Superman Homepage reporter Michael Moreno caught up with artist Joe Staton recently and asked him all about his career in comic books, working for DC Comics, and specifically his time working on Superman related characters.

Joe Staton, started working for DC Comics in the mid-1970s, having already worked for Charlton, Marvel Comics and Warren Publishing. The Inkpot Award winning artist worked on many Superman projects, including "Superboy and the Legion of Super-Heroes," "Justice Society of America," "Batman and Superman Adventures: World's Finest," and "Superman & Bugs Bunny".

The Superman Homepage would like to thank Joe for agreeing to do this interview, and for fitting it into his busy schedule. 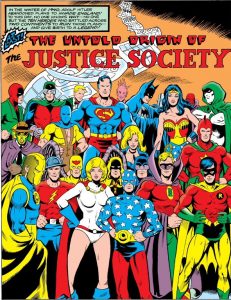 Q: How long were you a cartoonist before you started working with DC Comics and on Superman? When were you first commissioned to work on Superman?

A: I think I've always been a cartoonist but I started actually working in comics in 1971 for Charlton Comics. I was working on All Star/JSA for DC in 1977 and 1978. That would been my first chance to draw Superman. That was the Superman of Earth II, who was the original Superman from the 1940s. Our take on the Siegel and Shuster character. I think I came to working on the "contemporary" version of Superman in the late 70s and early 80s when I did several issue of DC Comics Presents, the Superman team-up book. I think was Marty Pasko who wrote the team-up with Sgt Rock and Easy Company, really nice inking by Jack Abel. It's hard to figure how you can make that team-up work but the story was actually very nice, with nice characterization of Superman. Another issue I liked was a cross-over with Dr Fate that Denny O'Neil wrote. It's always fun to have Superman cope with magical characters like Fate and this one had pirates as well. One footnote here is that E. Nelson Bridwell was actually editing the book at the time. I had swiped a nice pirate's coat from somewhere that I liked a lot. Nelson was a stickler for accuracy and objected that the coat was off by a century or so, so I had to change the coat. 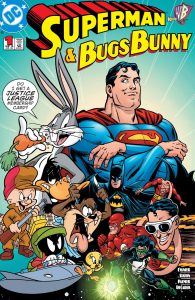 Q: You had worked on the four issue mini series comic "Superman and Bugs Bunny" in the early 2000s. What was it like working with both DC Comic's number one superhero, Superman. and Warner Brothers favorite rabbit Bugs Bunny? Is it a team up that you would like to work on again in the future?

A: Ah, a trick question. I really liked the idea of the crossed realities. Unfortunately, working with constant interference from Warners wasn't much fun. It was really hard on our editor Joey Cavalieri who was running interference. 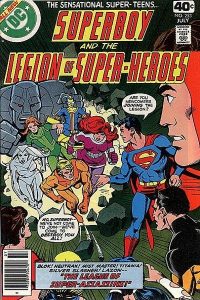 Q: You worked on "Superboy and the Legion of Super-Heroes". What was it like working on not just one, but multiple different superheroes?

A: Of course, I had that run on the JSA, so I had experience organizing sets of several characters at a time. One problem is that I like to bring in a lot of body language and postures to get the feeling across and it would get complicated. And I'm afraid I would lose track of details on that many costumes. I think I remember correctly that we got letters complaining that I would sometime put the wrong boots on characters.

A: Things have changed a lot in all sorts of ways. The technology has changed tremendously, newsprint and hand-done 4-color seps have been replaced by slick paper and Photoshop. Cons were just getting going good in the 70s when feedback was basically a matter of letters to the editor. The era of the giant superhero movies was off in the future. Artists and writers usually had to live near the NY offices of the publishers. Now they live all over the world. 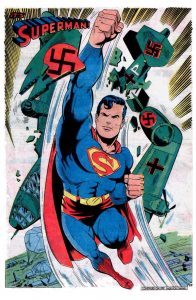 Q: What was it like working on the DC Special #29?

A: I really loved this project. How can you not love a job where you have the chance to draw the original Superman catching a Nazi A-Bomb before it hits the White House? Paul Levitz really got a chance to show off with this one. He was very deep into history and was able to work in real world history with FDR and practically every superhero around in the 40s. FDR was a great comics character. The Spectre got to be really terrifying showing Nazis the face of horror. Paul pulled it all together. I got to draw sorts of period things and think I did a really good job. Bob Layton was doing the Wally Wood-influenced inking that suited the period nicely. Anthony Tollin kept it clear with his colors. Yeah, I like that one. (Okay, we did have a few mistakes. Alan Scott did break a wooden door. Hawkman had the wrong headpiece. Anyway, it was fun.) 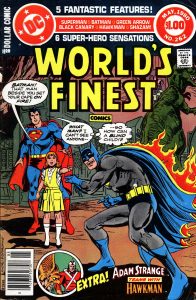 Q: Are there any super hero team-ups with Superman that you would like to work on in the future?

A: It would have been fun to do an adventure in space with Superman and the GL Corps.

Q: Over the years, Superman has incorporated various members into his Super family. One of which is Power Girl. What has your experience been like working with this superhero?

A: Yes, I came in very early in Power Girl's life. My understanding is that she was made particularly sexy and busty to please Wally Wood, the original inker. However, she also has to be treated as a serious hero as well to work. So there's a balance to the character. I particularly like the backups in Wonder Woman, where she teamed up with the Huntress. I'm pleased to see that she is still around. 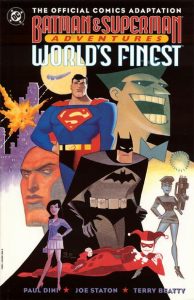 Q: Do you have a favorite Superman comic or Superman-related comic that you've worked on? If so, what is it and why?

A: I've always been at home with animated-style characters and I did a couple with Superman that I thought worked well. There was the World's Finest, adapting the animated version of Superman and Batman's first meeting. I especially liked the version of Lois Lane in that story. I also liked the Superman Adventures Annual from 1997 which featured lots of magic, with Zatara and tons of Monsters, all animated style.

A: I guess the standing advice is to be flexible. The skills necessary for a comic book artist transfer well to storyboards and character design for tv and movies and game designs. Try to keep your identity but be able to do it all. If you're working on Superman, I'd say respect him.


This interview is Copyright © 2019 by Steven Younis. It is not to be reproduced in part or as a whole without the express permission of the author.