Exclusive Interview with Jim Krueger on "The Dark Lantern"

Writer Jim Krueger talks to us about his "The Dark Lantern" 3-part story published in the "Adventures of Superman" comic book title.

The Superman Homepage would like to thank Jim for agreeing to do this interview, and for fitting it into his busy schedule. 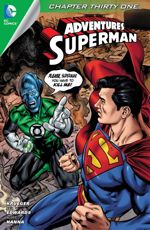 Q: Your entry into the "Adventures of Superman" comic book title is "The Dark Lantern", what can you tell us about this 3-part story?

A: Well, since the first part is out, I guess I can reveal the cliffhanger of part one. This is the story of a lost and alien Green Lantern who discovers the origins of Superman's original birth planet. He seeks out Superman for one reason, he wants Superman to kill him. The reason for this is simple. This Green Lantern, who is already suicidal and depressed, was the Green Lantern in charge of protecting Krypton. He's seeking out Superman and begging for Justice, and to an end to his own suffering. What happens after that is, of course, the rest of the story.

Q: How much input did you get to have with your artist Neil Edwards for this story?

A: Neil and I got a chance to email each other a lot, thanks to editor Alex Antone. Neil did such an amazing job. I even floated some of the pages to Alex Ross who, was blown away at just how good Neil is.

Q: To date, all the "Adventures of Superman" stories have shown Superman in his "classic" costume (with red trunks), do you know if that's something intentional, mandatory, or up to the individual writer/artist team?

A: I think the idea, especially because of how universal digital distribution is, is to do stories about Superman the way he's known best throughout the world and throughout the ages. It's more like the stories cater to the classic brand of Superman. Original Coke vs. New Coke. That sort of thing. 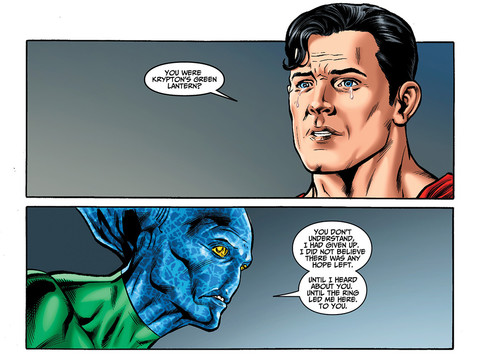 Q: Is this a story that Green Lantern fans will enjoy too? Or is the Lantern side of the story less important?

Q: Do you have any interest in writing further adventures of Superman in the future?

A: I would love to write more Superman. I have so many ideas. Including a "What Happens Next" to this story. And a way to approach Superman that we really have yet to see. One which embraces both the tragedy and hope inherent in his character and origins.

Q: Beyond this "Adventures of Superman" story, you collaborated with Alex Ross on a 12-issue "Justice" comic book series (2005-2007), can you talk us through your approach to Superman in that series? Was the Superman in "Justice" from a specific era? (i.e. Golden, Silver, or Bronze Age?)

A: The Superman I wrote in "Justice" is very similar to the Superman you see in "The Dark Lantern". If anything, the "Justice" Superman is sort of a mix between this Superman and that of the Christopher Reeve Superman (which I think is Alex's favorite movie and inspiration for much of what he does). It's the most universally known Man Of Steel. 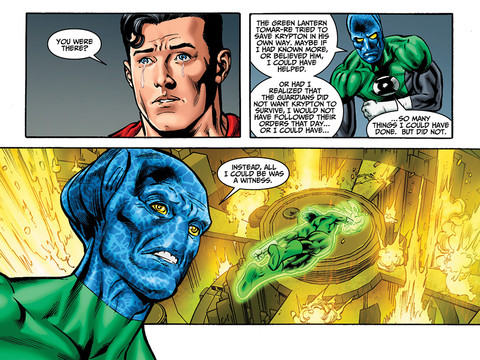 A: Lots of ideas, and probably best saved for a chance to write Superman one day. But here's something. In my mind, Superman should form the Justice League. He may not be the only one who could, but he's the only one that should. And the primary reason is that he knows his limitations. We see him as limitless. But that's not how he sees himself. He only sees what he's not able to do. He knows he can't save every cry for help that he hears. And it breaks his heart. And because of this, the Justice League is constantly expanding (and, of course, there would be consequences for that).

Q: What else are you currently working on that Superman fans might enjoy checking out?

A: One is already available on Amazon though it will be in Comic Shops in the spring. It's called THE HIGH COST OF HAPPILY EVER AFTER. It begins like every Disney movie ends - the big wedding - and then it all goes to Hell. It's deeply tragic, heroic and romantic. Then, in 2014, there will be two new FOOT SOLDIERS trade paperbacks from IMAGE. For those who don't know Foot Soldiers, it's the story of three teenagers who rob the superhero graveyard and use the power they find there to fight against the oppressive rule of their world. And also in 2014, OUTRUNNER, another creator-owned project, about a guy who's been on the run for over 80 years. What he's running from and just who is out there and after him is something like Terminator meets the Walking Dead. It's really fun. There's more stuff than this, of course, including a creator-owned HORROR project involving all the classic monsters and drawn by one of my favorite artists, but I'm not allowed to announce those things yet.

This interview is Copyright © 2013 by Steven Younis. It is not to be reproduced in part or as a whole without the express permission of the author.