Karl Kerschl is an artist who has worked on many Superman comics over the years.

Superman Homepage writer Jason Larouche interviewed Karl about his career, his work on the Superman comic books, and more.

The Superman Homepage would like to thank Karl for agreeing to do this interview, and for fitting it into his busy schedule. 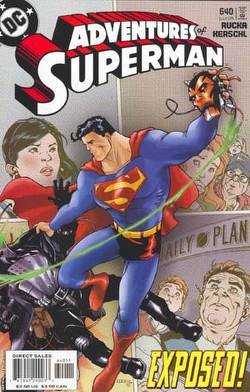 Q: At what point in your life did you develop an interest in art?

Karl: I don't remember. I was three or four years old. I've been drawing as long as I can remember. I used to draw little dinosaurs and comic book characters and eventually I reached a point around early high school where I wasn't drawing at all. And basically picked it up again when I became interested in comic books.

Q: Did you read any comic books as a kid? If so, which ones?

Karl: When I was younger I read a lot of --- I read Elfquest actually; I was a big fan of that. I read a lot of Tin Tin. Actually I read a lot of syndicated comic strips like Garfield [but] later on I became more interested in [books like] X-Men and Superman and stuff, mainly because I was following different artists and stuff.

Q: Can you name your creative influences?

Karl: Well, Bill Waterson, Harry J, Moebius, Mike Mignola, Kevin Nowlan, Bill Sienkevitz - a big influence on me - Frank Miller... Those are some of the bigger ones.

Q: Did you receive any formal education or training or is most of your skill self-taught?

Karl: Mostly self-taught. I went to school for a year after high school [for] visual arts at the University of Windsor, but I didn't finish there. It was more fine arts-related and I [was] more interested in pursuing illustration, so I left that program. I pretty much taught myself.

Q: What was your first professional assignment and what did you take with you from that experience?

Karl: My first professional assignment was a cover of Green Hornet for Now Comics many many years ago, for which I was never paid. I did three covers and they never paid me. The company folded.

Karl: Yes it does suck (laughs). 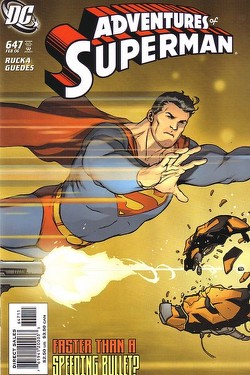 Q: Can you recall the first Superman project you pencilled?

Karl: Yeah, I did... I can't remember which one but it was one of the Return to Krypton books and then later on I had a regular stint on Adventures of Superman with Greg Rucka.

Q: When handling a character like Superman, whose only means of disguise are a change of hair style and glasses, can you describe any tricks in order to make the two distinct? And in your opinion, why does the disguise work so well?

Karl: I guess the only thing you do is really play with facial expressions and body postures. In a lot of my run, there wasn't much distinction between Clark Kent and Superman physically because Clark was depicted as a fairly competent reporter; he wasn't nerdy or goofy-looking. I didn't really spend a lot of time figuring out how to make these two personas distinct. I know I parted his hair on different sides, but I think what Frank Quitely is doing on All-Star Superman now is really a lot more effective. He actually gives Clark a slump, has his hair bedraggled, give him a kind of double chin. I think that's extremely effective and if I were to do it again, I'd follow that lead.

Q: In your opinion why does this disguise work so well?

Q: Superman, the first and greatest of all heroes, has become a staple for any comic creator to look to for inspiration when creating an original work from both a visual and literary standpoint. Now seventy years old and still going strong, why do you think the character has endured for so long?

Karl: He endures because is a really strong archetype for humanity and heroism in general. I think - I've mentioned this so many times I'm at a loss for words here - I think that the character feels, after being around for so long, more human, more real, than many other fictional characters. And he's in the human subconscious so much that people just accept him as another person in a way. I know I do. That's part of the reason why he endures, at least in my mind. That's why I keep coming back to that character.

Q: The Siegels recently acquired equal share of the rights to the Superman property. Do you feel the result of this dispute, which encompasses the fate of the Connor Kent character as well as the ongoing debate over Smallville's inspiration, is positive or negative? 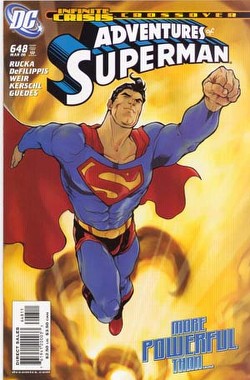 Karl: I think if any rights revert back to the original creators, I think that's a very positive thing. If that happened to Superman, the Siegel and Shuster estates get reimbursed for their creation, that's nothing but a good thing.

Q: With the socio-cultural fascination with comic book lore at its highest via television and cinema, what do you believe the direct cause is?

Karl: I think we've all wanted to see these characters come to life. It's just that the technology has caught up with them now. And you're able to get accurate depictions of these things on the big screen. Things they couldn't do realistically before. And I think that there's a lot of unbounded creativity going on in comic books and people in Hollywood are starting to discover that they can mine that maybe because they're running out of ideas.

Q: Stan Lee once said the villains are more difficult to create and sustain than the heroes. Do you believe this to be true and if so why?

Q: With so many Superman-related projects in the works - the movie sequel, Smallville's eigth and final season, and his upcoming role in the Final Crisis - which are you anxious to see?

Karl: I'm definitely interested in a sequel to the film if Bryan Singer is directing it. I'd love to see what he does that's his own after Superman Returns. While I enjoyed it, it was reverential to the original Donner material. I think Singer's probably got his own story in him somewhere that's a bit of a departure from that. I'd like to see what he does.

This interview is Copyright © 2008 by Steven Younis. It is not to be reproduced in part or as a whole without the express permission of the author.