Danny Fingeroth was the longtime Group Editor of Marvel Comics' Spider-Man line and has written many comics including "The Deadly Foes of Spider-Man" limited series, the "Avengers: Deathtrap: The Vault" graphic novel, and the entire "Darkhawk" series. He is the author of the books "Superman on the Couch: What Superheroes Really Tell Us About Ourselves and Our Society" and the upcoming "Disguised as Clark Kent: Jews, Comics, and the Creation of the Superhero," both published by Continuum, and co-author (with Mike Manley) of "How to Create Comics From Script to Print," published by TwoMorrows. Danny is editor-in-chief of Write Now! Magazine, also published by TwoMorrows, the leading publication about writing for comics, and teaches at The New School, NYU, and the Media Bistro. He can be reached at writenowdf@aol.com.

The Superman Homepage would like to thank Danny for agreeing to do this interview, and for fitting it into his busy schedule. 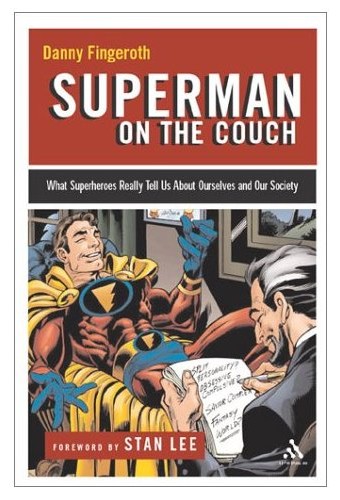 Q: You note in your book that a hero is someone who rises above their own fears and limitations to achieve something extraordinary, the best of ourselves. Why do you suppose, in a society that's capitalistic and dog-eat-dog by outside nature, our heroes are so pragmatic and altruistic?

Danny: In so-called real life, people are often forced by circumstances to compromise their ideals and ethics. What we admire about heroes, fictional and real, is that they seem able to rise above the petty concerns of the rest of us humans and do the right thing. What makes such stories the most compelling is when we get to go through the process of decision with the hero so we realize just what the character gives up by making the choices he or she does.

Q: What heroes do you feel best embody the spirit of heroism, and why?

Danny: In terms of superheroes, I'd have to go with the Superman and Spider-Man models. Spider-Man, especially, continually rises above his own personal needs so that he can do the right thing.

Q: Do you have any "heroes" that you feel misrepresent the aforementioned pragmatic spirit?

Danny: When the Punisher and Venom got their own titles--for understandable commercial reasons--despite the fact they were always portrayed as unstable killers, they certainly seemed to be "heroes" simply because they headlined their books and fought villains who were even worse than they themselves were. These headliners were characters who didn't kill just in self-defense, but who did it whenever they wanted to.

Q: You note in your book that a superhero has to have a special power, but it's also quite often a mainstay of a hero book to de-power a hero and show them behaving heroically, in an imaginary or an in-continuity tale. For instance, a few years ago Superman lost his powers in an insane asylum, but nonetheless fought to do his heroic duty. What's more important, the novelty of powers, or the heroic, altruistic nature of the hero?

Danny: They're equally important. But a set of powers and abilities without a person who possesses them is a robot. We like to be reminded that a hero's character is what makes him or her a hero. Of course, in a superhero comic, there then is the problem of how to give readers their regular dose of superheroics while telling such a story. The classic "Battle of the Baxter Building" Fantastic Four two-parter by Lee and Kirby is a classic solution to this problem. In it, the heroes simulate their powers mechanically, and the super-powered Daredevil helps them face the overwhelming forces arrayed against them by Doctor Doom, who has turned the defenses of the FF's own headquarters against them.

Q: Your book focuses on the agelessness and lack of change in the hero myths comics present. Why do you suppose this continues? Do you see it as a good thing, or a bad thing? If superhero comics were to suddenly make death permanent and establish a period of time and age, as many independent books do, do you think it would lead to new heroes regularly, or death of the form?

Danny: It's a moot point. No one is permanently killing the lead character in a multibillion dollar franchise like Spider-Man or Superman. The reasons the movies always go to Peter Parker/Spider-Man and Clark Kent/Superman is because these myths work and are known and loved by people the world over. Look how many characters have been Thor over the years. Look how many Supergirls there have been. The stories of these characters may be better or worse depending on the writers and artists telling them, but there is no real 25 words or less descriptions of who they are and what they're about. And you can bet when and if they do movies of these characters, Thor will be disabled physician Don Blake and Supergirl will be Superman's cousin and her secret identity will be Linda Lee Danvers.

Q: Following up on the holding pattern of character, what do you think of attempts to make comics linear and progressive in continuity, such as the Byrne Superman? What would you say to fans who prefer an ongoing story with ramifications that disallows a return to the status quo?

Danny: As I recall, Byrne's Superman reboot didn't radically change anything about the character. It simplified and streamlined some things and changed some details to his origin and about Krypton. I guess the biggest change was that is established the Kents were still alive. This was an interesting but not radical change. Superman could still be portrayed as an orphan (since Jor-El and Lara were dead) when a story called for it. But a kid could go from a Superman coloring book to a Byrne Superman without getting confused. Which is a good thing.

I'm sorry to sound like a broken record here, but the second part of your question really doesn't apply to the archetypes we're discussing. I think having stories about characters that age and change in real time is a great thing. I think there's an audience for it. But it will never happen with big-dollar franchise characters. Too many people depend on them financially. And, really, it's how the audience wants to see their characters. The audience for the Spider-Man movies hasn't read 25,000 superhero stories. They're not jaded with the archetypes. For them, superheroes aren't an obsession or even a hobby. They're a genre of entertainment they like to periodically enjoy.

Q: In the book, you discuss superheroes, and why they bring people the feeling of stepping in for world events that they can't control. That's a fair point. Superman, however, doesn't mess around in Iraq. He fought World War 2, but he hardly touch and subsequent military conflict. The medium retracts from controversial large fights, but takes on the metaphorical elephant in the room. Why do you think this is so?

Danny: Superman did little or nothing to fight the war beyond the covers of some of his comics in W.W.II. He battled saboteurs on the home front, but never fought in a real country in Europe. (There was that two pager in Look magazine where he defeated Hitler and Stalin, but that was never part of the official canon.) I think the companies quickly realized they had to sidestep the question of Superman fighting in WWII. If he was to participate, then why wouldn't the war be over in two days? Obviously, because Superman isn't real and couldn't stop a real war. Captain America, with more limited power, could fight regularly in skirmishes and battles in WWII because that wouldn't affect the overall outcome of the war. In modern wars which are almost never universally approved of, it's unlikely you're going to see a superhero take sides.

Q: A quick one: Where do you place Superman in the pantheon of superheroes?

Danny: At the pinnacle. He started it all and there wouldn't be a superhero genre, perhaps wouldn't even be commercial comic books without the character. (Art-comics is another story, and even there, the creators of such comics and graphic novels mostly started out reading Archie Comics and superhero comics.)

Q: You note that the general public doesn't think of the deconstruction and decompression storylines now popular in some circles as superheroes. I agree. Do you foresee the current modus in that regard continuing and becoming the standard people are writing in fifty years, or do you believe comics are heading back toward an open, unchanging series of storylines?

Danny: I have absolutely no idea.

Q: Following up on that, do you prefer the "six issue arc" phenomena that is embodied by said decompression?

Danny: I just like good stories that keep me wanting to come back for more. I don't care if they're one page or a thousand. I would say that it wouldn't hurt for there to be more visual recaps from issue to issue when these stories come out in monthly installments. A recap page of visual flashbacks that could then be removed for a collected edition would seem to me to be a good idea.

This interview is Copyright © 2007 by Steven Younis. It is not to be reproduced in part or as a whole without the express permission of the author.