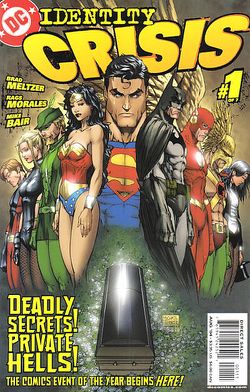 Q: Was Identity Crisis a story designed to introduce a sense of "maturity" into the Bronze age or be a good mystery story or both, and if so, how successful do you think you were in conveying those messages with the series?

A: Of course both, but let me clarify on the word "maturity." To me, Identity Crisis was a tragedy first and foremost. It's not singularly about "realism" or "maturity" -- it's about the hero's life and the costs of it. One of the key lines for me was what Ollie says about Batman in the end of issue 7: "Bruce knows what he wants to know, and more than any of us, he also knows that you should never underestimate what someone will do for the people they love." It is one of the most vital lines in there, not just as it drives at Batman, but as it takes on the themes of the entire series. Look at it in the context of every relationship in the series, from Green Arrow, to the League, to Boomerang, to the Drakes, to Clark, to Ray and Jean, etc, etc. To say that if I examine those relationships, I'm therefore a certain kind of book, and thus, no longer a mystery... Well, that just turns the entire genre into a trap. For me, Identity Crisis was an examination of that heroic life, in the obvious context of a mystery. I just wanted to use the genre to examine deeper issues.

Q: Why does Jean Loring know every heroes' secret identity, and most especially why does she know the secret identity of the third Robin when she and Ray had split up long before Tim assumed the Robin mantle? (In particular, the issue of Tim's secret identity being a secret even from other heroes has been addressed in Teen Titans and Robin)

A: You mean besides the fact she spent hours at a funeral with every hero in the DC Universe, including her ex-husband, who all trusted her and would talk openly around her?

Q: Presumably the ultimate parentage of Captain Boomerang's son will be determined in the pages of The Flash, but were you ever tempted to address that issue in Identity Crisis and tie it into the motive for the murders and possibly a different identity for the killer?

A: Nope. It was always Jean. It never changed from Jean. And in my mind, making anyone else the killer (Boomerang couldn't pull it off, neither could Jack Drake) would ignore the overall themes of the series.

Q: In Super Team Family #11-14 (1977), in what is arguably the first DCU crossover event, Jean Loring goes crazy and some, myself included, noted that she therefore had a history of mental illness. How did this factor into your tagging her as the killer?

A: Obviously, it was in the back of my head (no pun intended), but to be honest, I don't think she's "crazy" when she kills Sue. That's an accident. She's crazy in issue 7 when she can't accept what she's done and slides away from her own self-created reality. In the end, I didn't want that knowledge of her past to be something that had to be known by the reader. I wanted it to be something that added a layer for those who did know, but simply not matter to those who didn't.

A: I'd say that's an opinion that ignores what we did to Batman, Superman, and the entire League. And being completely honest, Firehawk, Black Lightning and Katana are only secondary characters because they're treated that way. My goal was to treat even those characters with as much attention as the big three.

Brad Meltzer's new novel The Zero Game will be published in paperback early February, while Jack & Bobby, the TV show he co-created returns Wednesday January 26th on the WB.
This interview is Copyright © 2005 by Steve Younis. It is not to be reproduced in part or as a whole without the express permission of the author.