J. Michael Straczynski participated in an exclusive interview with the Superman Homepage to discuss the third volume in the "Superman: Earth One" graphic novel series.

The Superman Homepage would like to thank JMS for agreeing to do this interview, and for fitting it into his busy schedule.

With SUPERMAN: EARTH ONE on its third volume, we have to ask, is this where you thought the Earth One series would go? Was Volume Three planned and if so have you known since Volume One where Superman would end up?

J. Michael Straczynski: Yeah, this was the plan from the git-go, when we showed the back of someone speaking to the residents of another world about the possibility of destroying Krypton. Sooner or later we had to turn that guy around and let the readers see who it was... so yes, we're right where I'd hoped we would be in the story.

How was writing SUPERMAN: EARTH ONE, Vol. 3 different from writing the previous ones or anything else you wrote in comics?

JMS: That's kind of a big question, but to try and wrestle it to the ground... v3 is the third act of the story we began with v1, so it's consistent with those previous volumes in tone and approach. However, we (and Superman) discover things about his past, and Krypton, that change the character in profound ways. If there's a difference within the books, it's that the first two volumes, despite having stand-alone stories, were a lot about set-up, so v3 is all about payoff, so it moves a lot faster.

In terms of the body of my work, Superman has always been my number one icon, the character who sustained me as a kid in ways no other character ever has or could. You literally cannot go into any room in my house and not see Superman artwork or artifacts somewhere. As a kid who came from nothing and nowhere, with a brutal family life and nothing but limits in front of him, a character who could do anything, who could fly away from his surroundings, and could not be hurt... yeah, that meant everything. 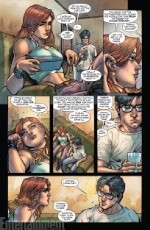 What was it like working on this book knowing Shane Davis wouldn't be involved? Did it change the way you approached the story or the process of writing working with Ardian Syaf instead?

JMS: You can't let that affect the story. I wish Shane hadn't opted out before the end of the story, but Ardian has done a spectacular job, putting his own stamp on the artwork while remaining tonally consistent with the first two volumes. It's a beautiful, beautiful book. So no: no changes to the story, which I think was actually well into the writing process when we found out that Shane had moved on.

Why wasn't Shane involved in this third volume? And did you get to pick his replacement?

JMS: You'll have to ask Shane.

As to the story itself, the Lex Luthor story plays out in a very different way to what many fans might expect. What inspired the choices you made with Lex and his whole situation?

JMS: Making it different and fresh is, of course, a part of the mandate. But that said: I've always been fascinated by Lex, especially coming at him from a Silver Age perspective, which was my introduction to the character. There were stories where he was very sympathetic, when he wasn't just a really, really smart bad guy. There were layers to the guy, and a loneliness that sometimes doesn't come through in later iterations. So I wanted to explore what it would be like to be that person, to always know you're the smartest guy in the room, and the isolation of that... and what happens when a beautiful woman every bit as smart as you are enters the room and you discover that you're not alone any more. That can have a very healing effect on one's darker side... until and unless one loses it, of course... 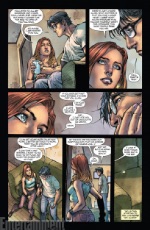 Clark seems a lot more confident and less introverted in this third volume, was that a major focus for you in writing this story?

JMS: The story is, in part, about Clark growing into his role as Superman, and on his own in Metropolis as Clark, so now, three books in, he's had a fair amount of time as both of those things, and yeah, there's a bit of a confidence boost there. He still tends to keep to himself, but it's more choice than reflex, if that makes sense. The flip side, however, is that his growing confidence led him to make a critical mistake when he knocked over the government of Borada in v2. That mistake comes back to haunt him in a big way in v3.

You've made an interesting choice for the "love interest" angle in this book. What do you think will be the reaction from long-time Superman fans?

JMS: Here's the thing: I think affection and love have to be earned, they can't come too quickly. Clark is the new guy in town, Lois barely knows him yet, and he scooped her on the interview of the century. So he has to overcome that. Similarly, as Superman, he is the story that Lois is covering, and a reporter has to keep some measure of distance from the subject you're writing about to remain objective. To have Lois fall right into Superman's or Clark's hands right after they meet felt disrespectful to her character. She's smart, independent, talented... let's have Clark work for her affections for a while. 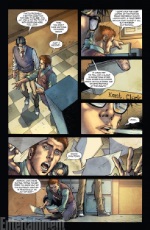 That said, I didn't want Clark to be entirely alone, so that led to the creation of Lisa, who is bright and charismatic and funny and keeps nudging her way into his life. He's not entirely sure what to make of her, but he likes her, and she likes him, and neither of them knows if this will ever go anywhere... they just know that they enjoy one another's company.

There's a lot more exploration of the history of Krypton in this volume... indeed it's crucial to the major plotline. Did you feel that it was important for Superman to find out more about his homeworld at this point in his journey?

JMS: We are all, to a degree, defined by where we come from. Clark has been shaped by his time in Smallville; now it's time to shape Superman a bit more by learning more about where he came from.

I'm guessing, from the ending, that there are plans for a Volume 4?

JMS: DC wants me to keep doing the book for as long as I'm having fun with it. So that being the case, with luck and longevity, I'll be doing this for a while to come.

Purchase "Superman: Earth One - Volume Three" from our Online Store now in Hardcover format or for the Kindle.

This interview is Copyright © 2015 by Steven Younis. It is not to be reproduced in part or as a whole without the express permission of the author.