Many thanks to reviewer Seth Isaacs. 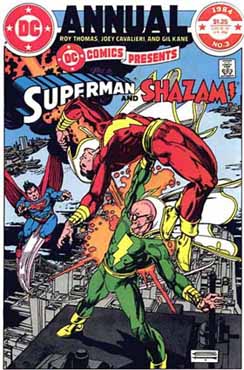 "With One Magic Word"

A giant robot is attacking New York, and Superman flies in to save the day. An X-ray vision scan of the robot reveals that it is under the control of Shazam's archenemy, Dr. Sivana. The robot smashes an unprepared Superman and knocks him through a building. But Superman recovers quickly and punches the robot's head (with Sivana in it) off. The robot's body collapses, but the head exhibits the ability to fly on its own, and Sivana flees the scene with Superman following. However, Superman hears a woman screaming for help in the rubble of one of the building's that was knocked down by the robot, so he lets Sivana escape in order to save the woman from being crushed by falling debris. Seeing that Sivana is gone, Superman returns to the Daily Planet and charges back to Clark Kent.

Meanwhile, Sivana has fled back to his dimension, Earth S, and goes to the Rock of Eternity, where he has mesmerized the wizard Shazam and put him in a deep trance. The trance will apparently only last for a short time, so he wants to make good use of it by preparing his attack against Captain Marvel.

A short time later, Sivana's ship hovers over an Earth-S city. Sivana announces that if Captain Marvel doesn't come out to face him within an hour, he will vaporize the city. Hearing this announcement, Billy Batson excuses himself from the radio station he works at, and says his magic word. But Sivana is ready, and his machinery splits the Billy's magic lightning bolt into two forks. One fork turns Billy into Captain Marvel, the other fork hits Sivana and turns him into Captain Sivana, making him just as powerful as Captain Marvel. Captain Marvel flies up to meet Sivana, and they exchange blows. Sivana's punches hurt Captain Marvel, who finds himself lacking the stamina of Atlas and the speed of Mercury. Sivana easily beats Captain Marvel and flies off with him.

Watching this take place on the ground are Mary Batson and Freddy Freeman. Seeing Captain Marvel beaten so easily, they say their magic words, changing into Mary Marvel and Captain Marvel, Jr., and fly off in pursuit. Seeing that he's being followed, Sivana throws his ship at the ground to distract them, while he flees with Captain Marvel to the Rock of Eternity.

Once at the rock, Sivana reveals to Captain Marvel that by forking Billy's lightning bolt, he was able to siphon off all the good qualities of Shazam's patrons, such as the wisdom of Solomon and the strength of Hercules, leaving the Captain with only their bad qualities, which is why he's so weak. He then flies the captain down to the base of the rock, where he carves out a small cave, and seals the Captain up in it. Without the strength of Hercules, the Captain is unable to free himself.

At this point Mary Marvel and Captain Marvel, Jr. arrive at the rock. But Sivana uses his own genius combined with the wisdom of Solomon to outwit them. He tricks them into thinking he is flying around the rock and through time. Uncertain of which direction he's headed in, Captain Marvel, Jr. looks for him by flying into the future, while Mary Marvel flies into the past. But Sivana has really stayed in the present, and once Mary and Junior are gone, he uses Shazam's power to create a time storm that prevents them from returning to the present. Sivana is so happy with his success that he promotes himself from Captain Sivana to Colonel Sivana. Sivana basks in his victory and proclaims the universe his own, but then it occurs to him that Superman is still alive in an alternate dimension, and may cause trouble for him.

So Sivana flies off Superman's dimension, thinking to find him somewhere around the Daily Planet. However, Sivana is confused when he arrives in Metropolis and finds the Daily Star instead of the Daily Planet. A nearby police helicopter sees Sivana and flies over to investigate. This is a mistake as Sivana attacks it. At the Daily Star, it's white-templed editor Clark Kent (for Sivana has mistakenly traveled to Earth-Two instead of Earth-One) hears the copter pilots call for help, and changes into the Golden Age Superman to investigate. He quickly saves the coptor pilots, and then attacks Sivana.

Sivana proves to be stronger however. He beats up the Golden Age Superman fairly easily (since he isn't as strong as his Earth-One counterpart), and flies him into space, where he chains him to a large Kryptonite meteor and leaves him to die. Before leaving however Sivana breaks off a chunk of Kryptonite for his own use, because by this point he's realized that he flew to the wrong dimension, and knows that the Kryptonite will be useful in beating the Earth-One Superman. He is so happy with his success that he promotes himself again to General Sivana.

Meanwhile, due to their lightning bolt connection, Captain Marvel has been watching all of this while trapped in his cave, but he cannot break free yet.

On Earth-One, Clark and Lana are getting ready to tape the nightly WGBS news broadcast. The tape is just about to roll, when Sivana busts in through the wall, sending debris flying. Clark jumps in front of Lana to protect her from the debris, and pretends to be knocked out by the impact. Clark's body gets dragged out of the room by the fleeing stage crew. Sivana grabs Lana and tells her that she is his new PR lady. They setup a TV broadcast, where Sivana announces that he is the new ruler of the planet. Meanwhile Clark has changed to Superman, and he comes up behind Sivana, and taps him on the shoulder before punching him straight out of the WGBS building. Superman and Sivana proceed to fight, and it's an even fight for a little while, until Sivana takes out his chunk of Kryptonite. At that point Superman gets weak and Sivana starts to beat up on him.

Meanwhile, Captain Marvel has been watching all of this, and is still trying to get out of the cave he's been sealed in. Fortunately the Captain's patrons start to talk to him, and he realizes that he can never lose their abilities as long as believes in himself. Realizing this, he finds the renewed strength to break out of his cave. He then flies to Earth-One, where he prevents Sivana from dealing a deathblow to Superman. The Captain then tells Superman to hurry to Earth-Two to save the Golden Age Superman, while he fights Sivana. Superman flies to Earth-Two and rescues his counterpart who is on the brink of death.

Meanwhile Captain Marvel is punching Sivana so hard that the shock waves wake the wizard Shazam in the Rock of Eternity from his mesmeric trance. Realizing what Sivana has done, the wizard draws his power from Sivana who reverts to normal. Without any powers, Sivana is easily beaten by Captain Marvel, just as both Supermen arrive on the scene. Shortly afterward, Mary Marvel and Captain Marvel, Jr. arrive on the scene as well. The two of them take Sivana and return him to Earth-S to face the law. The Golden Age Superman returns to Earth-Two, and Superman and Captain Marvel shake hands before departing.

Story - 3: This could have been a much better story, but it loses points for being nothing but one long series of fights. For a criminal genius, Sivana sure acts like an idiot. He puts the wizard Shazam into a trance which will only last for a limited time, and rather than take advantage of it right away, the first thing he does is take his giant robot and go to Earth-One to fight Superman, wasting valuable time in the process. Although I suppose the writer felt like he had to do something to get Superman in the story early, otherwise the Earth-One Superman (whose book this is) wouldn't have shown up until page 27 of a 40 page story. It was nice to see the Golden Age Superman put in an appearance, but not so nice to see the world's first superhero beaten so easily. Each hero in the book fights Sivana on his/her own. It would have been nice to see them all team up in the end to take him down. This is really the story of Sivana acquiring, and then losing, Shazam's powers, and the two Supermen that appear in it only play a supporting role. This story could have been handled as a regular issue of the Shazam comic, without Superman, and it would have been a much better comic. For Shazam fans this comic is a must, for Superman fans it will only be mildly interesting.

Art - 5: Gil Kane is at his best here. While I have some problems with the story itself, Kane does a great job in making the action dynamic. Seeing that Kane was given an assist with the story, my suspicion is that he influenced the plot so that he would be able to draw to his strengths. This comic is well worth picking up for the art alone.

Cover Art - 5: Kane's cover is exceptional, and serves as a good preview of the story within, depicting Sivana with the power of Shazam, holding a limp Captain Marvel over his head, with Superman flying to the rescue.