Episode 1: "Superman" (AKA "The Mad Scientist") 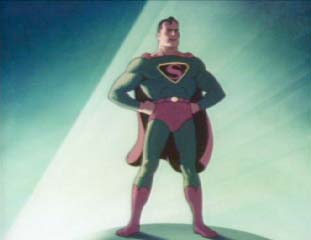 The series and episode begin with the typical short narrative of Superman's origin. Kal-El's ship speeds away as Krypton explodes. The ship lands on Earth and the baby is found and raised in an orphanage (as was still the story at that point). The announcer then gives a brief description of Superman's powers and his decision and reasons for his Clark Kent disguise.

The episode story then kicks off in the office of Daily Planet Editor Perry White. A threatening note sent by a scientist claims his 'Electrothanasia' ray will strike at midnight. Perry tells Clark to investigate, but Lois insists on checking into the story on her own. She climbs into the pilot's seat of a plane and takes off.

In an ominous-looking tower, the scientist and his buzzard sit brooding. He rises, saying "The hour has come!" and activates the ray. The buzzard, hears Lois' plane approaching and alerts his master, who shuts down the ray.

Lois knocks on the tower door and the scientists grabs her, pulls her inside, and binds her in a chair. He then reactivates the ray and destroys a bridge. A radio announcer tells the city of the destruction. As the rest of the staff listens, Clark realizes, "This is a job FOR SUPERMAN!" He steps into a closet and we see his silhouette in the window as he quickly removes his disguise. The main theme plays as he looks to make sure the coast is clear and then leaps out a window and up.

The ray fires again and hits a city building. Superman changes direction and catches the building as it falls, steadies it, then lands at the base and intercepts the ray. He struggles a bit, and then takes off flying up the beam. The scientist increases the ray's intensity and knocks Superman to the ground.

The Superman theme swells again as he musters his strength and leaps back into the air, punching the beam. Superman bends the ray cannon, causing it to backfire and explode. He breaks through the wall of the tower, unties Lois and carries her in pursuit of the scientist. Catching the villain, the Man of Steel soars back to the city and throws the scientist in a cell.

Back at the Dailt Planet building Lois tells Perry she got the story thanks to Superman, and Clark smiles and winks at us.

Rating - 4 (out of 5): The Animation/Story: These were very complete stories considering they only lasted 10 minutes.

The best part about these Superman cartoons is the animation. As an artist myself, I can highly appreciate the style of this series. The people move LIKE PEOPLE!!! The fluid and grace of the character movements, particularly our hero in action, are more visually stunning than even much of the animation we can see today. As the ray destroys the bridge, the concrete melts away. Superman's cape flutters naturally behind him. The only animation flaw is the movement of the plane and falling building in a rubbery, curvy sort of fashion.

As far as the development of the art, I simply find issues with the choices made. The scientist has a slight Asian look to his features. This is a good indication as to the prejudice of the time. The artist chooses an image that will be associated with what was perceived by many as evil. Thankfully, these negative connotations can be overlooked as a mistake of the era.

The "cartoony" buzzard is the other odd choice of this episode. His human-like mannerisms suggest a more humorous form of animation. The kind used for talking animals. It doesn't holdup with the basic realism of the rest of the show.

Yes the physics of the episode are questionable at moments. The punching of the ray beam seems to defy logic, but it looks cool. The building cannot possibly still stand after Superman rights it, but it would waste time for him to have to secure it. The creators wanted to get to the action.

I take small issue with Lois behind the controls of the plane, only because it makes me wonder just how many talents she has. Plus she apparently has her own plane. But, oh well.

It always amazes me when villains pick on his home town, and then seem to forget Superman. As the hero punches his way through the ray beam, the scientist screams, "I don't believe it. He isn't human!" Yeah, you know who he is, don't you?

[Editor's Note: Although it should be noted in these early cartoons that Superman was a figure of mystery unknown to the average person, as evidenced by the newspaper headlines seen in many episodes.]

I had to laugh at the name of the weapon. 'Electrothanasia' Ray. Is there a more nonsensical word? But then, to my surprise, I 'Googled' the term just to be sure, and it seems to be real. Go figure. Ah well, guess my vocabulary needs some expanding.

The Fleischer cartoons add a final item to their charm: The trademark wink at the end of the episode. I love this way of letting you know you were in on the joke while Lois was left wondering.

The Voices: Clayton "Bud" Collyer is a great Superman voice. I hope he enjoyed the role because I enjoy him in it. Mark Hamill says it best in more than one interview. Collyer's switch between high soprano for Clark Kent and low baritone for the Man of Tomorrow is the reason the secret identity can be believed. More even than the glasses, the difference gives a complete change in personality. The softer voice is the perfect compliment to the mild-mannered reporter image, while the assertive Superman pitch lets you know this is not a man to be messed with.

Joan Alexander gave her character a fine complimentary voice to the sultry drawings provided for Lois Lane. She is tough, but beautiful. Not afraid of the danger that comes with her job, yet any man would fight to be the one to rescue her. This was the quintessential Lois.

Jackson Beck as the Narrator & Perry White used his voice to punctuate the suspense. His is an original action-announcement styled voice.

The Music: Now, I believe you can't review a Superman cartoon without rating the musical score. And I give this one 4.5 out of 5 when compared to other Superman themes (John Williams being a 5, the Kirk Alyn serials theme being a 1, IMO). Being the first Superman theme, it truly set the standard for what was to come.

Sammy Timberg uses a 3-note base line to give the Man of Steel's adventurous moments a quick-paced excitement. Did he choose to make the main them a 3-note sound on purpose? Was it no coincidence that he selected an arrangement that fits with the syllable count of the hero's name? "SUP-ER-MAN!" We'll probably never know if this was intentional, but it's what I choose to believe.

From there on, almost every other Superman theme composer uses the score to announce the arrival of our hero with a bold, brassy fanfare that seems to sing his name. I doubt I need hint too hard at my favorite, composed by a certain man with initials J.W. But without Timberg and his legacy, would the succeeding Superman themes have been as magical?

Furthermore, the climbing trumpets as Clark changes to Superman are one of the most exciting quick-change music of any Superman version. The music gives the sense of urgency, but also of hope that help is on the way.

The Timberg Superman theme will forever hold up with the many heroic scores it preceded. It provides nostalgia for those who grew up with it; and a link to Superman's original adventures for all who love the primary colored icon.

All in all, this is a great premiere to the series. The fact that the art holds up over time gives the show extra bonus points. For a Superman fan, these cartoons are exciting to watch, even as an adult.

Back to the "Fleischer Superman Cartoon Reviews" Contents page.