The Superman Celebration has sent out the following press release announcing the guests for this year's 4-day festival, adding Cassidy Freeman to the previously announced guests.

The Superman Celebration is proud to announce the Celebrity Guest line-up for this year. Appearing on Saturday, June 9 will be Smallville actors John Glover & Cassidy Freeman.

John Glover has appeared in 145 episodes of Smallville from 2001 - 2011 playing Lionel Luthor, creator of LuthorCorp and Father of Lex Luthor. 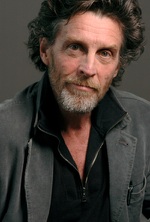 On television he has appeared in An Early Frost, Nutcracker: Murder, Money, and Madness, Brimstone as the Devil, Smallville, and Heroes. 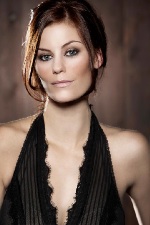 Cassidy Freeman burst onto the scene as quirky, high-tech thief, Veronica Sharpe, in the award-winning short film, Razor Sharp. In September 2008, Freeman began starring in the Superman-inspired science fiction drama, Smallville, playing Tess Mercer Lex Luthors' efficient successor who takes over LuthorCorp when Lex disappears as acting CEO. Freeman appeared in 64 episodes of Smallville from 2008 to 2011 until the show ended in May 2011. Freeman appeared in the crime drama CSI:Crime Scene Investigation as well as CSI: Miami, and CSI: NY. She had the role of Sage on the The Vampire Diaries in 2012 and had a role on The Playboy Club playing Frances Dunhill. Freeman starred in the thriller film YellowBrickRoad which was written and directed by Andy Mitton and Jesse Holland. Freeman is currently working on the new A & E series Longmire which will premiere June 3 of this year.

John Glover and Cassidy Freeman will be appearing during the Superman Celebration Saturday, June 9. Four Autograph Sessions will be held in the conference room at Banterra Bank located at 101 West Eighth. Glover and Freeman will participate in a Q & A at the Metro Tent at 11:30 AM. Tickets are required for the autograph sessions. Tickets will be handed out at 7:00AM on Friday, June 8 and again at 7:00 AM on Saturday, June 9 until they are gone. Tickets are free and only one ticket per person will be given. 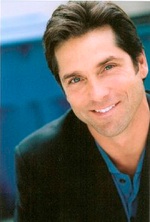 Gerard Christopher is best known for his portrayal of the classic American comic super hero Superboy and his alter ego Clark Kent in the Viacom production of The Adventures of Superboy which aired internationally from 1988 to 2000. Christopher would later become both a writer and producer on the series. Christopher guest starred on daytime soaps such as Days of Our Lives, Sunset Beach and primetime soap, Melrose Place.

See the Celebration schedule book or visit www.supermancelebration.net for times and information. 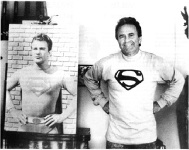 Metropolis will have not one but two Superboys in town! John Rockwell will be joining Superboy Gerard Christopher in Metropolis, Illinois for this year's Superman Celebration June 7-10.

John Rockwell was the first actor to play the role of Superboy in a pilot for the proposed series, The Adventures of Superboy in 1961. The Superboy pilot was created and produced by Whitney Ellsworth, producer of the classic 1950's television series, The Adventures of Superman starring George Reeves. This was Ellworth's second attempt to revive the Superman franchise, the first was in 1957, when he produced a pilot for The Adventures of Superpup, a pilot aimed at young children in which actors (all of whom were little people) wore oversized dog masks. The Superboy series was shot in Black and White and 13 scripts were written in anticipation of the show being picked up. While working at ZIV/UA studios, John heard of the series and approached Ellsworth for an audition and was eventually cast in the role of Superboy. The series was deemed too costly and was not picked up for distribution. The 13 scripts were never filmed.

Rockwell studied acting with Agnes Morehead at 20th Century Fox. He appeared in The 80 Yard Run (1958) starring Paul Newman, As Young as We Are (1958) starring Ty Hardin, Please Don't Eat the Daisies (1960) starring Doris Day, and Bus Riley's Back in Town (1965) with Ann Margaret. Rockwell has also appeared on Ozzie and Harriet and Dobie Gillis. Rockwell continued to act professionally until 1967.

This will be Rockwell's first appearance at a convention. Gerard Christopher played the role of Superboy from 1989 to 1992 in the popular television series, The Adventures of Superboy. It will be great for fan's to meet two Superboys from two different era's. Superboy is a character created by Jerry Siegel and Joe Shuster who first appeared in More Fun Comics #101 in 1945. 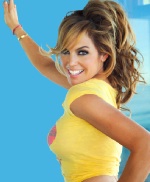 Also appearing will be Special Guest Sandra Taylor. Taylor began her career as the #1 selling poster model and quickly became a featured endorsement model for mega companies such as, Anheuser Busch & Revlon. She has graced the covers of Cosmopolitan and many other worldwide publications and was a GUESS model and spokesperson. Taylor made the move to TV and Films and has quite a list of appearances. On the small screen, her list of credits include: Just Shoot Me!, Married... With Children, The King of Queens, Son of The Beach, & ER. Taylor has also had roles in feature films such as: Phoenix, Exit to Eden, The Princess Diaries, The Princess Diaries 2: Royal Engagement, L.A. Confidential, Tomcats, Raising Helen, Batman & Robin, Under Siege 2, One, Two, Many, Player 5150, Valentine's Day, All's Faire in Love, and New Year's Eve.

The Superman Celebration is hosted by the Metropolis Chamber of Commerce and sponsored by the City of Metropolis and Metropolis Area Tourism Commission.

This is the 34th annual Superman Celebration in Metropolis, Ill. and is held the second weekend in June. For more information, contact Metro Chamber at 618-524-2714, 800-949-5740 or email office@metropolischamber.com.

WSILTV.com interviewed Josh Boultinghouse, the official town Superman for the annual Superman Celebration taking place today until Sunday in Metropolis, Illinois, asking him how he got involved with the 4-day festival, what we can expect from this year's Celebration, and how he keeps his super physique.

Larry Thomas Ward, Noel Neill's friend and manager sent us the following report regarding a surprise appearance the First Lady of Metropolis made at Saturday's Superman Celebration in Metropolis, IL at a panel with author Larry Tye, actors Gerard Christopher and Johnny Rockwell, and author Larry Ward. Looking happy and content, she took no questions but happily posed for dozens of photos with very happy fans and friends, many of whom were visibly moved by her appearance.

When she arrived at 1 pm the room was sparsely populated, but word spread quickly of her appearance and by 1:15 the hall was packed. By 2 pm the panel was over and Noel announced herself "exhausted" and I drove her back home.

She was glad she had attended, but was also glad she had not committed to a full day of appearances. Ę Later in the evening - while Noel was fast asleep - a viewing of several episodes of The Adventures of Superman took place during a tribute to Noel Neill. ĘIt was a good day for everyone.

Look for more reports and photos from the 2012 Superman Celebration soon.

We'll soon be posting some video footage from all the events that took place during the 2012 Superman Celebration last week (June 7-11). But until we do, we thought you'd like to see a select group of photos.
Photos courtesy of the official Superman Celebration Facebook Page, Larry Thomas Ward, and Kenny Richardson.