This page was launched on January 17, 1997 which would have been Andrew's 34th birthday.

Sections of this page: 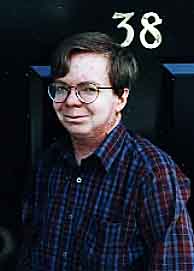 Andrew Gould was born in Salford, England on January 17th, 1963.

Andrew suffered from a rare genetic skin disease, dystrophic epidermolysis bullosa, which causes the skin to blister and scar in response to minor injuries. The skin disease limited his mobility as he grew older, but he was still able to go out and enjoy himself as a child if properly bandaged up.

His family moved to Syracuse, New York, USA in September 1969 when Andrew was six. He started going to the neighbourhood school and graduated from Fayetteville-Manlius High School in 1980. He went on to the local university and received his B.A. from Syracuse University in 1984. He then went on to law school at Syracuse University and graduated with honours in 1986. One of his major achievements at law school was the production of a law school year book. Unfortunately his skin disease made it impossible for Andrew to practice law in Syracuse and he spent most of the rest of his life at home with his parents and his corgi dog Princess.

Andrew was not idle at home. Andrew was always interested in science fiction and fantasy and his collection of books, magazines, videos and role-playing games grew over the years. But his favourite character was Superman and he collected every Superman comic he could. He was a regular visitor to the local comic shops around Syracuse, and even sometimes made it as far as the comic shops in Montreal and Harrisburg when visiting his brothers.

Andrew was fond of computer technology. He had taken some computer courses as an undergraduate and kept an alumni account on the Syracuse University computers. By mid 1994 he couldn't get around so much any more and had to use an electric wheelchair. He spent more and more time on-line using a little Tandy portable computer and a 2400 baud modem to read the Usenet newsgroups on a four hour dialup, as well as to send email to friends and family. Signature files often urged the reader to watch Babylon 5:

By late 1994 Andrew was already exploring the World Wide Web with Lynx from his UNIX shell account, and laying the ground work for his Superman web page. An early version was up and running in November 1994 as part of "Kal-El's Amazing Homepage" at http://mothra.syr.edu:8000/~ajgould/.

These early web pages, through the first graphically enhanced versions in the summer of 1995, were written "blind" in HTML; Andrew relied on those of us with more sophisticated browsers to tell him whether the web page background colours and gif files were showing up correctly. That October Andrew finally got a '486 computer and was able to start using Netscape from home with a SLIP account.

Princess the corgi died (of old age) in January 1996. Andrew was quite upset but continued to work on his Web page and explore new internet technologies like RealAudio.

He made a visit to Montreal in March, which was one of his last trips out of the Syracuse area.

In June his health began to deteriorate again. His skin disease predisposed him to cancer and he developed a cancer on his arm which didn't respond to out-patient treatment. The cancer made his arm swell up, which progressively interfered with his ability to type. At the beginning of November he was admitted to the University Hospital in Syracuse for further treatment, but only after he stayed up most of the night making sure the data for his web page had been safely transferred to its new home to be maintained by Steven Younis.

He died in hospital on November 25th, 1996. He is survived by his parents and his two older brothers.

Obituary announcement from the local newspaper

Andrew J. Gould, 33, of Fayetteville died Monday at University Hospital after a long illness.
A native of Salford, England, Mr. Gould lived in Fayetteville since 1969. He was a 1984 cum laude graduate of Syracuse University and a 1986 graduate of the SU College of Law.
In 1986, Mr. Gould received the Dean's Outstanding Contribution Award and the Law Student Senate Special Services Award. He was a member of the New York State Bar Association.
Surviving are his parents Dr. Leo and Eileen Gould of Fayetteville; two brothers, Dr. Peter V. of Montreal, Canada, and Dr. John D. Gould of Memphis, Tenn.; and a nephew.
Services and burial will be private. There will be no calling hours.
Contributions may be made to the Research Foundation of the State University of New York, 750 E. Adams St., Syracuse 13210.
Eaton-Tubbs-Schepp Funeral Home has charge of arrangements.

This verse is taken from the book Dune. It was one of Andrew's favourite written pieces:

I must not fear.
Fear is the mind-killer.
Fear is the little-death that brings total obliteration.
I will face my fear.
I will permit it to pass over me and through me.
And when it has gone past I will turn the inner eye to see its path.
Where the fear has gone there will be nothing.
Only I will remain.