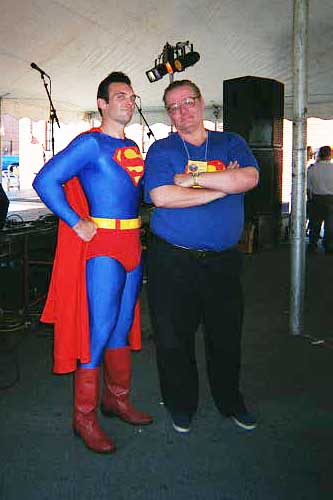 Scott Cranford was chosen as the official Town Superman for the Metropolis Illinois 2000 Superman Festival.

The Superman Homepage would like to thank Scott for agreeing to do this interview!

This interview is Copyright © 2000 by Steven Younis. It is not to be reproduced in part or as a whole without the express permission of the author.

Q: Can you please tell us a little about yourself and what you do for a living?

A: For the last ten years I have been working on a Universe of 25 new SuperHeroes. I have made my living working through the Screen Actors Guild as a Stand-In, an Extra and an Actor. I like working on big action movies and superhero productions. Down-time on sets allows me to get my own artwork and stories done for my company Heroic World.

Q: When and How did you get to be chosen as the Official Town Superman for the Metropolis 2000 Festival?

A: I heard Jim Hambrick (Owner of the Superman Museum) announce that they couldn't find a Superman for the 2000 Celebration. I send out my stuff for any superhero production because I am a fan of the genre and am interested in a career in that field. I never expected to get it.

Q: How did you react when you were told you had been chosen as the Official Town Superman for the Festival?

A: I was happy, I felt like a lot of hard work was starting to pay off.

Q: What was the highlight of this year's Superman Festival for you?

A: I was in between Noel Neill and Margot Kidder in the Superman suit at the autograph session, I got a chance to get to know both of them. Mike Carlin, who I'd met while working on Batman and Robin was there and it was good to see him again. My last night in Metropolis, at the George Awards, I received a standing ovation and a Superman of Metropolis Award, but seeing thousands of kids excited to see Superman is the greatest.

Q: Can you tell us about anything funny that happened to you while portraying Superman at the Festival?

A: During the Superman Drama an explosion was supposed to go off at the bank and I was to change to Superman. It didn't go off, Nathan Gower, who played Jimmy Olsen and I had to fill in a lot of dead air till it finally went off.

Q: Had you ever been to Metropolis Illinois before? What did you think of the place when you first arrived there?

A: No, but I had always wanted to. It reminded me of the small town I grew up in, Rocky Hill, Connecticut. I was very comfortable there.

A: I would have to say Batman, I have a lot of his comics and memorabilia but my Superman collection is growing fast.

Q: When and how did you first become a Superman fan?

A; My first introduction to Superman was comic books and the Superfriends TV show, I remember thinking he was cool, but not as much as some of the other heroes, but after seeing the first Superman Movie I got the whole story, I was hooked.

Q: What comics do you personally read?

A: Batman, Superman, Spiderman, Aquaman, I like all the classic DC and Marvel Superheroes. I like to read what's hot. I flip through everything to see what's going on. I like Elseworlds and event issues.

Q: What version of Superman is your personal favorite (Comics, Movie, TV)?

A: Comics? Too hard to say. Movies, the 1st Superman movie with Christopher Reeve. TV, The 1st season of The Adventures of Superman with George Reeves.

Q: Which did you think of when you portrayed Superman?

A: I thought all of the portrayals of Superman have been great, I tried to use something from all of them and add what I have learned from researching comic books for so many years.

Q: What are you working on at the moment? What plans do you have for the immediate future?

A: When I was given the part of Superman, I made a promise to put out the greatest Superhero Entertainment ever. I am working at fulfilling that promise.

Q: Will you be working on any future/up-coming Superman-related projects?

A: I just returned from West Chicago where I gave a speech as Superman on Crime Prevention at the National Night-Out Against Crime. It was great. Soon at HeroicWorld.Com you will be able to download my video submission for a contest sponsored by Wizard magazine and Kevin Smith. I play Clark Kent/Superman. It was included in my package to Metropolis to get the part of Superman. There are a few things I can't discuss and there are big plans for next year's celebration.

Q: Who would you like to see play Superman on the big screen in another Superman movie?

A: I thought the formula for Superman: The Movie worked, pack it with respected actors and cast an unknown as Superman/Clark Kent.

A: I don't take enough time to relax.

A: Your determination can control your destiny. Look for the best in everything and everybody. Never lose faith in the pursuit of righteousness.

A: Adam West. He'd have a lot of great stories.

A: I'd invest it in HeroicWorld, soon to be the Biggest name in Superhero Entertainment!

A: Thanks Steve for allowing me to be on such a great site!