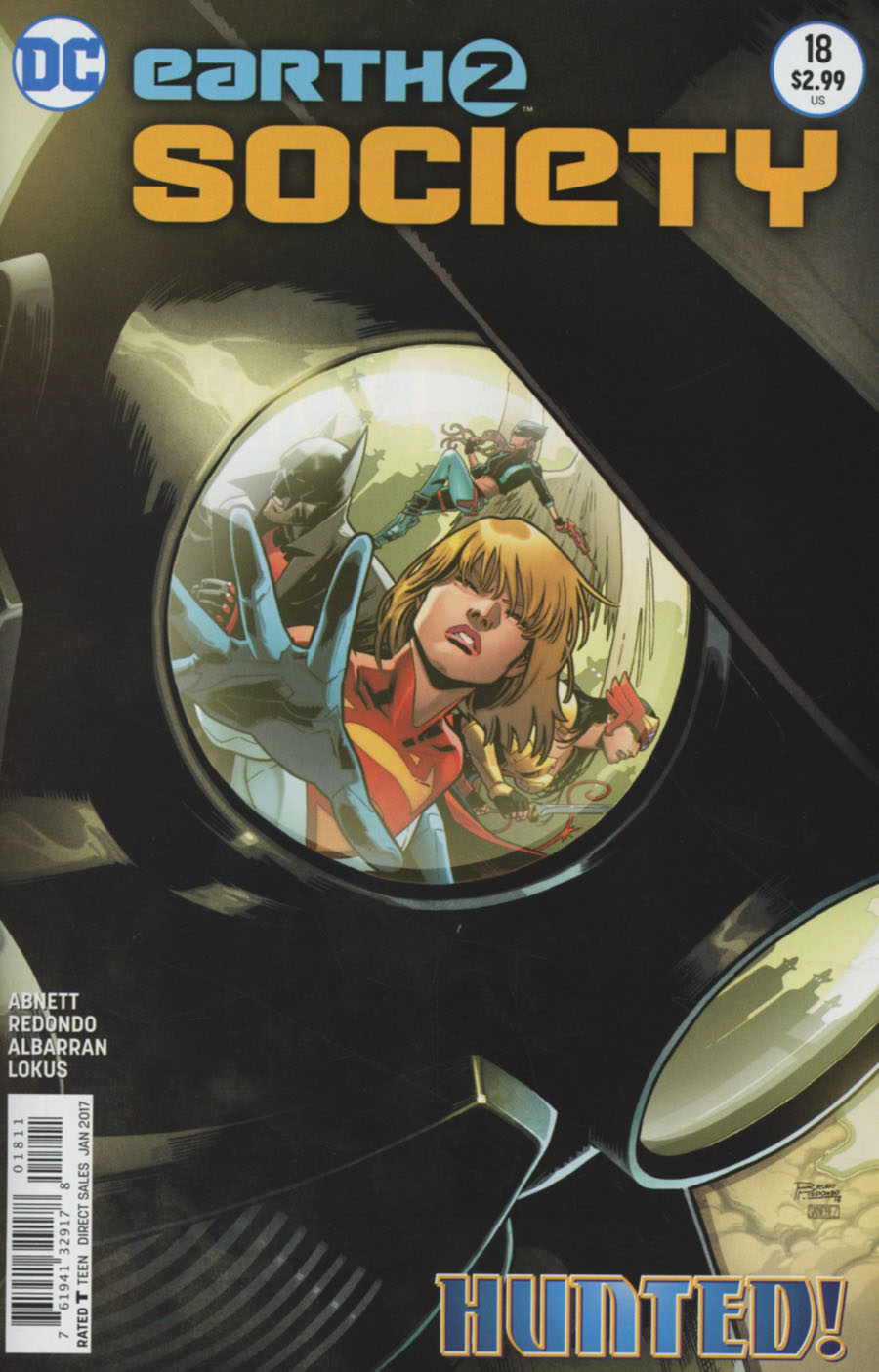 Earth 2: Society #18
Cover date: January 2017
"The Final Fate of Earth 2" - Part Two: "After the End"
Writer: Dan Abnett
Penciller: Bruno Redondo
Inker: Angel Hernandez
Earth 2's heroes are wandering in limbo fighting Sandmen while the world reconstructs itself. Val-Zod notes that there are subtle changes to himself and the others. He, Power Girl and Red Tornado X-ray their surroundings to find that they are in an incomplete version of old Metropolis. Meanwhile, as Sandmen try cleanse this reality, Fury destroys a barrier that reveals a room that has been fully formed. The heroes, however, have no time to investigate it. Everything has gone dark, and Metropolis is an entire city as it was before the war with Apokolips. Batman, Huntress and John Grayson are in the middle of a crowded street when Commander Steel urges them to come with him. Their survival somehow depends on this. Why? Is there more to this rebuilt Metropolis than meets the eye? 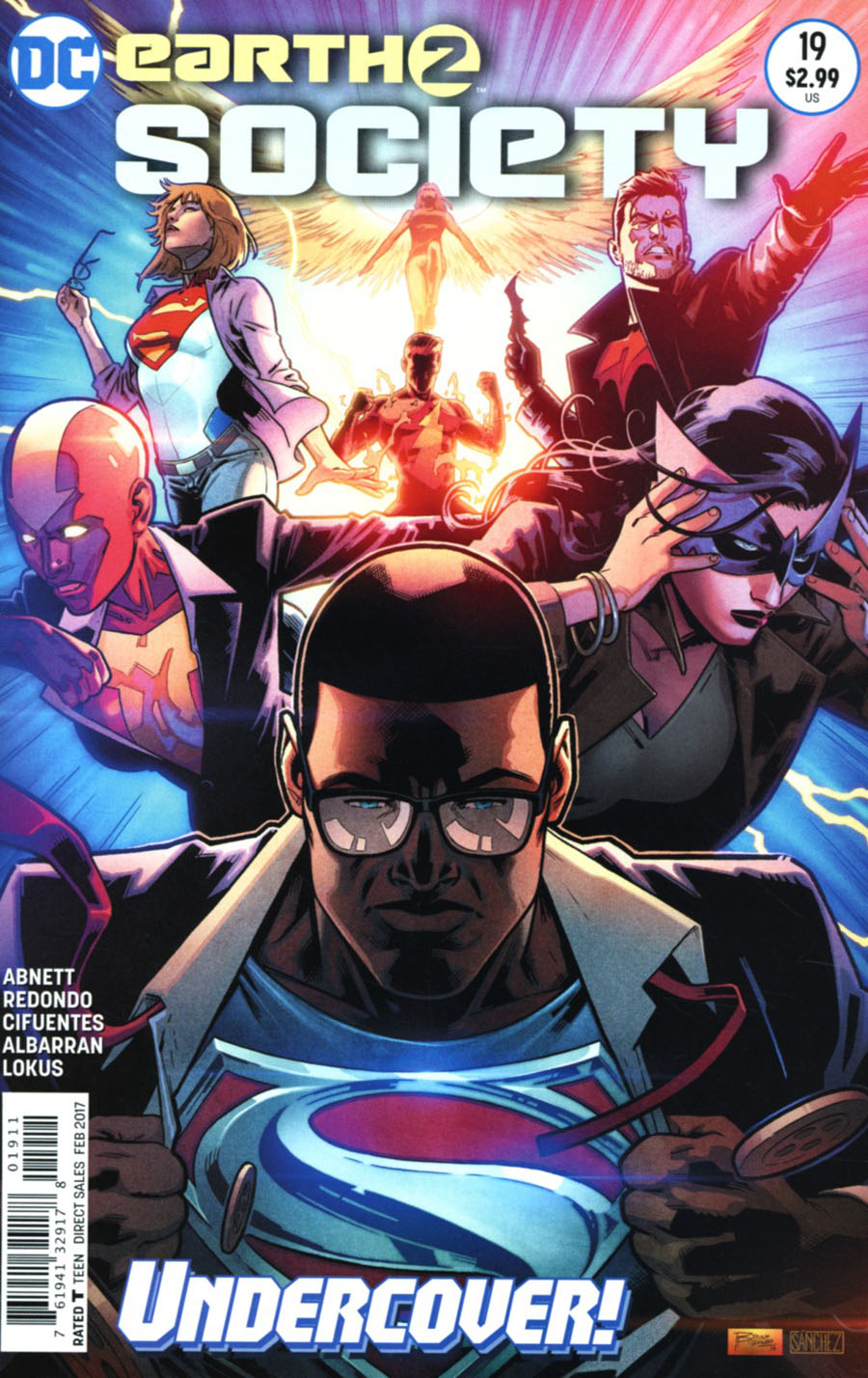 Earth 2: Society #19
Cover date: February 2017
"The Final Fate of Earth 2" - Part Three: "Metropolis Underground"
Writer: Dan Abnett
Penciller: Bruno Redondo
Inker: Juan Albarran and Vicente Cifuentes
Huntress, Batman and Boy Wonder (John Grayson's new codename for now) are underground with Sergeant Steel, who is part of a movement to bring down Central Control, an Anti-Wonder government that sent the Sandmen after the various heroes when the world rebooted in the previous issue. The Dark Knight's group is being shielded from Central Control's scans until John senses that they about to be found. Steel misunderstands this, believing Batman's group to be spies. Conflict ensues, and as his back is facing the reader, the Caped Crusader is shot by Sergeant Steel. Whether the Batman is dead or alive remains unknown. However, Huntress and Boy Wonder will fight for him. Power Girl, Hawkgirl, Fury, Red Tornado, the Flash and Superman are in civilian disguises observing Metropolis until an army of Wesley Dodds' Sandmen attack them. The director of Central Control, who is really the Ultra-Humanite, doesn't want any Wonders to survive on his new wold because he arrived first. How will Earth 2's heroes make it out of this new peril in one piece? 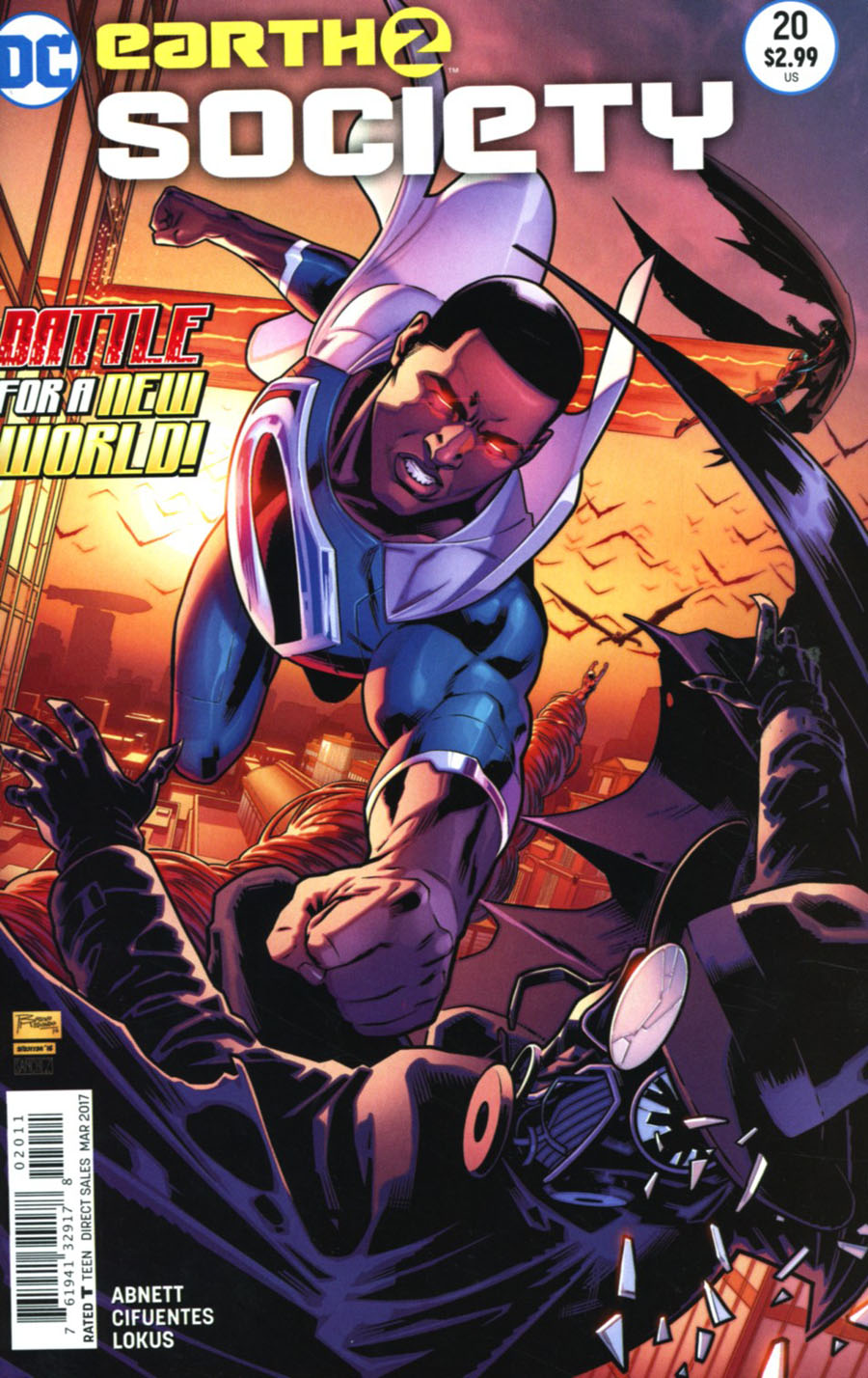 Earth 2: Society #20
Cover date: March 2017
"The Final Fate of Earth 2" - Part Four: "Ultra-Humanity"
Writer: Dan Abnett
Penciller: Vicente Cifuentes
Inker: Vicente Cifuentes
Power Girl, Hawkgirl, Fury, Red Tornado, the Flash and Superman are fighting all of the Ultra-Humanite's Sandmen in the heart of Metropolis. This leaves the Huntress, Boy Wonder and Batman to prove they are on Sergeant Steel's side by infiltrating Central Control. The Sandmen are willing to endanger innocent lives who fear the superheroes while the Wonders they combat try to protect them. The army of Sandmen is being depleted permitting the Ultra-Humanite to unleash his ultimate weapon, Alan Scott the Green Lantern. 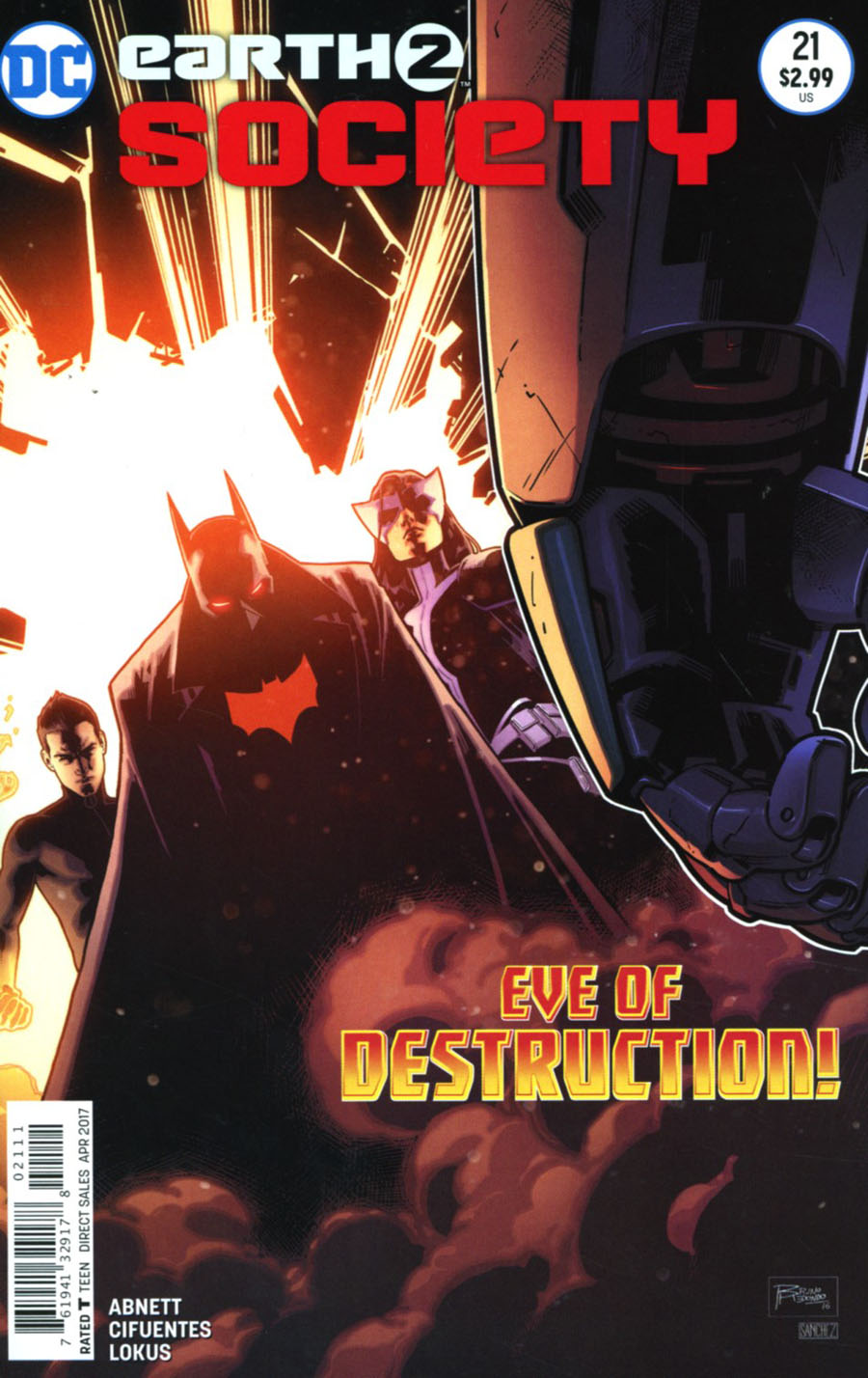 Earth 2: Society #21
Cover date: April 2017
"The Final Fate of Earth 2" - Part Five: "Weaponized"
Writer: Dan Abnett
Penciller: Vicente Cifuentes
Inker: Vicente Cifuentes
As Power Girl, Hawkgirl, Fury, Red Tornado, the Flash and Superman battle the Green Lantern while trying to break the Ultra-Humanite's control of him, Huntress, Boy Wonder and Batman infiltrate the villain's Central Control. Things do not go well for the heroic Wonders in Metropolis. Alan Scott has outmaneuvered them in every way. It isn't until Green Lantern nearly crushes Power Girl to death that the Ultra-Humanite's brainwashing is undone. Batman's group had distracted him, breaking his concentration. Green Lantern kills the Ultra-Humanite. Victory has come to Earth 2's superheroes, but there is a price. Batman is dead. His neck was broken by the Ultra-Humanite. How will Huntress, Boy Wonder and the rest of the Wonders of the newly restarted Earth 2 continue without their comrade, friend and father? 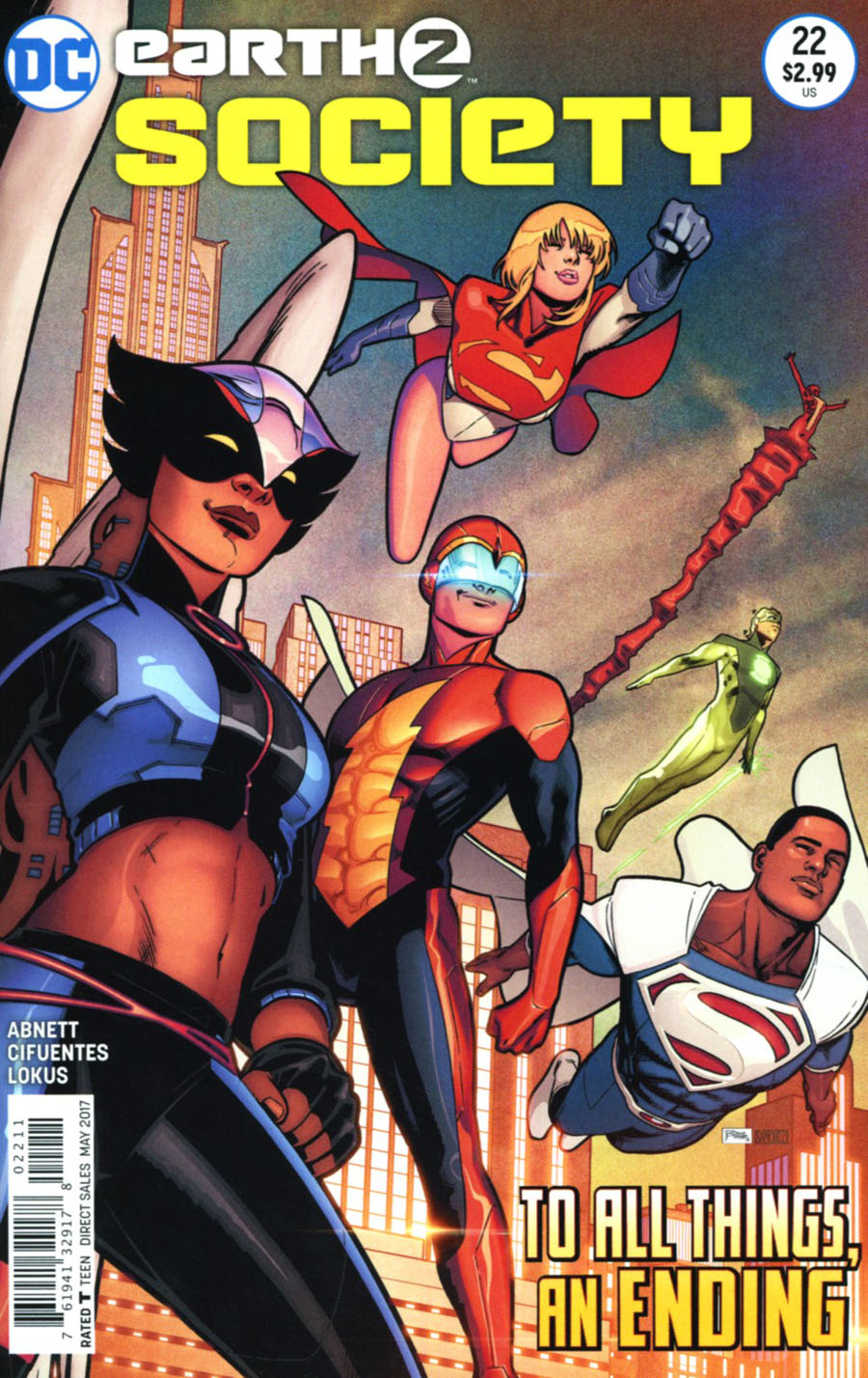 Earth 2: Society #22
Cover date: May 2017
"Life After Death"
Writer: Dan Abnett
Penciller: Vicente Cifuentes
Inker: Vicente Cifuentes
With the Ultra-Humanite defeated, Earth 2 has a new lease on life. The superheroes, or Wonders as they are called, are no longer feared. Huntress is the new Batman, while Dick Grayson has become Oracle. Good fights evil, and humanity goes about its normal life. Every wonder from Fury to Superman has every intension of making the most of their world's rebirth by making sure nothing ever threatens it ever again.

Here is a listing of the Earth 2: Society title from its introduction with issue #1 in 2015.