Welcome to the Superman Homepage Caption Contest! The rules are simple. Just click on the Comments link below to leave a caption for the following image.

Leave as many captions as you can think of, but keep it family friendly. Captions deemed to be outside our Caption Contest Guidelines will be deleted at our discretion.

In the end, there can be only one winner. The winner will be decided by Steve Younis, your Caption Contest compere.

The winner will be announced when the next new Caption Contest is posted. While there’s no physical prize, the winner will gain the praise and admiration of their fellow Superman fans.

Speaking of which, the winner of the previous Caption Contest was:

Angelus0018:
I never thought it was a big deal, even Batman was doing it, then one day he shows up and his underwear is on the inside so… 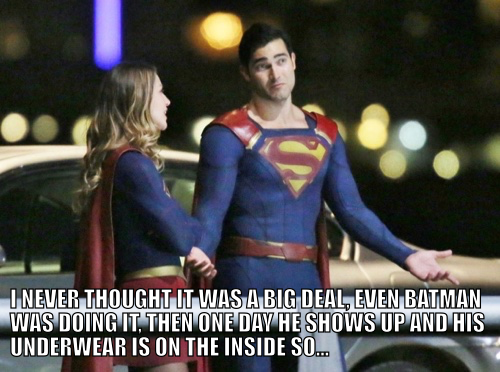 Check out the Caption Contest Archives to see the list of runners-up.

Note: You need to be a member of the Superman Homepage to leave a comment, but it’s free, so sign up and join the fun!

I guess I won’t have to renounce my citizenship now.

“Okay, ma’am. I have X-Ray vision, so I’ll make you a deal. I won’t tell the world you’re wearing depends if you don’t tell them I’m swearing in to the presidency on a trade paperback of Civil War II. High five if you agree.”

“So anyway, I caught him stealing forty cakes. Forty. And that’s terrible. All right, baby. Time to SUPER PRESIDENT THIS THING. Oath me up, Ginsburg.”

I solemnly swear I am up to no good…

Shows picture to everyone:

Yeah, you bet your sweet butt you’d vote for that – trunks and all! 😀

Even Superman realizes that he must himself become president to defeat the evil Trump and Clinton.

Wow, another anti-trunks “joke” wins the caption… Very self hating on behalf of Superman fans, in my opinion. Sad.

This week’s pic: Superman’s face looks mega intense over being sworn in for some reason…. He must really love his country.

Superman: “Reagan, when did you get an earring?”

…So help me Rao

Superman: I swear that superhero trunks shall return!

Trumpkins wept as they realized their guns were truly useless now.

So then she said, “Let’s high five and you’re president”

I swear from now on I will only fight monsters and bad guys in abandoned or uninhabited areas of the city, or after business hours.

I swear I will not kill anyone… directly.

What a great book! Love Moses’ back story!

Haha! This is my favorite so far…

…thus, by MASSIVE write-in vote, the American people chose a President known for getting the better of both follicly-challenged millionaires who like to put their names on everything, AND beings who interact with other cultures yet have a penchant for causing computer problems.

I forgot to add “and who ALWAYS come back no matter what” at the end…I do want to be balanced, after all.

To the best of my ability I will fight for truth, justice and the American way, so help me God.

Truth be told, joking aside, THIS ^^ is what Superman would actually say! 😀

judge: pardon my timing, but i just have to ask…Hanes or Fruit of the Loom?”

superman: i love your spit curl!

superman: ya know it wouldn’t kill you to smile

superman: can you see anything in my batcave?

judge: you have a little something on your teeth

A Justice and the American Way.

psst. you have a bat in the cave…

Stronger together. Hey, my family used it first.

(from my dad) Justice: a League of His Own

clark and martha kent’s caricature sketch from the smallville carnival

“Oh… is this a Bible? Last night I discovered that my people worshipped a sun god named Rao, so that’s what I’m into now. Do you mind making accomodations for my new beliefs?”

Thanks for returning my book… I… I feel I must slowly high five you now.

As they renewed their vows, Clarked thought to himself, “Lois never did quite age as I thought”

“You wanna try some of Grannys Peach Tea son?”

Will you stand for truth, justice, and the American way?
I will

What do you mean that Clinton and Trump eloped and nominated me?

Here on behalf of Donald Trump is Superman — Hillary keeps killing all of her competition, but the caped kryptonian is bulletproof. The Man Of Steel’s team up with Teflon Don is a nightmare for america hating scum like Lex Luthor and Hillary Clinton.

Hillary may have had DNC staffer Seth Rich shot 4 times in the back for email leaks, but it will take more than bullets to bring down a Man Of Steel presidency.

I swear to uphold Justice and the American Way. Also Truth, except if Lois asks if she looks fat.

“. . . and I solemnly swear that, after Hillary Clinton / Donald Trump is sworn tomorrow, I will use all of my powers to secretly protect this country and the world from the consequences of her/ his obvious incompetence. ”