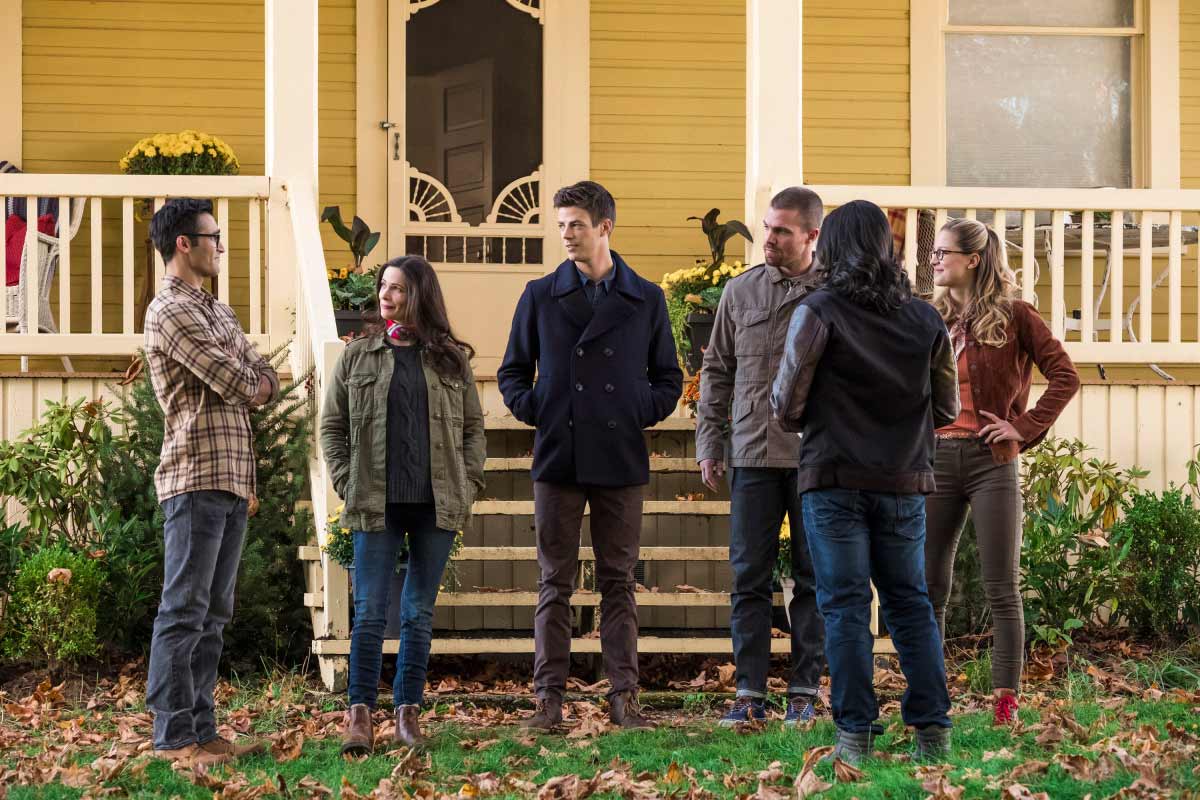 Rating - 5 (out of 5): This crossover is going to be hard to review or rather it is going to be hard to review objectively. For one thing, I have been looking forward to it since they first announced. For another thing, while this episode referenced things going on in the storylines of the three series involved it was pretty much stand alone. Some of the characters beats relied on you knowing things about the history of the people involved (Barry setting up the arrows to shoot Ollie in the back to get friendly revenge for when Ollie did the same thing to him is a good example) but for the most part this episode and the two that are going to follow it exist for one reason.

To cause fans like me to lose their minds.

There were things that happened in this episode that I thought I would never see or never see again. John Wesley Shipp in his '90s Flash costume. The fact that the design of The Monitor is so accurate to the comics is amazing. If you would have asked me a few years ago if I ever thought I would see a live action Monitor after seeing what the Arrowverse was doing and what the Marvel films were able to accomplish I would have still said there was no way it would never happen. Because he's part of this huge storyline that would be impossible to distill in a movie or mini-series there's no way they would put him on television and yet there he was at the beginning and end of this episode and I honestly can't express how happy that made me.

And that's the strength of this episode. It made me happy. I haven't been this excited for a live action comic book adaptation since the first Avengers film in 2012. The sheer number of heroes involved in this crossover not to mention the heroes they chose to involve in this crossover is insane and the fact that they stuck the landing with this first part made me not only squeal with delight but also breathe a huge sigh of relief because it didn't let me down at all.

The story itself is pretty simple; The Monitor gives Dr. John Deegan (who is a bit on the mad side of being a scientist) a book that allows him to re-write reality. His first move is to switch Barry Allen and Oliver Queen. There were some great character moments that came from this switch. The fact that they had to adapt to each other's skill sets was played humorously but there was a lot of heart to their interactions with each other and their supporting casts. Grant Gustin looked like he was having a ball as Green Arrow and this A plot was very satisfying. The fact that they introduced a live action version of Amazo will never not be cool. The additional fact that he was a legitimate threat was even better.

But, come on...the reason I was so excited for this crossover and this episode is the return of Tyler Hoechlin as Clark Kent and Superman and the introduction of this world's Lois Lane as played by Elizabeth Tulloch.

And I was not disappointed.

The version of Clark and Superman that was developed for this universe as played by Tyler Hoechlin is closer to the Superman that exists in my head than any other live action or animated version of the character that has come before. The first two episodes of the second season of SUPERGIRL contained so many things I look for in a Superman that I could hardly believe it. Like everything else in this episode Hoechlin did not disappoint. The back and forth with Lois felt right. The conversation with Kara about her recent resignation from the DEO likewise felt right and while he was giving advice he wasn't preaching. The moment he told Barry to call him Clark was everything I want to see in Superman; confident but not arrogant. The shirt rip made me happy and his part in the battle with Amazo was better than the fight with Steppenwolf in JUSTICE LEAGUE.

And I nearly lost my freaking mind when they played the theme to SMALLVILLE. I did not expect it, but I was so excited that it happened.

Elizabeth Tulloch's Lois Lane was a joy to watch. I liked how she got along with Clark. I like that she was a feisty reporter that wanted to write the story she wanted to write but still had the conversation with Clark about writing it. She wasn't dismissive. She wasn't petty. She wasn't two dimensional. Like Hoechlin's Superman this Lois Lane feels familiar and the fact that she was ready to smack Ollie and Barry with a hammer made me smile. I'm looking forward to seeing more of her as the crossover continues.

Part One of this crossover was everything I wanted it to be. We have The Monitor handing out a book that controls reality, red skies and jumps between different realities. There is a part of me that thinks that The Monitor is doing all of this to test the heroes involved because of a larger Crisis down the road but we'll see how that goes. Right now I am too high on the excitement of this episode to really think too closely about where the story is going.

It is so nice to be this excited for what comes next in this story.