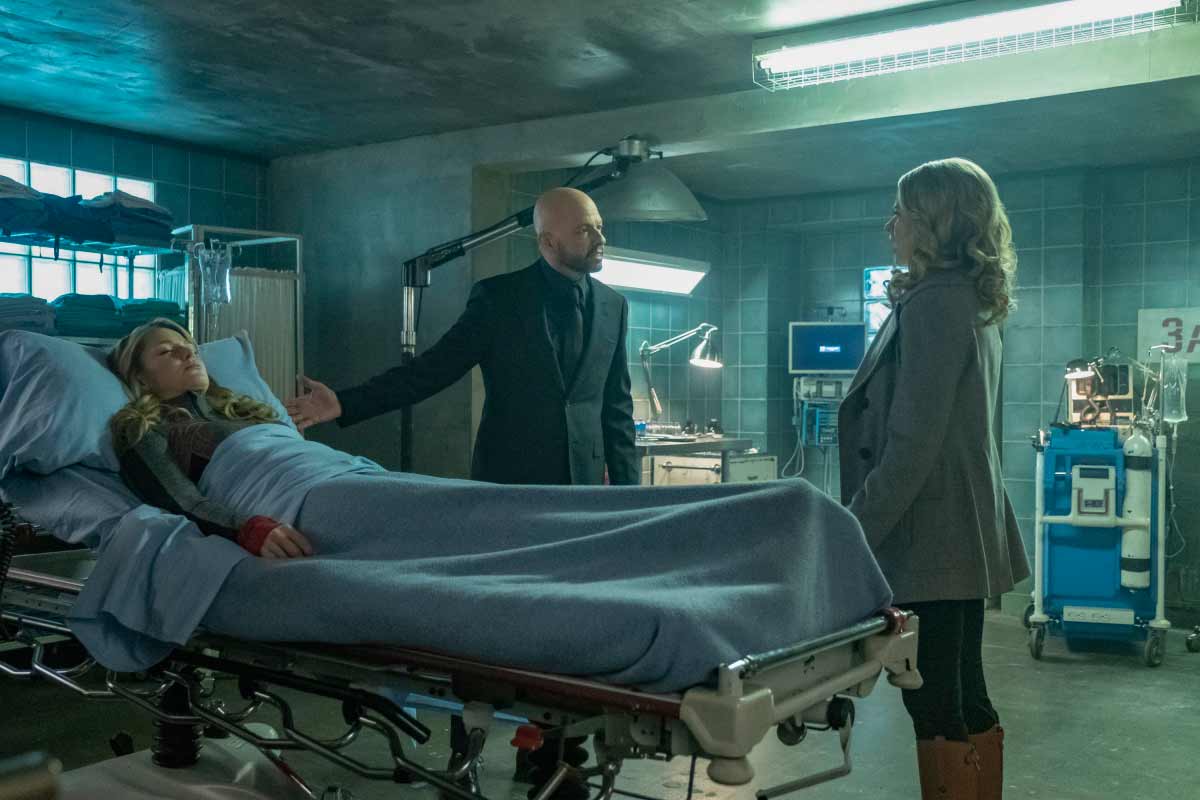 Rating - 5 (out of 5): After I finished last week's episode, I was curious if I thought it was the best episode of the season because it was a big deal, event episode with Lex Luthor or if it was legitimately the best episode because it was actually a good episode. It's easy to get blinded by a huge event and I didn't want to say it was the best just because of that event. That's unfair to the rest of the season.

Well, it turns out I was wrong.

Last week's episode wasn't the best of the season.

This week's episode was the best of the season.

And it is because of Lex Luthor's involvement, but not just because he's in the episode. I've been on record as liking the direction this season has taken and that the show runners have done, to my mind, a great job of exploring some pretty heavy topics, and taking a stand on those topics.

At the same time there was something.

The missing piece...the thing that I couldn't put my finger on...the element that needed to be there was the fact that, at the end of the day, this is a comic book show. Specifically, this is a "Super" related comic book show, and while I want them to talk about the issues they've been talking about, up until a few weeks ago that's nearly all they were doing. The show was good,, but was missing the slightly over-the-top concepts and tropes that go into telling stories about a survivor from Krypton. We were given glimpses of these tropes (Manchester and crew at the Fortress) and the crossover episodes were full of them, but they seemed to be MIA, for the most part.

Those tropes came roaring back the moment Lex stepped out of the helicopter and armored up.

Was this another Iron Man type scene? Yes, but I didn't care. I got to see Lex in power armor.

Not in traditional animation.

Not on the comic page.

Not in a video game.

And that was just in the first five minutes.

After a very clunky effects shot of Lex holding up the Daily Planet globe (the only real misstep of the episode, but I appreciated the effort) the episode just got better and better. I've gotten past trying to explain why I like something by comparing it to something I don't like because that's reductive. Plus, it seems like I'm picking at or challenging people that like those takes, which just leads to a day arguing on social media and getting absolutely nothing done. So, I'm not going to do that.

What I am going to do is discuss what I want to see in a story with Lex Luthor.

Lex, when done right, is one of the best villains in comic books in specific and fiction in general. Most of the Lex Luthors we've been given over the decades have been nuanced and fascinating characters. Whether he's the Silver and Bronze Age comic book Lex (who went evil for more reasons than he went bald, by the way) or the corporate raider/underworld boss Lex or President Lex or Smallville Lex there's something compelling about him that makes him stand out above the evil crowd.

He's smart. He's arrogant. He thinks he's better than everyone else. He thinks he's right. He's vindictive. He's a narcissist. He's a sociopath. He blames his own shortcomings on others. He's the product of a terrible childhood.

He's all of that, and more, and the writers of this episode managed to show us that in a series of flashbacks that had me riveted to my seat for the entire episode.

The court room scene was fantastic. The previews showed us Lex blaming it all on Superman, but killing the judge, the jury, and the prosecutors was so over-the-top that it was genius. Having the warden and everyone at the prison in his pocket was just as over-the-top, but I didn't care because it felt so right. Seeing how this Lex met Eve and how he put her into play is probably a serious retcon, because I don't think this sort of thing was in the show runners' minds when they brought her in, but the way they explained everything made the retcon work.

Along with all of that we finally got to see more of the Russian Supergirl and get her backstory. I was honestly convinced that she was some sort of temporal clone of Kara created when she popped back in time at the end of Season 3, but having her be a product of Black Kryptonite works just as well. The writers also took the time to make her a very sympathetic character and I loved the father/daughter relationship they developed between her and Lex. You can see where she's trying to be a good person and the fact that Kara is a good person by nature, but the nurturing of Lex twisted all of that. It was played just right. Not too much but not too subtle either.

The Linda Lee/her wearing a wig thing was just the ice cream next to the cake. You didn't need it, but it made the experience better.

I would have written that it was the icing on the cake, but I'm of the opinion that cake without icing is rather boring.

The revelation that Lex is somewhat behind the alien unrest that we've been dealing with this season may seem like a cheat, but, to me, I don't think the writers were saying that Lex caused the unrest. They were saying that he stoked the fires, so Ben Lockwood is still a compelling bad guy and the Children of Liberty are still a bunch of racists, but they're doing what they are doing of their own free will. Lex isn't controlling them. He simply pushed things in a certain direction for his own ends, which is very Lex Luthor.

When you add that to how awesome the Russian Supergirl's costume looks, the almost touching scene with Otis and the kid, and the fact the writers once again made a flashback episode so compelling that you didn't care it was a flashback episode, you get the best episode of the season.

And, thanks to the writers and especially to Jon Cryer, we got one of the best versions of Lex Luthor we've seen outside of the comics.