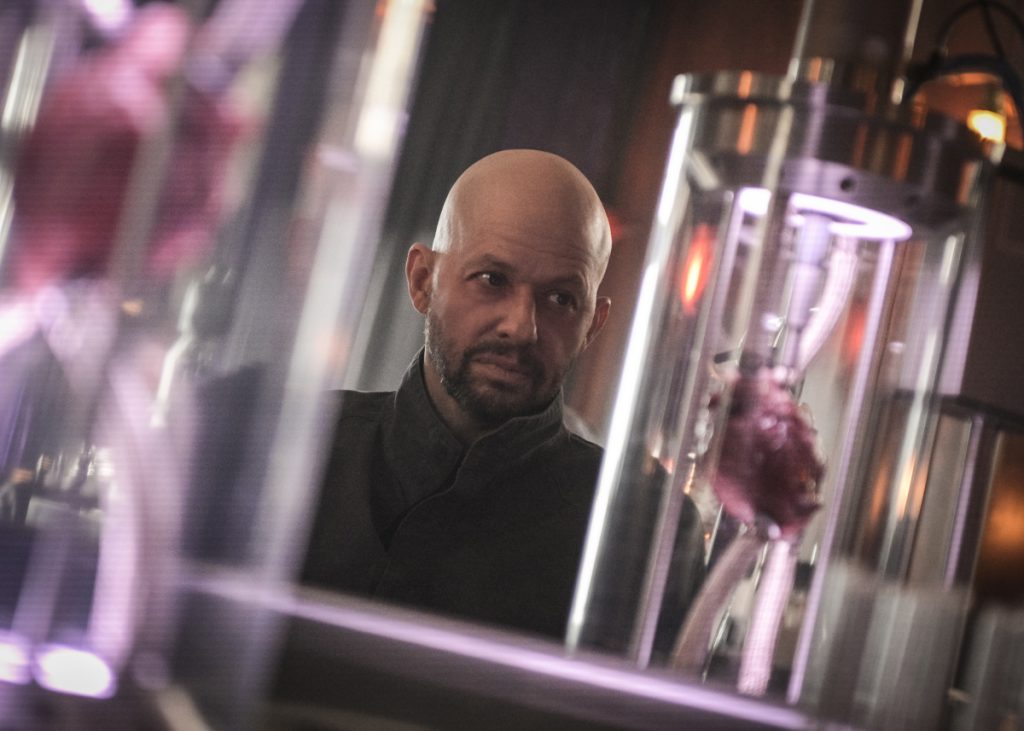 Rating - 5 (out of 5): I was excited when it was announced that Lex Luthor was going to be on this season of Supergirl. It seemed like a good move for the show, not only because there is a fair bit of history (some of it strange and some of it silly) between Supergirl and Lex Luthor, but also because Lena is such a strong part of the cast. It's a stunt, to be sure, but it's a stunt you can do something with because you get to have Lex take on the cousin of his arch-enemy against the backdrop of the complicated family dynamics of the Luthors.

Then it was announced that Jon Cryer was going to be playing Lex. This was also a bit of a stunt because Cryer had previously played Lenny Luthor in the much-maligned Superman IV: The Quest For Peace. Superman IV is one of the many punching bags in Superman fandom. This is why I wasn't surprised at the jokes and general cries of, "WHHAAAAT?" that popped up when it was announced that Cryer was going to be playing Lex Luthor. "Lenny as Lex? How does that work?"

In the interest of full disclosure, I am going to reveal that I am a fan of Superman IV: The Quest For Peace. The film has many flaws and even if you put the thirty-four minutes of footage that they cut out back into the movie it would still be extremely flawed. Lenny is seen as one of those flaws. He is very dated with his eighties slang and what the film makers thought was eighties dress and he's silly. I'm not saying that Lenny was one of my favorite parts of the film, but I also didn't think he was any sillier as a character than Otis was in the first two movies. So, I didn't laugh at the idea of Lenny playing Lex because I didn't think Lenny was a terrible character.

More than that Jon Cryer is a seriously good actor. He is probably best known for playing Duckie in Pretty in Pink and Alan Parker on Two and a Half Men, but he's racked up a seriously respectable resume as an actor besides those two roles. I have a lot of affection for him in the movies Hiding Out and Morgan Stewart's Coming Home but he's been in dozens of movies and television series in his thirty-plus year career. In addition to Cryer's acting chops, the showrunners have rarely made a blunder in casting a role. If they tapped Jon Cryer then I knew they had something special in store for Lex.

And it turns out I was right. Their take on Lex was a fantastic meld of the various iterations of the characters. You could see flashes of the Geoff Johns and Grant Morrison comic book Lex and the Gene Hackman Lex and even the Michael Rosenbaum Lex, but at the end of the day Cryer made the role his own. Lex was everything he needed to be in this episode; sympathetic, manipulative, and evil. You understood his motivation, but the writers never lost sight of the fact that Lex is a villain. Cryer played all of those elements masterfully and the dynamic between his Lex and Lena made the episode even better. Their scenes together were a roller coaster ride of emotions, especially when Lex told Lena about her mother. You knew that Lex was manipulating her, and you knew she probably should have had her guard up, but family is complicated, so that final betrayal that happened at the end of the episode felt organic and earned. I also liked that a bunch of seemingly separate plot points were brought together in a smooth and organic way.

It was that final scene that really made this episode special when it came to Lex. Otis coming back was a surprise, but Eve's heel turn was a master stroke of storytelling. I've been happy that the writers have made Eve more of a character over the course of this season. I thought it was cute that they brought her in as Cat's and then James' assistant, but her working with Lena made her a real character and not just a glorified Easter egg. While it is a serious retcon that she's been in Lex's service this entire time (I seriously doubt that they had this in mind when they brought her in at the beginning of season two) it's a retcon that works.

And using Mozart's Eine Kleine Nachtmusick at the end when Lex makes his escape was brilliant in every sense of the word. I lit up when it began playing. In my opinion it was the best Easter egg of the episode.

What made this episode even better was that the sub-plots were never a distraction to the main plot. In fact, they made the episode feel more epic. J'onn's battles with Manchester Black came to a temporary conclusion this week with J'onn seemingly killing Black, but I have a feeling that Black is hiding out in J'onn's mind. The zombie Kara and Alex scene was very well done and I continue to like the evolution of J'onn as character this season. James' sister may have been a minor part of the episode, but I liked her dynamic with Alex, and it was nice to get some background on this version of Jimmy Olsen. The Brainy/Nia relationship took a step forward as well and I'm hopeful that things can work out for them.

There was one thing about this episode that gave me pause. While I was watching the story unfold, I kept thinking that this was the best episode of the season. After the show was over, I started thinking if it was fair to think that. Bringing Lex in is a bit of a stunt. That's not a bad thing. Stunts are fun, and when done right they can bring a lot of energy to the show, which was certainly the case here, but is it fair to call this one of the best episodes when it doesn't tie into the themes that the show has been exploring this season? I'm not sure there is an answer to that question. I like the direction the show has been taking, but I also liked that a lot of the heavier themes were put to the side this week and we got a more traditional story.

It's weird. Maybe the show needed this breather before getting back into the heavier themes of the season. We'll see how that works out. For the moment I am glad that this episode was everything I wanted it to be and more and that next week we'll not only get more of that but a resolution to the Russian Supergirl sub-plot.