Season 4 - Episode 13: "What's So Funny About Truth, Justice, and the American Way?" 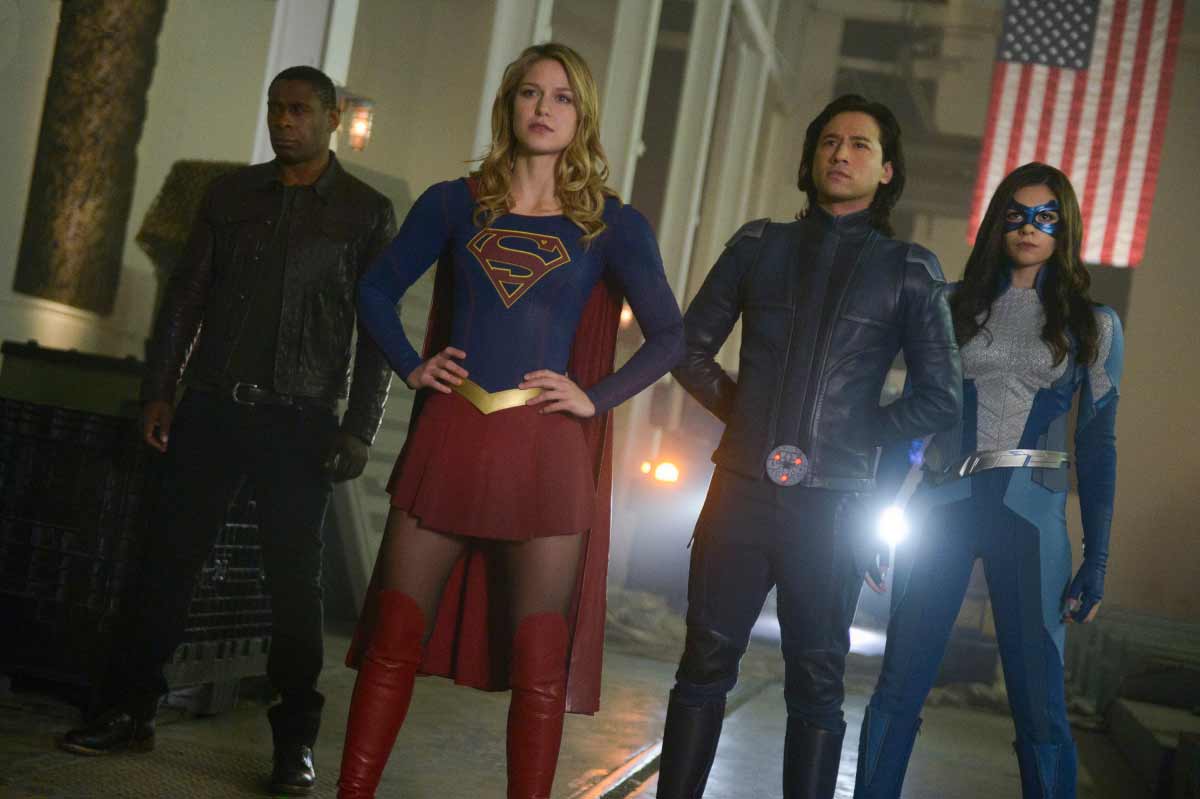 Rating - 4 (out of 5): Before I get into the review, I wanted to mention that, unless I am completely wrong, the guy playing Cougar (the bearded man that met Ben Lockwood in the bar and then got beaten with an Agent Liberty mask at the end of the episode) is the same guy that played Andrew Conners in "Precipice", a second season episode of SMALLVILLE. Andrew was one of the three guys that were threatening to assault Lana and then got thrown into a police car by Clark. I'm not 100% sure of this but if it is the same actor then two guys from SMALLVILLE were in two scenes together on another Super-related show. I think this sort of thing is cool, but to be fair it doesn't take a whole lot to amuse me.

This was a strong episode of SUPERGIRL and I liked it quite a bit. The main strike it has against it is that the episode was titled, "What's So Funny About Truth, Justice, And The American Way".

For those of you that may not be aware, that was also the title of the story that appeared in ACTION COMICS #775, which was published back in January 2001 and was written by Joe Kelly with art by Doug Mahnke and Lee Bermejo. In that comic, Superman is confronted not only by a new super team called The Elite but also a crisis of confidence and morality. The Elite (made up of Manchester Black, The Hat, Menagerie and Coldcast) are a take no prisoners style group and essentially call Superman out for his seemingly outdated methods and outlook. The story made a point and that point was summed up by Superman's final bit of dialogue to Manchester Black. "Dreams save us. Dreams lift us up and transform us. And on my soul, I swear... until my dream of a world where dignity, honor and justice becomes the reality we all share - I'll never stop fighting."

"What's So Funny..." is one of those Superman stories that constantly make the top of whatever TOP (Fill in the number) SUPERMAN STORIES OF ALL TIME lists that make the rounds when comic book sites want to generate some ad revenue. It was even adapted into an animated movie called SUPERMAN VS THE ELITE. With that sort of pedigree you would think that if you titled an episode of SUPERGIRL with the name of one of the best rated Superman stories of all time that you would...you know...in some way adapt it.

And to my mind the writers and producers completely dropped the ball in that regard.

Again, this was a great episode. I liked it much better than the last few installments. It moved the story along, threw us some great curve balls and ramped up the drama. Every member of the main cast had their stories advanced in a meaningful way and the various plots threads that have been going on their own started to get weaved together.

Nia progressed in her training as a hero. Brainy was dealt a blow to his ego. J'onn began to realize that he might need to pick up the sword again. Lena began working in the DEO. James okayed a story that might make Lena look bad. Ben Lockwood not only became a part of the current administration but re-asserted his authority with the Sons of Liberty. The President showed what a bad guy he really was. Alex started doing what she felt was right as opposed to following protocol. The Elite, led by Manchester Black, were introduced. Finally, Supergirl stood her ground with the President, fought against the Elite, and destroyed a satellite she thought was morally wrong.

Oh, and the President is doing things behind Col. Haley's back and she didn't seem happy about that.

When you combine all of that with the fun banter between Kelex and Brainy then this was an amazing episode.

That should have had another name.

Nothing that happened during the course of the forty-two or so minutes, outside of maybe the introduction of the Elite, had anything to do with ACTION COMICS #775. You could make the argument that naming this episode "What's So Funny..." was just a nod to the first appearance of The Elite as a team and you'd be right. To me, that is the title of an episode where Supergirl proves to everyone that her philosophy is the right one. It's not the first appearance of The Elite. It's the one where she takes them down and proves to the President and to Col. Haley and to Lena that her way to the way they should go.

It should have been the title of the season finale.

At the end of the day, though, it was a minor thing. I may have taken up a lot of my review writing about it, but I meant it when I wrote that this was an amazing episode. It put the season back on course and made me excited for the next episode. The show continues to treat the themes and the social commentary with a deft hand and this could end up being the best season yet.