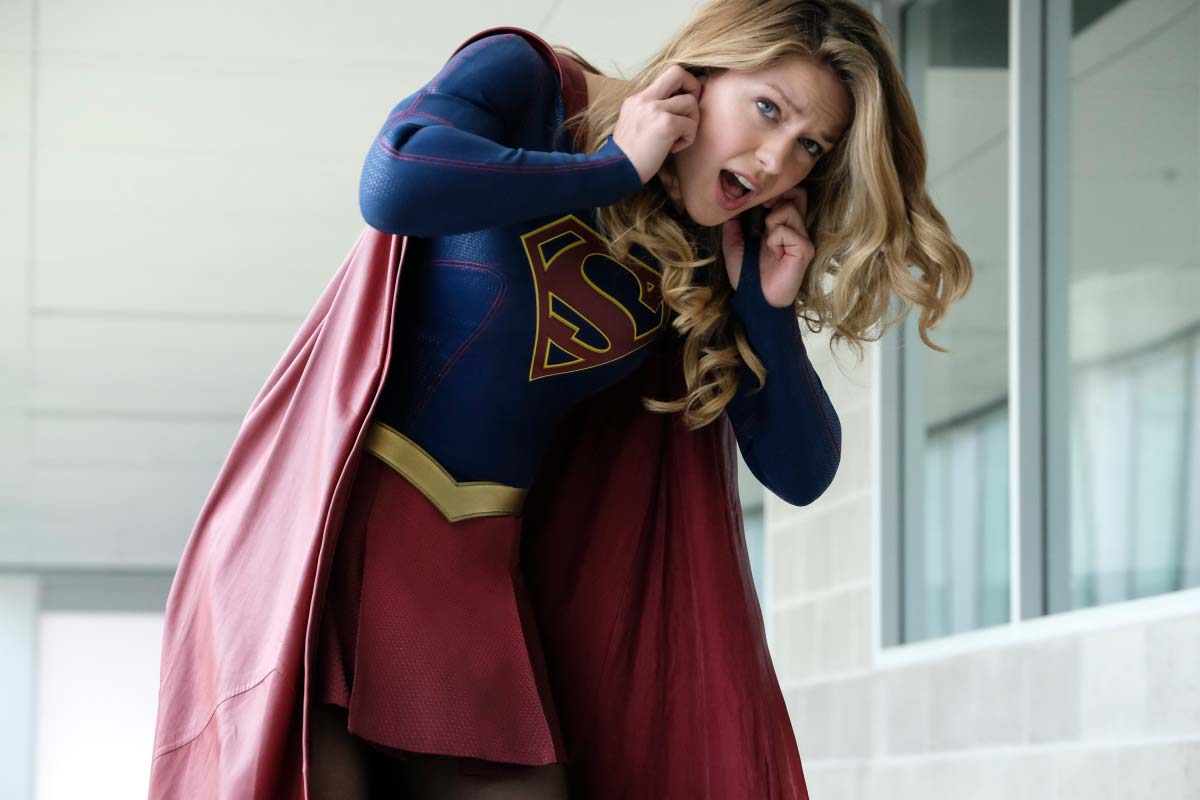 Supergirl is everywhere! Stopping a meteor (and saving a little girl's balloon), catching a thief at a museum and saving a train from falling off a cliff in Kasnia. Finally having "down time" Kara appears at Jame's side at President Marsden's press conference. She tells him how she feels like she has everything under control.

Meanwhile at the DEO, Alex trains agents in some intense hand to hand combat. She's interrupted by Brainiac 5 who tells her that the President is on her way... At that exact moment! President Marsden praised Alex for the work she's been doing at the DEO since she's taken over. Back at CatCo Kara and James find Lena back from her trip to Metropolis. She and James discuss Lena speaking with the DA about him being indicted for being the vigilante Guardian. But James tells her he wants to do it his own way.

Since leaving the DEO J'onn helps run a support group at the bar for aliens trying to fit in. There's some tension between the group but he and the other group founder, Fiona calm them down.

One of the members of the group, a Dr. Vozz, works at a laboratory where we meet two intruders who knock the good doctor down with a blaster, cut off the tusks he has growing out of his arms (ouch!) and use it to get into the lab. Without their knowledge the doctor sends a message on his phone and Supergirl comes crashing through the window. After using a super sonic sound to halt Supergirl they blast her out the window and throw gravity cuffs on her feet dragging her down into a small crater. With the help of Brainiac 5 Supergirl gets out of the cuffs and flies back to the lab where our intruders are about to escape with an EMP device. They throw a bomb at the doctor prompting Supergirl to save him and they get away. Supergirl meets J'onn at the lab and he tells her that he thinks this is a hate crime, while Kara thinks it's about something much bigger. After Alex and Brainy lock horns at the DEO, we're back at CatCo where Kara meets new reporter Nia Nal. After a cute scene with the two we travel to a warehouse where our intruders present the EMP to a helmet figure in the shadows.

Brainy finds out that the two intruders are Mercy Graves (Lex Luthor's former head of security) and her brother Otis. Supergirl decides that this seems like a good time to visit Lillian Luthor about finding their whereabouts.

Rating - 4 (out of 5): This was a great opening episode for the fourth season. So much happens. Between the threat to the alien immigrants to the introduction to some great new characters and the conflicts between some of our main characters, this episode was pretty packed! Personally it was great to see Lynda Carter back as President Marsden. While it seems she'll be in the next episode I hope she sticks around for a bit. And it's always great to see Brenda Strong as Lillian. She would like us to think she's turned over a new leaf but we know a plan is forming. Perhaps revenge?

Back at the bar no one shows up for group fearing someone might attack, while J'onn and Fiona discuss this someone throws a bomb through the window. Supergirl shows up in the aftermath and she and J'onn lock horns again over the attack. Afterwards, Kara and Alex discuss their "work" problems over some Chinese food and have a great sister moment.

Lena and Lillian have their own moment over chess in the prison's visitor lounge. They talk about Lena and Lex becoming enemies and how Bruno Mannheim laundered money from Lex. Lillian believes this is just a nice conversation with her daughter not realizing Lena is recording the conversation for the DA. Lena hopes that giving the DA info to help convict Mannheim will convince her to drop the charges against James.

Brainiac 5 tracks Mercy's heat signature to a warehouse were Kara discovers that there is a whole network of anti-alien activity. Brainy also finds out that someone has been looking at plans for Camp David. Mercy and Otis are going to attack the president's summit! After asking J'onn for help and getting turned down (because he wants to live a more peaceful existence) Supergirl heads to the White House. President Marsden refuses to cancel the summit because she won't let them force her to back down. So Kara and Alex hatch a plan to protect Camp David. While Supergirl hovers above and Alex is taking care of things on the ground, Mercy and Otis set off the EMP taking out the electricity. While rushing the President and the others to safety, Mercy enters and she and Alex throw down. As Mercy escapes she throws a bomb at Alex who's able to neutralize the bomb but not before Mercy gets away. Before Mercy and Otis take off on motorcycles Otis shoots a blast at the President which Supergirl intercepts. While Supergirl follows the brother and sister through the woods Mercy shoots Otis who falls off a ledge. Supergirl comes to the rescue only to realize it was just a ruse so Mercy can get away.

With Otis in custody at the DEO Alex decides its time to have a talk with Brainiac 5. Alex tells Brainy that change is hard for her and Brainy also realizes that he too has to embrace change and maybe their relationship will get better. Meanwhile at CatCo Kara gives new reporter Nia a pep talk on being more aggressive and James tells Kara she's starting to sound like Cat. There's a news flash reporting the District Attorney is dropping the charges against James. The DA then mentions at a press conference the info she's received on Mannheim which puts a mischievous smile on Lillian's face. The DA also drops that if James ever wears the Guardian costume again he'll be arrested. While Kara and J'onn make amends at the bar there's more news. President Marsden has been revealed as an alien. While this isn't new to Kara and Co the world now knows the truth. Afterwards J'onn asks where Fiona is. We discover that she's being held in a warehouse by Mercy and an agent of liberty who kills Fiona in the name of liberty. We then cut back to Kasnia where we find under the mountain a young woman training by punching through rock. It is our friend from the third season finale... "Red" Supergirl!

Great episode, although there really is a lot packed in. Several new characters and plot lines introduced they were really hitting us over the head. But saying that this episode was very fast paced and exciting. The scene were Otis cuts off the doctor's tusks was a little graphic and not totally necessary but I guess they wanted to show that these people mean business. Fiona could have made a nice love interest or just a good friend for J'onn but she's dispatched as well. Was the killer actually Agent Liberty or one of his agents? We'll find out soon enough. Lena duping her mother was dangerous but necessary to get James off. But now she has another secret from James. So far we didn't get much into Nia as a character but introducing her early will gives us time to get to know her. And deep beneath the Kasnian mountains another threat looms. Is she from the multiverse? Another timeline perhaps? I guess all will be revealed soon enough.