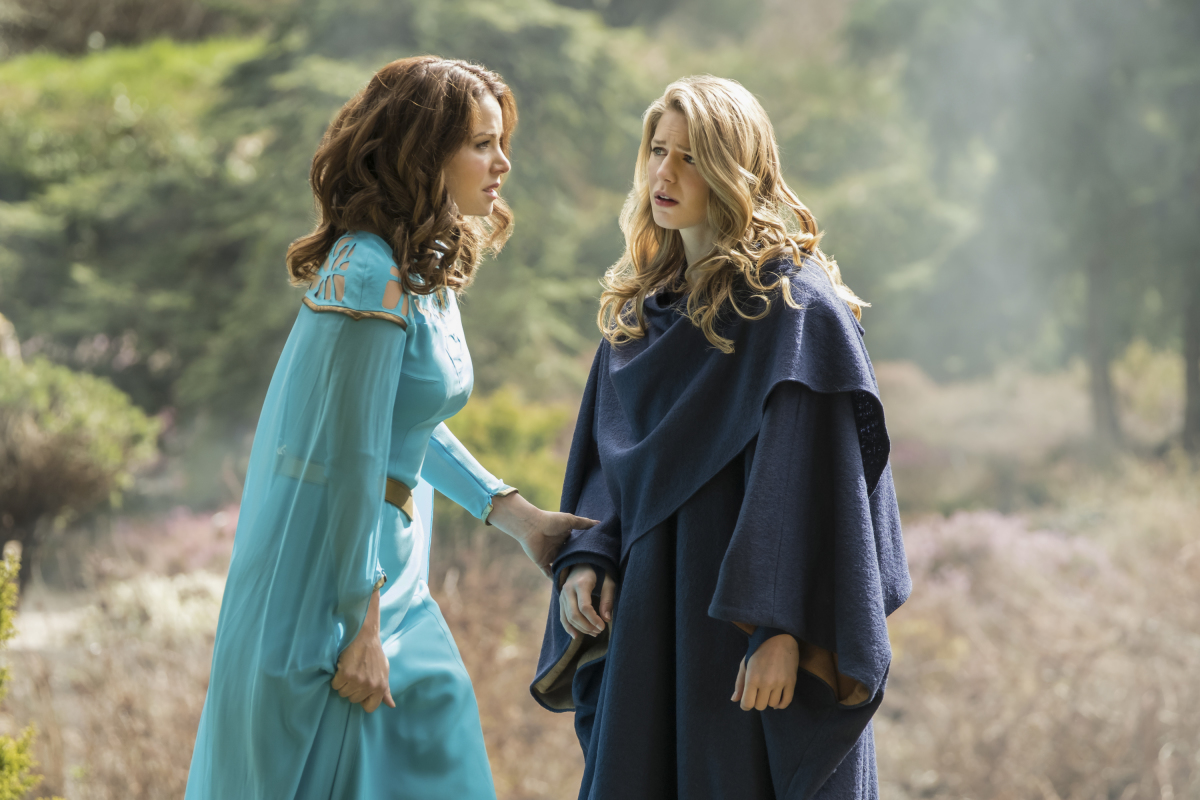 Rating - 3 (out of 5): We pick up from last episode with Supergirl and Mon-El in space heading towards the asteroid that contains the rock needed to cure Sam/Reign. But instead of just a big lone asteroid they find a huge domed city. They're caught in a tractor beam and shift the ship to look like a small asteroid and head toward the city.

Meanwhile Alex and Ruby go for some ice cream where Alex spots a shooter and after shots are fired he runs but not before throwing a grenade which Alex quickly disposes of. Someone is out to kill Alex! Back at Lena's lab Reign threatens Lena while playing on her fears. This rattles Lena who seems conflicted about if she's doing the right thing.

After Supergirl and Mon-El land they find a thriving city and steal some clothes to hide their costumes. After tracing the signal they come upon a memorial written in Kryptonese. Kara realizes she's in Argo City where she grew up before being sent to Earth. Suddenly they're surrounded by robots who are chased away by Alura, Kara's mother.

While we get a few revelations in this episode, it seems we're transitioning from this season's main story into a story that may very well play out next season. With the Argo discovery we're taken back to the Bronze Age of Supergirl when Argo City was still around and Kara could go and see her family whenever she liked. This will obviously change things up for the series. It's wonderful to have Erica Durance as Alura, not just because she has that Superman connection (Lois on "Smallville") but you can really see the emotion in her face and eyes when she's with her daughter. Kara and Alura have some nice scenes together and no matter what happens I hope Alura remains as a presence in the coming season. The rest of the episode was just going through its paces.

Alex's investigation into who's trying to kill her is just an excuse for her to question whether she can still be an agent and a mom. Alex and J'onn have a nice scene but we've heard the conversation before. Reign trying to bring out Lena's dark side is another attempt at making us question Lena's motives. A scene with Winn and Ruby talking about their killer parents was interesting.

And of course the rock that's needed to save Sam is what's keeping Argo alive thanks to Zor-El's ingenuity. This leads to Kara having to face the counsel to plead her case. The counsel is headed by Selena the evil Kryptonian who has been leading the Worldkillers to complete their mission. The counsel votes yes on giving Kara a piece of the rock, thanks to Selena's vote. With rock in hand Mon-El and Kara leave Argo City to arrive on Earth just in time. Reign is mad and she's busting loose.

There's a lot going on with Argo City which I'm sure will be explored in the coming episodes. Selena being the head of the counsel was a bit of a surprise and with Kara thinking about living on Argo permanently, it is obviously going to be an interesting dilemma. The other stories were just furthering the plot and nothing that hasn't been explored before. This wasn't a bad episode but again it's just transitioning into the next story and reminding us of certain characters' ongoing dilemma. The next couple of episodes should ramp things up a bit and hopefully we'll get an exciting season finale.