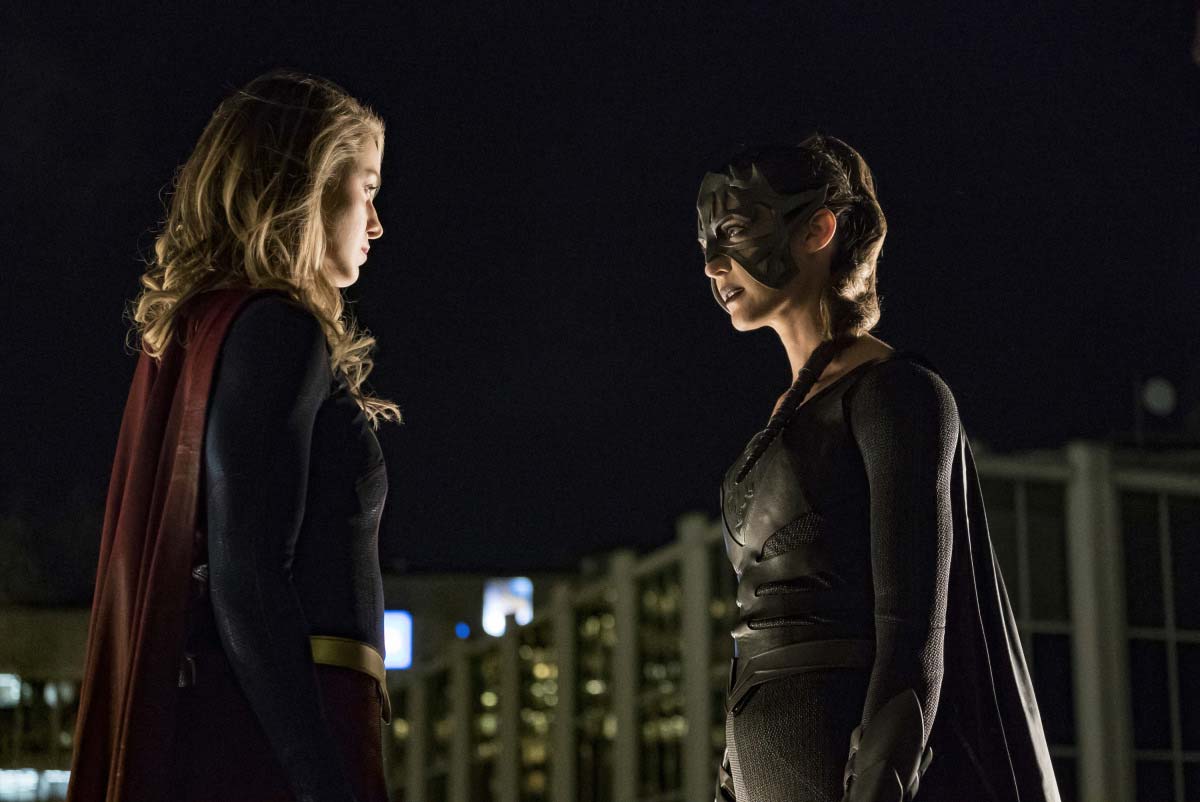 Mid-season finales are a tricky thing. Writers want to sling into the hiatus with a bang and a tease - to attract viewers to return - while at the same time saving their true gold for the back end of the season. This makes most mid-season finales feel like something part way between a normal episode and a (full) season finale. This week Supergirl broke that rule (as well as Kara's face), in an episode that felt superior, in power and delivery, to all of the show's finales up until this point - mid or otherwise.

Early on, Imra - with her superb accent and "Greek-goddess looks," as Kara put it - mentioned the Legion. The Legion of Super-Heroes is a team-up that the show has long-teased by showing us a ring and dropping a mention here and there. Finally, it looks like we're going to see the Legion band together and form. If you watch the promo for Supergirl's return (which will be on January 15), you'll see a very brief scene where three hands, sporting rings, align in a row.

The callback to Thomas Coville was skillful writing. It showed that 'The Faithful' wasn't just a (very worthwhile) detour, to explore the notion of Supergirl as a god - it had an extra function too; to place Coville in a position where he could later inform Kara about the history of the glyph. "The lost gods must fall for a new god to rise," he told her, speaking of a "dark god" and of a goddess before Rao. "She will reign, unless you stand and fight her," he warned.

This ultimately led to one of the best battles we've ever seen on the show. Yes, it was placed among jaunty holiday songs, Christmas parties and flying presents, but that festive levity didn't detract from the brutality of the fight. Kara bruised and bled, under Reign's ruthless blows (no kryptonite was used, which means Reign's sheer strength accomplished this).

Kara more than held her own, too - likely bolstered by Alex's plea: "I've been trying to get you to embrace your humanity, but forget that; be cold, be Kryptonian... Be alien" - but ultimately Reign devastated her. I actually feared for Kara's life by the end (as comics and the DCEU have shown, it's possible to kill a Kryptonian and then bring them back to life), but the promo for January shows her slow recovery and reminds us that we should 'never underestimate the Girl of Steel.'

Just like Kara, Edge nearly met his end at Reign's hands, but his lead-lined panic room and quick thinking saved his life. Part of me wanted Reign to kill him - as great as he is to have around, it would have been the punctuation mark (along with pummeling Supergirl) that showed how formidable Reign really is. But I'm happier that they kept him around, as there's clearly far more to come from this intriguing villain, as long as Reign doesn't overshadow him, going forward.

The Mon-El/Imra/Kara content was very welcome this week. It was really nice to see Imra address Kara so directly and honestly about what happened, trying to assure her that it was no easy change for Mon-El. There's a theory circulating, however, that Imra has used her abilities (telepathy and mind control) to manipulate Mon-El into marrying her (or to paint the illusion of marriage).

Those who believe this point to the necklace that Mon-El retains as a sign of his mind not letting go, because it knows something's not right. If this proves to be true, it will be a fluid way to bring Kara and Mon-El's relationship back into play. However, given that Saturn Girl (Imra) is meant to be part of the Legion that they'll form, revealing her as an enemy seems counterintuitive to that goal.

The Lena and James romance wasn't as welcome - I don't think their sparring at work has ever really hinted that something romantic lay beneath the surface, so their "chemistry" felt a little out of the blue this week. When this eventually translated into a kiss, it seemed more than a little forced to me, from a writing point of view.

No one mentioned the crossover this week, which felt a little odd, given how Reign's black attire looks so close to Overgirl's. Some of Glen Winter's directorial choices were a little strange too. When Reign slays the criminals by the dock, it's almost akin to a werewolf attack from an 80s horror film - the shots are intentionally blurry, fast and all too quick to follow.

It's baffling, too, why the episode's very final shot doesn't show Samantha's face, as she turns around to face Ruby. She's clearly in Reign-mode, but even if her face is full of runes once more, it's nothing we haven't seen before. It makes me wonder if her physical looks have begun to change and the creators are going for a non-human look after all. Maybe when we come back, she'll look like something a little closer to the visage of her comic book counterpart. We'll have to wait until January to find out.