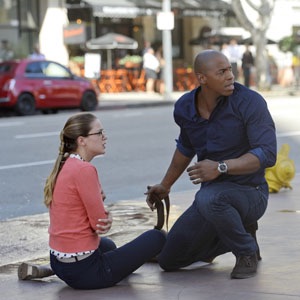 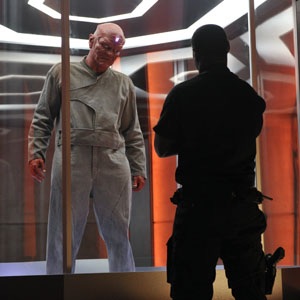 Rating - 4 (out of 5): Supergirl is only seven episodes in, and yet it feels as if a full season's worth of content has occurred. She's made her appearance, won the hearts of National City, roughed up the baddies, improved at every turn, and in this installment, she goes one step further in her triumphant march towards quintessential heroine. Supergirl makes no disguise in its outright theft of great Superman characters and moments, and they are fully in display in "Human for a Day". For the comics reader, the path to her losing her powers is clear, as the "Solar Flare" originates with her in the New 52 reboot, is transferred to Superman, and then back to her for the purposes of this episode. It's very early in the day for Kara to have a storyline without her powers, and one can only hope that it's handled better than the addiction-crave that was foisted on Superman in the comics, but it allows for probably one of the strongest moments in the series thus far, and something that has been missing from Superman in both film and comics: heroism.

When Supergirl confronts the armed robber, with nothing but her outfit and her willingness to do right, it would seem that she's overmatched. However, and quite quickly, she's already transcended mere branding and become a symbol for National City. A woman may fail where the heroine may succeed, and the heroine may still come short, but the symbol possess the power to evoke even more... Which is what happens, she moves the robber to want to be better, to be more than he is in that moment. If this weren't the case, if the robber didn't believe he was capable of more, we'd have seen a fusillade on his part, and be left with one less heroine. However, he stands down, as Supergirl's intangible power to move him proves greater than any other she's displayed. In an onslaught of superheroes being offered, this sort of scene is rare and becoming rarer, as writers have latched onto the idea of life-defining angst and cynical exploits being what these characters should be about. They write superhumans, but not superheroes. Heroes move us by what they represent, and too often these days, the antihero is marketed as the opposite. Thankfully, Supergirl is a reminder that we can be better, if we truly want to, and the greatest power we possess is to move one another positively.

The fanboy in me was left in the lurch with the Martian Manhunter reveal. It doesn't make much sense, and many had surmised Henshaw's true nature some time ago. The misdirection is aimed squarely at long-time readers, and I cannot say why. Martian Manhunter by any other name is still J'onn J'onzz, but Hank Henshaw? Needlessly deceptive to say the least. I feel for Winn, but man, why are you even trying? Jimmy's a foot taller and can take his shirt off without embarrassing himself. You've no power here, my lad. Speaking of Jimmy Olsen, that's not Jimmy Olsen. Nick Spencer's Jimmy Olsen has Jimmy in it, but Supergirl? That's a whole new character, and it would have been cool if he was introduced as such. Alex taking on Jemm, Son of Saturn (and when did he become a villain?) was just foolish. Show her to be tough, resourceful, resilient, but not an out and about fool. Lastly, Supergirl still needs a proper villain. We'll see if Aunt Astra, the Assonance Killer, can fit the bill in the mid-season finale.