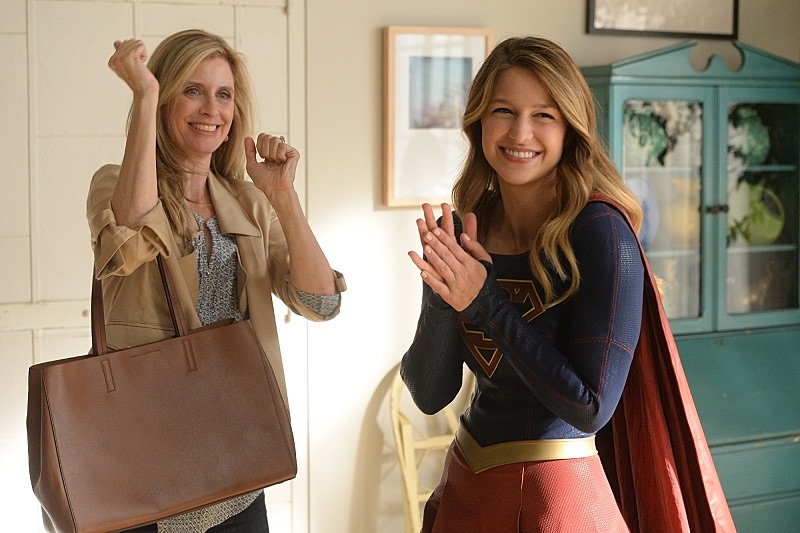 Rating - 4 (out of 5): Supergirl continues in her stride, in yet another entertaining episode, with features from Superman family members Dean Cain and Helen Slater to complete the package. The opening sequence displays some pretty impressive wire-work, and returns the show to its premise: the location and apprehension of dangerous aliens... which is about as compelling as a melted cone. The physical resemblance between Leigh and Benoist is palpable in this installment, which adds to the theme of family/mother-daughter dynamics aimed for. Livewire goes for the jugular even before becoming super-powered, with the skewering line: "puncture the chastity belt of steel". It's a fun romp, that's balanced with surprisingly weighty issues as well, specifically the tenets of Free Speech without decency, and empowerment absent criticism. The biggest missteps are due to the episode being out of sequence, and outright theft from Smallville and Superman: The Animated Series. It's the former that really has my focus for this review.

I was really looking forward to the episode advertised, as the visuals shown were intriguing. However, due to the horrible events that transpired in Paris, France, CBS, wisely, shuffled the deck and ran with "Livewire" instead of "How Does She Do It?" I don't know how many, if any, readers of this review have been to Paris, but I have on more than one occasion. It's a beautiful, magical city. The history, the architecture, the food, but most importantly, the people. Much is said of French manners, but I never found them to be anything other than kind, friendly, and hospitable... even the gendarmes. Parisians are a vibrant, fun-loving set, and the idea of anyone committing acts of such reckless hate against innocent people is terrible, but in Paris, for me, it really hit home. It's where I learned French, along many other things, and the thought of anyone not being able to enjoy the City of Lights, and all it has to offer for fear of the worst, deeply saddens me. I wish Paris, and all people of the like well.