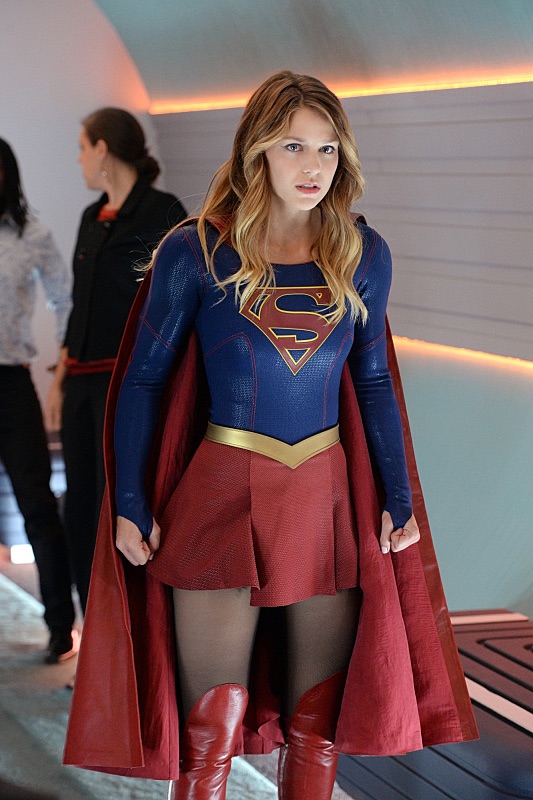 Rating - 4 (out of 5): Supergirl needs a villain. The other pieces are in place, and being played quite well. Supergirl is a quintessential heroine, with her supporting cast firmly astride of her. Cat Grant has received the best development thus far, with two episodes that highlight her heart actually beats, with Wynn doing his comic relief best thus far. Jimmy Olsen is doing the "hunk of burning love" pose and that's fine for now. Alex, Hank, come in as needed. The opening of the episode was the mark that highlights the need for a competent nemesis for the Maid of Might. Supergirl soars through the skies of National City. She's bright, happy, endearing... until her flight is disturbed by a drone spying on her. How much better if there was a figure to actually challenge her? The set-up of events, that Maxwell Lord concocts in order to gauge her abilities isn't a poor one, but it still lacks the force needed for where Supergirl is, surprisingly, after only five episodes.

When we first encounter Kara, she's having difficultly flying because she has suppressed her powers for years. This installment shows her save a falling building quite aptly and with no loss of life. The progress there is redacted when she must discard a bomb, and ends up rendered unconscious by it. It's fine that we see Supergirl struggle with the tasks to an extent, but the bomb should have posed no threat to her. She should have shot-put the thing into orbit and resumed what she was doing. Those types of challenges tend to diminish heroes of great power, and Supergirl has been taking great strides towards her full potential. However, where a bomb thoroughly fails, a physical foe, one recurring and with the gravitas to make viewers concerned about the situation and Supergirl is different. The villains of the week haven't met that challenge. Neither has Astra or Livewire. Maxwell Lord seems to be shaping up in proper Lex Luthor fashion, but as of this episode, the jury is still out. A proper villain is the last piece needed for the show; it's clicking on all other parts.

There's been some needless comparison of Supergirl to other superheroines i.e. Jessica Jones, who's an anti-hero at best. There's no form or pattern that needs to be followed, neither any limit to the diversity of characters presented with superpowers, if not super-character. However, this installment has Supergirl watch as a man blew himself to bits, which I found to be a heavy and rough moment for her. I won't make argument or debate as to whether or not she could have done both: save the train and the bomber, but the scene serves as a reminder that things change. This episode that started with daylight and color, ended with night and shadow. There will be "darker" turns for Supergirl; tests that will make her question her stance, her values, herself, and they'll be well-received if done right... and with a proper villain.