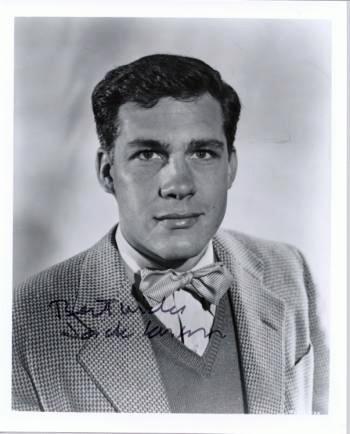 Character: Jimmy Olsen in the Adventures of Superman TV Show (1952-57)

Played Jimmy Olsen in "The Adventures of Superman"

Jack Larson was born in Los Angeles on February 8, 1928 and raised in Montebello, California. His father was an East Los Angeles milk-truck driver and his mother a Western Union clerk. He was the only child of the couple who divorced while he was still young. In an interview, Larson was a self-admitted "bad boy". "I remember my parents getting so upset because I was flunking school."

While he did not enjoy school, Larson did like to bowl. By the age of 14, he had become the California state champion for his age group and was good enough to think that he would eventually turn professional. But, in the fall of 1945, Larson enrolled in the Pasadena Junior College (now known as Pasadena City College), an event that would drastically change his life. Larson said, "my instructors discovered that I had a gift for writing and motivated me to write plays, and to be in plays as well." His first works were strictly metered verse and then plays with roles written for for himself to act in. During the fall of 1945, he starred in Charley's Aunt, a play by Brandon Thomas, and in the spring of 1946, he starred in Fantasy in Wonderland a musical he wrote. Larson recalls that "My parents, were stunned. They were very happy to see that I was doing scholastically much better at PJC than I had done at Montobello."

In 1947, Larson wrote Tambourine, a musical operetta and followed this with Balguna Del Mar, a musical comedy about college students vacationing at Laguna and Balboa beach during spring break, in 1948. During the run of that play, Larson, who was playing the lead role, was spotted by an agent for Warner Brothers and offered an audition. To a young stage actor the opportunity to be in films sounded like the chance of a lifetime, and soon after the audition, Larson signed with Warner Brothers. At the age of 15 he won a part in Fighter Squadron, a post-World War II film directed by Raoul Walsh. This film also featured a newcomer named Rock Hudson.

In 1951, At the age of 18, Larson felt that he well was on his way, setting his goals on Broadway. But, his agent came to him suggesting that he audition for the role of Jimmy Olsen in the new television show, The Adventures of Superman. Initially Larson balked at the idea because he was intent on becoming a serious actor, however, the casting director persuaded him by saying, "nobody will ever see this show. It's like doing a Saturday morning serial. Just take the money and run." Larson accepted the job, filming the first 26 episodes in less than five months and receiving about $250.00 per show. 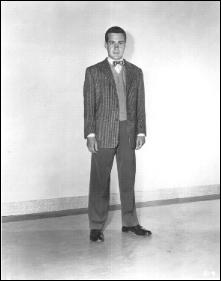 Once filming ended, Larson left Los Angeles and moved to New York to take on new projects including the film Kid Monk Baroni (1952) which also starred Leonard Nimoy and Bruce Cabot. On February 3, 1953, the Superman television show premiered and became an instant hit. Suddenly, Larson was recognized everywhere he went as "Jimmy Olsen." Not only did he feel trapped by the character, but according to Larson he was tied to a run-of-the-show contract which prevented him from doing any other serious acting work. Fearing that his reputation as a serious actor and playwrite would be damaged by this television role, Larson refused to do any interviews or publicity regarding Superman distancing himself from the show in hopes that producers would quickly forget about his role of Jimmy, and hire him for more serious roles.

However, it was difficult to take Larson seriously in a role where his most famous lines were "Golly, Mr. Kent" and "Jeepers," and where he was continually being beaten up by gangsters, bringing a whole new meaning to the term "helpless sidekick". In the later shows, it appeared that Larson's sole purpose was to convey wide-eyed innocence after being abducted, tied up and sealed in some kind of vault so that Superman could rescue him over and over again.

Unfortunately for Larson, producers did not forget about that role, and he was forced to accept the reality of the situation, He appeared in six seasons of Superman. Larson also noted that before his death, George Reeves had been signed to direct and star in a seventh season of 26 new episodes of Superman that would appear in 1960. Still, Reeves was despondent. "I know George was depressed. I know life was a mess for him. I don't think the 26 episodes meant a lot to him. It meant a lot to me - I needed the money," Larson says. By that time, Larson was making approximately $350 per show and Superman was as popular as I Love Lucy. However, "We all were typed," recalls Larson, "you could not get another job."

After Superman concluded, Larson was basically unable to find any work. His agent went so far as to book Larson on a project in Germany when other offers dried up. Larson did appear with Ethel Barrymore in her last feature film, Johnny Trouble (1957).

Eventually Larson gave up acting to concentrate on writing plays and musical librettos. Over the next decade, Larson wrote The Candid House, a retelling of the Hansel and Gretel story for the opening of the Bing Center Theater, Chuck, a Broadway play about an epileptic magazine salesman and Cherry, Larry, Sandy, Doris, Jean, Paul, a comedy about being gay. One of his more prestigious assignments was a collaboration with noted composer Virgil Thompson. which has been released on CD. 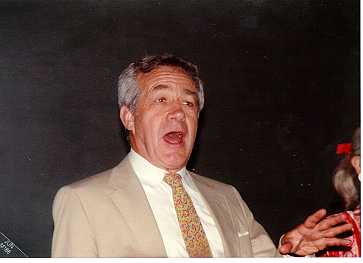 During the late 1960's and early 1970's, the man that had played the meek and mild cub-reporter took a very strong political stand, frequently speaking out against the war in Viet Nam. At that time, this was not a popular stance, and did little to help his career.

Still, as much as Jack Larson sought to distance himself from "Jimmy Olsen", it was that character that brought him back to acting. In 1994, ABC began production on Lois & Clark: The New Adventures of Superman. Initially, the producers asked Larson to contribute to the show, but he preferred not to become involved and explained, "The one thing I would never consider is doing another television series. I believe that you only have to do it once in a lifetime. I did mine in Superman, and feel very fortunate to be remembered as Jimmy." But, in episode 5 of season 4 ("Brutal Youth" which originally aired: October 20, 1996), Larson did appear in Lois & Clark playing an older Jimmy Olsen. He also appeared in The Adventures of Superboy, along with Noel Neill, in an episode called "Paranoia". That show was a dark homage to The Adventures of Superman, with Larson saying "Jeepers" at one point and making reference to having worked at a newspaper.

In 1996, Larson attended the annual Superman Celebration in Metropolis, Illinois, for the first time, to help publicize an auction to raise money and increase awareness as support of the Reeve-Irvine Research Center at the University of California Irvine - a facility dedicated to spinal cord injury research and named for Christopher Reeve, star of the Superman films, who suffered a paralyzing injury a year ago.

In 2003 Jack had a new work CD released entitled More Than a Day, composed by Ned Rorem.

Continuing his long contribution to the world of Superman, Jack was cast in the 2006 blockbuster film "Superman Returns" as the barman known as Bo (Bibbo).

Today, Jack Larson lives in a house overlooking the sea, that was designed by Frank Lloyd Wright, with his dog Max. He remains close friends with Noel Neill.