Examining the Superman Costume for "Supergirl" 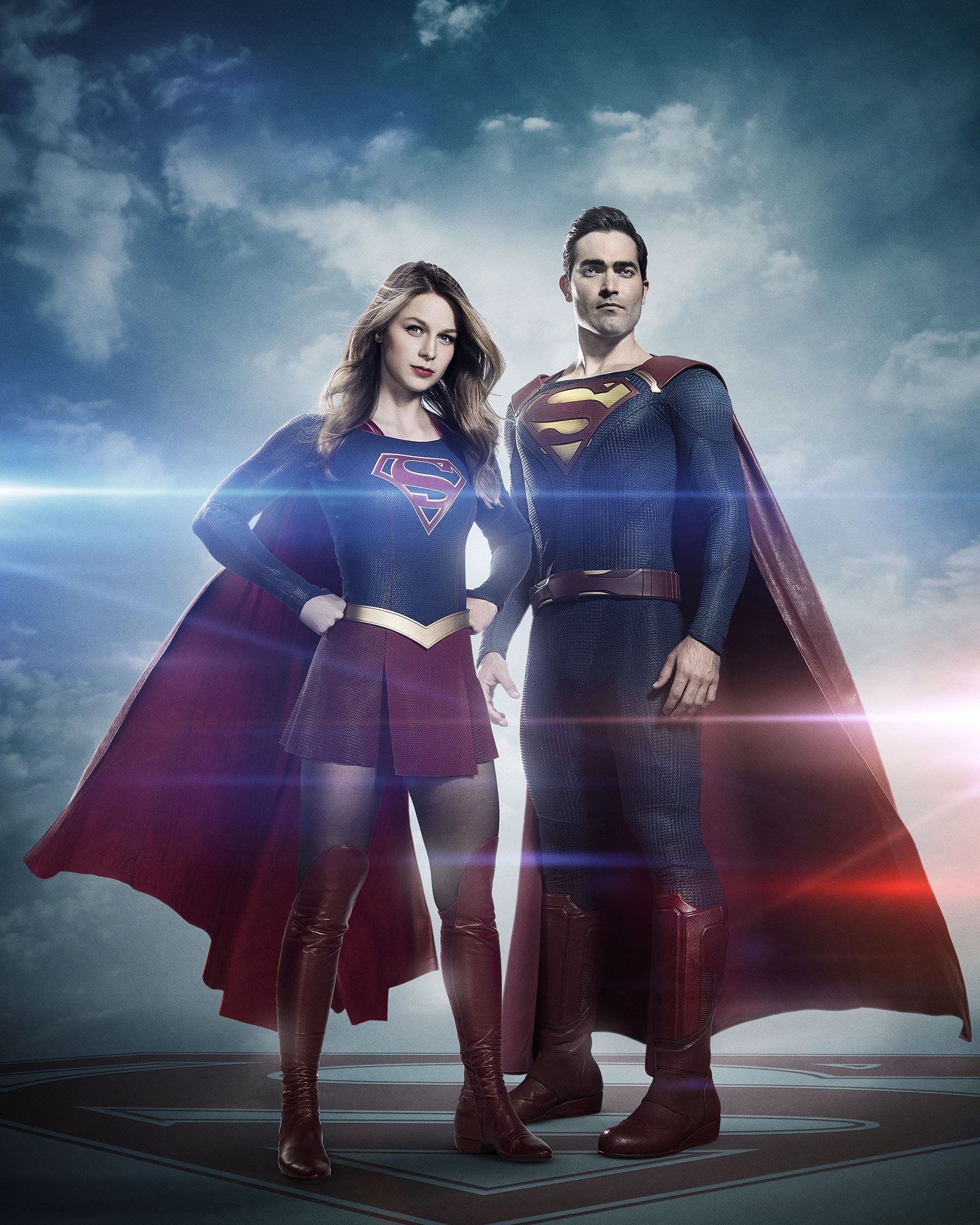 In this article I'm going to be examining, in detail, the Superman costume for the "Supergirl" TV series. I've previously written similar articles for when the costumes for "Superman Returns", "Man of Steel" and Supergirl's own costume for this TV series were revealed.

Initial Reaction: At this point in time we've only seen the one photograph of Tyler Hoechlin in the Superman costume, standing next to Melissa Benoist in her familiar Supergirl costume. I don't know what it is about these initial photographs that the studios release, but they always seem to fall short in one area or another. The lighting, angle and shadows don't help Tyler's cause here... Especially when it comes to his body shape.

Seeing as how we can't really see the cape in full in this photo, I'm going to assume that it's the same material and color as Supergirl's cape, which looked just fine in Season 1.

The length of the cape is fine. It sits just around ankle height, which I think is great for a Superman costume. It seems a little longer than Supergirl's, but I'm fine with that.

We don't know if there's a yellow version of the "S" emblem on the back... But, as always with this feature, I'm not too fussed either way. I'd prefer to see it there, but it's not essential.

As with any cape for a Super-family member, the most controversy seems to be about how the cape attaches to the costume. Unfortunately, I think this is the weakest design element of this costume. I'd much prefer to see the cape tuck into the top of Superman's costume the way it does for Supergirl. That looks much more natural. The gold "clasps" attaching the cape to the front of Superman's shoulders doesn't look natural at all.

Once again, due to the lighting in the photo it is very difficult to tell just how blue the main part of the costume really is. The color doesn't seem to be too different to the blue in Kara's costume, which looked good in Season 1.

The neckline is fine, but does seem a little low or exposed, but I think that's mainly due to the fact that the cape doesn't tuck into it as explained above.

As with all recent Superman costumes, the material appears to have a small repeating pattern throughout the blue material. It looks very similar to Kara's costume.

Where Supergirl's costume has red seam lines that extend throughout the design, Superman's "seams" blend more with this costume, but there do appear to be more of them. This design feature may be inspired by the New 52 costume, which had similar design elements. It does break up the blue fabric and gives form to the bodice of the costume without being distracting. Unlike Supergirl's sleeves, Superman's end at the wrist.

The shape and design of the "S" shield is the best thing about the costume. Period! The size is just right. The "S" is probably the best one I've seen on any Superman costume. It has the rounder end to the tail of the "S" (unlike Supergirl's straigher design), and has the yellow background rather than just a yellow border.

Once again the "S" has been given a solid presence rather than just being part of the fabric of the costume. The "S" has a softer texture than the fabric/material.

There are no trunks once again in this costume design. I think that will likely be the standard for many years to come. With Supergirl sporting a red skirt I did think that the red trunks may make a return of this version of the Superman costume... but no.

Having become used to this look for a number of years now, I don't really mind that there are no red trunks. They don't even seem to hint at them with a seam or line as they do in other Superman costumes (especially in the comic books). Yet it doesn't look odd at all.

Next to the way the cape connects at the shoulders, the belt is the other element I like least about this costume. While the belt serves no practical function without trunks, the costume as a whole does need something in this area to break up the solid blue. The mostly red belt, with black and gold elements at the front, just looks "bulky". There's no "buckle" as such, and the over all appearance of it just looks odd to me. I actually prefer to non-belt design in Henry Cavill's costumes over this.

As I've said before, I've always preferred that Superman's boots be of a similar material to the rest of his costume, however here, they appear to be a leather boot.

The boots don't have the classic "V" design at the top just below the knee, but the height of them does seem just right. I'm not sure that I like all the extra design lines and Roman Soldier "armor" feel they've been given. But the boots as a whole aren't a problem. They look fine.

Now for the man wearing the costume...

I only really know Tyler Hoechlin from his role in the TV series "Teen Wolf". I was happy with the casting announcement and think he'll do well playing the part of Superman in the "Supergirl" TV series.

He looks the part. He has the strong jaw, the straight nose and over all good looks. The way they've heightened his hair doesn't suit him though. His more natural look, with the fringe more on his forehead would probably be more suitable. His hair here just elongates his face, making him look skinnier than he already does.

While Tyler is in good shape, I think we've been spoilt with the more muscular look Henry Cavill has brought to the part. The shadows falling in this photo, especially the one under his left arm, don't help. They hide the fullness of his torso, making him look too slim in this photo. He may have been better served doing the same pose as Melissa.

It would have been nice to show them both smiling. They've been hyping the "hope" symbolism of this show for some time now... Would it hurt to see them looking happy in one another's presence?

As with any costume reveal for an iconic character, Superman's costume for the "Supergirl" TV series has created a lot of debate amongst fans. While reactions haven't been overly positive on this first look, I think fans were expecting more simply due to the fact that the creators of the "Supergirl" TV series displayed a willingness to embrace a more classic design for Supergirl's costume.

All in all, I'm not as impressed with the Superman costume here as I was with Supergirl's costume reveal. I will reserve my final judgment until I see Tyler in the costume in action.