Learning a Widescreen Lesson from Superman

I've never been taught, just figured it out. And if you're like me, you know it's not rocket science. Nothing to really be boasting about. Anyone can do it, but it's surprising just how few people bother to figure it all out.

So how does this relate back to Superman? Well in a round-about way it does. You see part of my role as the family "technical" guy is explaining this whole "wide screen" thing to family members who have standard 4:3 television screens. And, as I'm prone to do, I thought back to a revelation I had re-watching "Superman: The Movie" in wide screen for the first time after many years of only re-watching it on a standard 4:3 TV set.

"Letterbox" and "Widescreen" are generally used interchangably in discussing this sort of thing. There are differences between the two words, but for the sake of this example I'll simply be comparing "widescreen" to a "standard" TV set (meaning 4:3 ratio). If I've already lost you with this jargon, don't worry, check the accompanying pictures to help you out. The image below-left shows the shape of a standard TV set, while the image below-right shows the shape of a widescreen movie.

When you watch a widescreen movie on a standard TV set you see what are commonly referred to as "black bars" at the top and bottom of your TV screen. People mistakenly think this is bad. They think that they're somehow not using the full potential of their TV screen. So they "zoom in" or reconfigure the picture to make the movie's image fill the height of the TV screen, and feel better about it. The problem with doing this is that you're actually losing a fair portion of the movie image and a great example of this comes from "Superman: The Movie". The image below shows this "black bars" example. 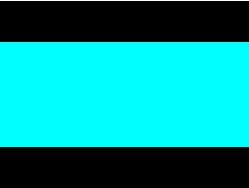 In the example shown below, you'll notice a still-frame taken from "Superman: The Movie". Lois Lane has just fallen from the crashed helicopter at the top of the Daily Planet building, and Superman has flown up and caught her. The scene shown below is of the crowd staring up in amazement. The woman on the left with microphone in hand says, "He caught her! I can't believe he caught her!"

Over the years, whenever "Superman: The Movie" was shown on TV, they'd never air it in widescreen, it would always be shown in "Pan and Scan". In laymen's terms this means they "zoomed in" the picture to the full height of the TV screen so the "black bars" would not be seen on your TV. What this meant for me, was that each time this scene was shown on TV, I'd never see the lady with the microphone. I'd hear someone saying, "He caught her! I can't believe he caught her!", but could never see any of the people on screen actually saying these words, and it always seemed very odd to me... I thought it was bad editing or an over-dub of audio on a scene that didn't actually match. 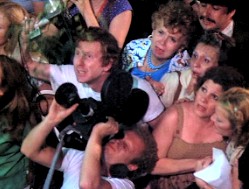 Little did I know, back then, that there was actually a lady, off screen, actually saying those words! Yes, I saw "Superman: The Movie" at the cinema when I was 7 years old, but re-watched it time and time again on TV at home in the years to follow, and it was those subsequent times re-watching the movie that this "odd" scene came to my attention.

When the Special Edition of "Superman: The Movie" was released to DVD, I finally was able to see this woman speak the words into her microphone. And I was amazed when I saw her. The phantom voice finally had an owner! :)

Needless to say I now watch every movie in widescreen, I even went out and bought a widescreen TV. But whenever I go over to watch a movie at someone else's house with a standard TV set, and when they complain about the "black bars", I use the example above to show them how they could actually be missing out on important parts of the movie if they "zoom in" and resort to "Pan and Scan" viewing.