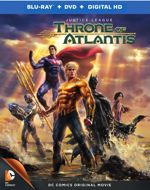 Justice League: Throne of Atlantis is the sequel to Justice League: War. On the night of January 12, 2015, I had the pleasure of attending the Los Angeles premiere and by the close of the film I felt I got a good feeling for who Aquaman was. The first thing you have to keep in mind is that it is an Aquaman movie, not a Justice League movie. Sure, the Justice League name is on it. The name is on the poster. It's on the box. We see the Justice League characters in the movie. But it's an Aquaman origin movie in all it's right based off the Geoff Johns' Aquaman (and Justice League run). You are not going to get a whole lot of meat with the other characters. It's about Aquaman. I find it refreshing to see, because let's face it, Aquaman has been one of the lesser developed characters in the DC Universe. It wasn't until Geoff Johns revived him in the New 52 that we really got an Aquaman with some kick-butt glory. And don't worry, you won't see the seahorse. This is an origin film that takes you on a journey into Arthur Curry's life. He is a troubled young man, half human and half Atlantean. Mera appears as the love interest, and Aquaman has no problem with love.

What I find great about this film is that DC is starting to realize that there is a market and interest for the other, lesser characters. They've done Superman, and done Superman and done Superman, and they've done Batman, and done Batman and done Batman. But let's face it, Batman/Superman...we have the movie coming out in 2016. Do we really have to keep seeing these two again and again as the capstone stars? Batman and Superman can get run into the ground, and eventually to the point to where you just want to see something more than that psychology. Green Lantern had his spotlight recently, and Flash got his spotlight with Flashpoint. So it only seems fair to give some of the other characters a chance too.

I'm still waiting to see the Wonder Twins. DC at this point is trying to steer away from anything hokey. No flights, no tights. Keep the heroes above third-grade mentality. And now, it seems they're pointing out how the superheroes have funny names. When Aquaman is asked what he wants to be called toward the end of the film, he is like "Err...." Then Shazam tells Aquaman that they are calling him Aquaman "online." So that's his name. Aquaman's reply is, "I hate that." Stop! Is DC teaching kids to make fun of the hero names; that superheroes have funny, goofy names? DC is good at placing in subtle jokes, but at some point let's just let loose of reality and leave the codenames alone. Pretty soon, Superman is going to be just Clark. And everybody will know their secret identities. I see no point in Aquaman saying that he hates his codename. Batman, Superman, Green Lantern; they're not complaining. I'm not complaining. Just let's get over the fact that Superheroes have funny comic book names, shall we?

At the Throne of Atlantis premiere, I got a chance to interview Chris Gorham who plays the voice of Flash. He jokingly pointed out that Flash wasn't on the front cover of the poster. I was like, how could they do such a thing (jokingly in return)! But to be honest, Flash isn't seen in the film that much. Batman gets the surface treatment like Flash, as does Green Lantern. Superman and Wonder Woman get a bit more screen time, but for the most part, the rest of the Justice League drops in to offer a few good jokes, then they disappear, then show up for the final battle. This is Aquaman's movie. Even more, it is Orm's (Ocean master's) movie. Orm gets far more screen time then most of the Justice Leaguers. Flash is a set piece. He tries to get Orm down one time only during the fight, and that is about it.

Cyborg! DC wastes no time...DC really does give him some great moments. Throne of Atlantis takes the energy and effort to develop Cyborg further. Cyborg is having trouble adjusting to his own mechanic strength and dealing with his metallic manhood. He proclaims in one scene, "I am more machine now than man." Towards the conclusion, sparks fly when he finds love. Certainly, the lesser characters get great coverage in Throne of Atlantis!

In Justice League: War the beginnings of a love-seed between Superman and Wonder Woman is placed. In Throne of Atlantis, it starts to bloom. Nothing serious, but Lois comes into the picture to add some subtle jealousy. She only shows up in the film for that one moment. Clark and Diana go on a date. And at the local hamburger joint Lois joins them, and sees hands touching. Lois notices then criticizes Clark as being somewhat of a "cheap" date. The running joke, of course, is that Superman is living off a reporter's salary. Diana, of course, is clueless on how the whole dating game works. The street corner hamburger joint sounds good to her. Being that she is from Paradise Island, eating grapes from trees is the closest thing to romanticism Amazon's get. Is anyone getting tired of seeing Superman with Wonder Woman? This would have been the classic time to introduce Lori the mermaid. Lois reminds us that that's Clark, nice. The humor works in this film, for the most part.

Shazam. The only true disappoint in the film. One of the most powerful beings in the universe, and he is just an overgrown kid who doesn't understand his own strength and power. At least, that is how he is portrayed. We get one interesting and cool moment with Shazam in the entire film. When he fights Orm, Shazam falls hard, and that is when Orm (Sam Witwer) stands up for a showdown against him, laughs wickedly, and then turns Shazam into a punny kid with little to no effort. The world of magic is no match for Orm, as he quickly thwarts the inner child out of the man. Sean Austin still does a great job at playing the adult within the child voice. But I would like to think that after calling forth "Shazam!" the full-on superhero would emerge in all his glory and well, something hard-core. Again, Shazam is there because he is supposed to be there.

Sam Witwer is a great villain, period! There is just no other way to put it. If you are a Superman fan, then you will know that he played Davis Bloom aka Doomsday in Smallville. For an entire season he was a series regular and held down the main villain role. He is now venturing off into DC animated movies. If you are not familiar with Sam's work, you might want to check it out. He does villains in just about everything! Literally! He is the voice of Darth Maul on the praised Clone Wars animated TV series. I would be inclined to say that Sam Witwer developed the Darth Maul character far more than what we see in The Phantom Menace. As Ocean master, his portrayal alone depicts a villain not to be messed with. I just wish we could have had more action with the other Justice Leaguers.

As for other villains...Black Manta also appears in Throne of Atlantis. A real treat, you will be pleased to see another lesser villain.

Heath Corson, writer, adapting Geoff Johns work... I have taken a likeness to his writing and look forward to seeing more of his adaptations. Corson enjoys adapting Geoff Johns work, but at some point I would like to see him adapt some of the older, more classic Superman stories (and that goes for Justice League too) to get a really good taste of what he can unleash.

Justice League: Throne of Atlantis is a good sequel to the previous one but not really a Justice League movie. It is a good origin adaption for Aquaman. I know they can only do so much in a 70+ minute animated movie, so a choice was made to focus more on Aquaman than on the other characters. DC and Heath Corson can now venture further into the New 52 without leaving behind one of the lesser, great characters.

There is a redeeming quality in not seeing the seahorse, but it would have been a brave choice to see the sea horse! Aquaman is here. Sam Witwer, the awesome surprise!