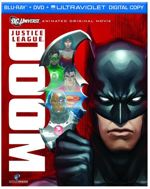 "Justice League: Doom" is a fast paced, drama filled, action packed animated movie. It feels longer than the 77 minutes it reportedly runs for.

The DC Universe animated movies always have great opening title sequences, and "Justice League: Doom" doesn't disappoint. The graphics and music combine well. I thought it was quite smart that the title sequence gives the feel of computer database files outlining the profiles of each character, especially when it comes to listing who the cast members are and highlight which character they play.

The film itself starts off with the Justice League up against the Royal Flush Gang. Most of this fight sequence had been revealed online via the sneak peek video clips Warner Bros. released to help promote the movie. It's great to see them all in one seamless fight sequence, and it sets up the story nicely, introducing the characters and their abilities for anyone unfamiliar with them.

I won't spoil the rest of the movie's story, but I will say I was extremely impressed with it on the whole. The pacing was spot on, and as I said above, the movie felt longer than 77 minutes. A lot of story was packed in, and each character is given their due time on screen. Batman is obviously the main focus, being the one who is at fault for the danger the team find themselves confronted with, but he doesn't steal the show, nor is he the sole savior and all-powerful hero to beat all heroes other stories have made him out to be. He's taken to task for his back-stabbing, paranoid plans that are the cause of the dilemma presented in this story, although I think he was forgiven a little too easily by the other Justice League members, and was remorseless for his actions.

Thankfully Superman is presented as a strong, heroic, thoughtful and important member of the Justice League. He is obviously someone the rest of the team looks up to, and is shown to be revered by the people of Metropolis. Tim Daly does a superb job voicing Superman once again.

I was impressed at how the story managed to give the right amount of focus to all seven members of the Justice League. They all felt like real people to me. Cyborg was probably the least "realistic", but his role in the story is quite an important one.

I haven't read the "Tower of Babel" story since it came out in 2000, so I can't compare this story to the original comic book version in any great detail. I do know that the animated movie stays fairly true to the method used to take out Martian Manhunter, but all the other methods used in the comic book story are completely different to what was seen in the movie. Having said that however, the methods used in the movie were still quite ingenious. The section of the movie showing each character being taken down was both powerful and engrossing.

While Cyborg wasn't in the original story he does play an important part. Aquaman and Plastic Man are omitted from the movie version. The villain of the film is Vandal Savage, where the comic book villain was Ra's Al Ghul. Nevertheless, Savage and his Legion of Doom are interesting and menacing, and are all a good match for their Justice League counterparts.

Savage's plan is quite ambitious, and again different to what was done in the comic book story, but it is a threat that requires the abilities of most members of the Justice League for them to be successful in defeating him. The background story of Vandal Savage is also well integrated into the story.

I haven't had a chance to go through all the Bonus Material on the Blu-ray disc as yet, but I did check out the Sneak Peek preview of "Superman vs. The Elite", the next animated original movie set for release in a few month's time.

I've got to say that "Superman vs. The Elite" is one animated film I'm really looking forward to. I loved the original comic book story it's based on, and this sneak peek featurette has only heightened my anticipation. The character designs are quite different than what we've seen in other recent DCU animated movies. The style is a little rougher, less refined, which looks like it'll match nicely with the kind of story being told.

I've not yet heard who they've cast to voice Manchester Black, but whoever he is, he's perfect for the role. He kind of has that Liverpudlian accent with an air of arrogance and cheekiness blended in. George Newbern returns to voice Superman.

A digital comic book of the "Tower of Babel" story (Justice League of America #43) is included on the Blu-ray for anyone who wants to directly compare the comic book version to the animated movie.

Other featurettes (which I haven't yet watched) include "A Legion of One: The Dwayne McDuffie Story" which looks at the life and career of the late Dwayne McDuffie as told by his family and friends. "Guarding the Balance: Batman and the JLA" looks at what would happen if the Justice League went rogue and decided to use their power for harm.

I mentioned that Cyborg wasn't in the original comic book story, and Warner Bros. obviously felt they needed to justify his inclusion as there's a mini-featurette titled "Cyborg: His Time Has Come".

I'm looking forward to re-watching the movie with the creative team commentary turned on. I think it'll be interesting to hear some behind-the-scenes stories on the creation of the film.

I was quite impressed with "Justice League: Doom" and think it's another great entry in the series of original animated movies set in the DC Universe. I was impressed with the pacing, the development of all the characters, and the story itself was engaging and entertaining.

I'd give it a 4 out of 5 rating. It was nearly perfect in all respects, I just feel Batman was a little too easily let off the hook and, even though I'm not really a fan of the Bat, this movie did nothing to change that. If anything it confirmed my feelings on Batman by showing me what an arrogant and paranoid character he can be. Give me Superman any day.