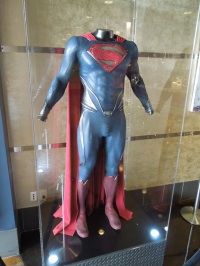 The Superman Homepage conducted an exclusive interview with "Man of Steel"ĘCostume DesignerĘMichael Wilkinson to discuss his work on the movie, and the design process behind creating the costumes for the film.

Q: Can you please tell us a little about yourself, your career, and what you've worked on?

A: I was born in Australia, and moved to the US almost 15 years ago. I've always been passionate about films, clothes and characters - so designing costumes for film was definitely the right fit. I've been lucky enough to work on a great variety of projects, with inspiring directors - futuristic ("Tron: Legacy", with Joe Kosinski), period ("American Hustle", with David O Russell), epic ("Noah", with Darren Aronofsky) and also contemporary ("Babel", with Alejandro Inarritu).

Q: How did you get involved with "Man of Steel"?

A: I had already had the pleasure of working on three projects with the amazing Zack Snyder - "300", "Watchmen" and "Sucker Punch". When he initially approached me to work on "Man of Steel", I was committed to another project, and so in the meantime Zack started up with the legendary Jim Acheson with the concept work and designs for the suit. It was great to then be able to come on board, continue the process and devote myself fully to the Man of Steel. 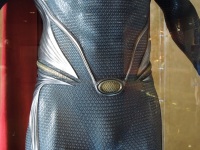 Q: Zack Snyder has said that he looked through literally hundreds of SupermanĘcostume designs, can you shed some light onto this for us?

A: There were indeed hundreds of iterations of the design, each with slightly different detailing - Jim worked with the illustrator Warren Manser, who filled up an entire external drive with endless files of Superman details and concepts! There was a determination to get it right, to design a Superman for the 21st century - so no idea was left unexplored.

Q: What was the process like when trying to come up with the designs for the film? Did you look through comic books, previous films and TV shows for inspiration or reference?

A: All of us working on the project did our homework very thoroughly and looked at all the variations of the Man of Steel's universe that had been presented in the last 75 years. I can't speak for Jim, but for the costumes that I designed my main influences were the Richard Donner movie, the Frank Miller graphic novels, and the beautiful illustrations of Alex Ross. However, for all the characters, we started from scratch, from the ground up, as it were, in order to stay fresh and to create costumes that suited the world that Zack and the writers had set up in our film. 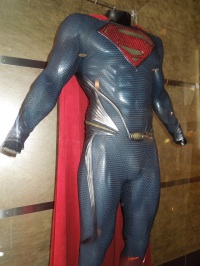 Q: Can you talk to us about the 3-layers we've heard about that make up the Superman costume? What material was used?

A: The first layer was a fitted body suit onto which some supplementary sculptural shapes were mounted, made of foam latex with a bright chromed finish. Then there was a thin mesh layer that was dimensionally printed with a chainmail-like pattern. Finally, additional foam latex details were applied - the "S" glyph, the cuffs, the side-waist trim etc. The total effect gave the suit a great sense of depth and an intriguing metallic sheen.

Q: In many promotional photos of Henry Cavill in the Superman costume (as seen on magazine covers and the like), the yellow in the "S" Shield on his chest is very muted or even black, can you explain to fans why that was the case?

A: There was a lot of experimentation with the colors of the suit Đ they read very differently under different lighting Đ outdoors vs. indoors, fluorescent vs. incandescent, day vs. night etc. For some reason the gold changed the most - perhaps because there was so much metallic pigment in the gold that it really reflected the colors and lighting around it.

Q: How difficult was it to settle on the exact hue of blues and reds that would be used for the Superman costume?

A: We wanted our film to have a realistic tone. Zack wanted the audience to wonder what it would be like if an alien entity had actually been discovered in our world. So the colors that were chosen were more suited our modern world - deeper and a little less saturated than earlier decades.

Q: You've been quoted as describing Krypton as having a "Neo-Medieval" backstory that influenced the costumes created for those characters. Can you talk us through the thought-process behind those designs?

A: Zack conceived Krypton as a planet that had flourished centuries ago, but was now in such deep decline that it was about to implode, through apathy, fear and conservatism. In this sense, it was a lot like the medieval Dark Ages, where the culture and learning of the Greeks and the Roman had been forgotten. And so the Kryptonian skin suit was created, whose texture echoed that of a medieval suit of chain mail. The clothes of the Kryptonians were designed to incorporate the "glyphs" on the chest - which is the equivalent of a family's coat of arms. Also there are capes and boots - all these factors helped explain why the Superman suit looked the way it did, and tied it into the culture from which it grew.

Q: Much has been made about the removal of the red trunks, and Zack Snyder has explained the thought process behind that decision, but fans want to know if there was any thought to including the "S" shield/glyph on the cape? 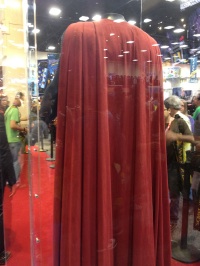 A: We did experiment with the idea of an "S" on the cape, but ultimately it was decided that it visually interrupted the dramatic flow and strength of the bold red cape. I think it also would have undermined the absolute singular strength of the chest glyph.

Q: Speaking of the cape, can you talk us through the decision on how long the cape should be?

A: We had different capes of different length, depending on the action , the terrain and the general desired look. The favorite became the longer one, which catches the wind as Superman walks and creates a dramatic, billowing silhouette. Sometimes Henry would be filmed with no cape at all, and it was then drawn in digitally in post production - this helped achieve the dramatic shapes and fast motion that you see in the final cut, and also helped Henry not to trip up...

Q: Once the design of the suit was settled on, how many copies were created? I imagine, as in previous films, there would have been costumes and capes created specifically for various scenes and requirements (i.e. walking, flying, fighting)?

A: There was a total of 14 suits built. Some of them had different fabrications due to the requirement of the script - there was a black+silver one for the Nightmare scene with Zod, and a couple with slightly less padding in the shoulders for the flying scene (so that Henry could stretch his arms into the iconic flying position). Mainly the multiples were created to deal with the wear-and-tear from the lengthy shoot and the complex stunt sequences. 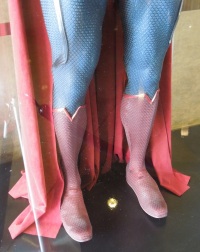 Q: What type of material was used to create the boots?

A: First, a custom-made sturdy leather boot was constructed, and then the sole of the mesh suit was attached directly to boot. The sole was designed on the computer, and printed out using a digital 3D printer. The shape was used to make a mold to produce the many soles required for all the suits. The soles were glued to the bottom of the boot, and served to really clamp things together.

Q: On Krypton, Jor-El appears to also wear the blue skin-tight suit that makes up Kal-El's costume, where other Kryptonians all appear to only wear black, was there any reason given to you for this difference?

A: Actually, there were many different colors of skin suit on Krypton - the Council Members had gold and purple tones, and Lara had earthy browns and greens. We loved the graphite/black color for the warriors - it worked well with their oily armor.

Q: Speaking of Jor-El, can you talk to us about the designs for the armor that he and other Kryptonians wear over the skin-tight uniforms?

A: The armor was designed using intricate bio-morphic shapes that reflected the alien forms of the animals and geography of Krypton - Jim and I worked closely with Alex McDowell the production designer, so that there was a seamlessness to our world. The armor has a spiky, jagged silhouette and intricately carved, sinuous lines. We liked the idea of creating a visual language that seems very alien and unfamiliar to us earthlings. 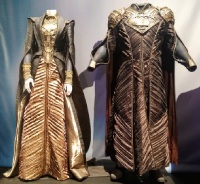 Q: Having watched the movie yourself, what did you think of the final product?

A: I was really proud of the film. The amazing thing about the Superman myth is that there are endless interpretations of the look of the story-variations that reflect different social periods in history, different formats - video games, TV, films, graphic novels, etc, etc. I think the costumes are a great fit for the world that the director and the writers created for the film.

Q: As a fellow Australian, congratulations on your involvement in "Man of Steel", and thank you for taking the time to answer our questions.

A: An absolute pleasure - proud to be Australian, and proud to be able to contribute to the legacy of the Man of Steel.

This interview is Copyright © 2013 by Steven Younis. It is not to be reproduced in part or as a whole without the express permission of the author. Images used with Allison Crowe's permission.