Helen Slater at the Super Megashow and Comicfest

If any comic book fans grew up in the 1970s and 1980s chances are they had crushes on Linda Carter's Wonder Woman, Carrie Fisher's Princess Leia, Yvonne Craig's Batgirl or crushes on any number of the women who played Catwoman in the Adam West "Batman" series.

However, there was room in everyone's heart for Helen Slater's Kara Zor-El, a.k.a. Supergirl.

In 1984, Slater donned the familiar "S" shield, red cape, mini-skirt and boots and at a July 12 and 13 comic book convention called the Super Megashow and Comicfest held at the Crowne Plaza hotel in-Fairfield, New Jersey, Slater talked about her time as the Girl of Steel and her subsequent visits into the "Superman" universe.

Born in Long Island, she graduated from the School of Fine Arts in New York City in 1982. The school was made famous in 1980s movie "Fame" which inspired a subsequent television show. She said it was here, she was able to study the craft. 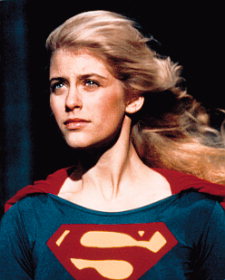 "Acting as a craft is so interesting to study, if you ever get a chance I would encourage anyone to do so," said Slater.

She and her "Supergirl" co-star, Peter O'Toole would discuss acting.

Slater said, "I remember being in Peter O'Toole's trailer and I had recently done 'Romeo and Juliet' and he wanted me to recite some of the play's soliloquies for him. Peter said to me, 'You Americans are so expressive, as you recite it pretend you are holding daffodils in your hand' and that is something I have learned that has helped me out in many, many ways."

She said this trick has given her more control in her performance.

And control was something she needed for the roll of Supergirl.

"There are two ways they made me fly," said Slater. "One was a leather harness that had ropes that hooked to my hips."

She explained that the ropes were attached to a heavy piece of construction and would have three to four men pulling her one direction to go up, another to go down and a different way to go back and fourth.

She added, "The second way was to film in front of a blue screen."

During the 2007/2008 season of the CW's "Smallville," Slater played the role of Clark Kent's Kryptonian mother, Lara-El. She said she was able to see up close how the creator's of "Smallville" make their characters fly.

"Now they do everything on computers," Slater commented.

She also spoke about meeting the "Smallville" incarnation of Supergirl, who is played by Laura Vandervoort.

"It was really a surreal moment," said Slater. "I remembered looking at Laura and wondering, 'Did I look that young?'"

While Slater discussed sharing the roll of Supergirl, one roll she was able to keep for herself was that of Billie Jean Davy in the 1985 hit, "The Legend of Billie Jean."

The story was based on St. Joan [of Arc] and the original script was written by Walter Bernstein, a writer who was black listed during the McCarthy Hearings of the 1950s," said Slater.

She said Billie Jean's story was the tale of a woman sticking up for the "little guy."

"I have girls come up to me and tell me that the movie meant so much to them that they were inspired to cut their hair," said Slater.

The conversation she had with fans at the convention jumped back to her "Smallville" stint.

When drawing that aspect, along with her playing Billie Jean Davy as a neo-religious icon, the comparison between religious allusions of Superman and Jesus Christ was brought up. Specifically, Tom Mankiewicz admitted, during the director's commentary of "Superman: The Movie," he played up Jor-El's role as God the Father and Superman's role as Jesus the Son.

Also Stephen Skelton's book "The Gospel According to the World's Greatest Super Hero," compared the themes of Jesus Christ, the Son of God, to the themes of Kal-El, the Last Son of Krypton.

Slater was asked if she approached playing Lara-El as if she was playing the Virgin Mary. "You know I never thought of it like that, but I can see how people have made the connection between the themes of Christ and Superman," said Slater.

And speaking of "Superman: the Movie," Slater discussed her connection with Christopher Reeve, who played the roll in the 1970s and 1980s. 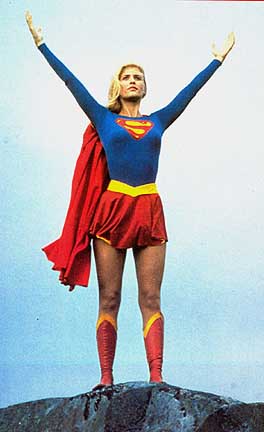 Slater confirmed that Reeve was supposed to make an appearance but for whatever reason, it fell through.

Though, she related one fascinating incident that the two shared.

"We were in New York City one time having lunch and we went for a walk in Central Park and we sat down on a bench," said Slater. "As we were talking we heard several sirens blaring from police cars and fire trucks pass by. Christopher leaned over and said, 'Here we are Superman and Supergirl sitting on the bench and we can't do anything for real to help'." Slater said that she stayed in touch with Reeve, and when he had his accident in the mid-1990s she wrote him.

"I never got to visit him," said Slater, adding how sorry she was Reeve suffered his accident. "I really believe he was a good man."

For now, the world of Superman seems to be behind her, however, she makes television appearances such as the one she made on a 1992 episode of "Seinfeld" entitled "The Good Samaritan." According to one IMDB.Com poster, in that episode, "Jerry trails a hit-and-run driver but is attracted to her and begins dating her; he later learns her victim [Slater] was a longtime quarry and dates the latter as well."

As an aside in typical "Seinfeld" fashion, it said, "Kramer begins having seizures whenever he hears Mary Hart's voice on 'Entertainment Tonight'."

And when Slater played the role, she played it uncredited.

"I did the episode because Jason Alexander is my friend and he was directing that particular episode. He asked me to be in it and I said yes," said Slater.

A fan asked if she and Seinfeld, discussed his love of Superman.

"You know, I had no idea Jerry Seinfeld was a Superman fan," Slater laughed.

Besides acting, Slater has been gaining fans with her music, a passion she said had for a number of years.

Her first CD, "One of these Days," came out in 2003, and her second one 2005's "Crossword" is on sale now. Her web site, HelenSlater.com, promotes where she will be performing next.

Also in her future, Slater said she looks forward to acting again, but in the meantime she is doing the convention circuit. She said meeting the fans has all been because of her role in "Supergirl."

When she tried out for the role, she explained she made a red cape and skirt so the movie creators could have a better feel for her and be able to see her easier in the role.

"I felt nervous because many of the other girls trying out for the role were not in costume," said Slater. "However, my best friend said to me 'Only obstacles strengthen our will'."

Slater credits this piece of advice for giving her the courage to persevere for the roll, which she won, and she admits using it as a theme for her life.

"It's not bad advice to give," Slater added. "Any obstacles we face, we can use them as tools to strengthen our perseverance to get what we want out of life."

This interview is Copyright © 2008 Steven Younis. It is not to be reproduced in part or as a whole without the express permission of the Superman Homepage.