In December 2011 series of images popped up on the internet that showed concept drawings of designs from Hasbro in relation with the never-made "Superman Lives", the never-made Tim Burton film that was set to star Nicolas Cage as Superman. The images had the watermark for "Ben Torres Design Inc.". Benjamin Torres was a senior designer at Hasbro Toy Group from June 1994 to December 2000 and directed the product design and development of concepts for "Superman Lives", working alongside fellow product designers Chris Samuels and Brian Eun to produce many Superman concept drawings for the never-made movie.

Ben kindly gave up time in his busy work schedule to talk to the Superman Homepage about these concept designs and his recollections of working on "Superman Lives", while also giving his thoughts on the upcoming "Man of Steel" movie.

Q: Can you tell us a little about yourself and what your exact involvement was with the "Superman Lives" project?

A: I've been a professional toy designer since 1994. My first job for Hasbro (at that time it was Kenner Toys in Cincinnati, OH) was Waterworld, Predator, Aliens and Batman Forever. I worked as a freelancer for a few months and they hired me on. I cut my teeth on the G.I. Joe relaunch in 1995, working on the toy line, TV show development and comic book development. I then worked on Star Wars then moonlighted for other teams on Batman, Superman, etc. I was part of a team that worked on toy, movie and TV projects simultaneously. This was to ensure that products seemed seamless and organic to the story. It was and still is a blast. Currently I'm designing everything from super hero toys to Christmas decorations to home decor items, working on a few movie projects as well. I have had a blessed and productive career and have worked with many great people in the industry.

Q: I understand that dozens (if not hundreds) of designs and concepts were put together for "Superman Lives"? How many do you think you personally worked on?

A: There were a lot of designs done by a lot of great in-house designers and freelancers. To be honest I can't remember how many designs I produced. When management gives you an assignment you just jam on it. I think I was on it for approximately 1 month. Star Wars was my main priority. I would say however that I may have produced 100 or more images. Usually after these kinds of projects where we would produce all these images, we would do an official presentation to whatever licensor or studio then the work got "filed" in our storage rooms. We then were on to our jobs of creating great toys. While there is definitely a cool factor in doing these kinds of things and it is necessary, the toy designers ultimate job is to produce design assets that reflect the core business, in this case cool toys. 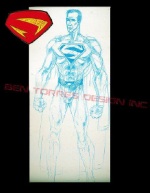 Q: You posted a number of images from your collection online. Looking at this first drawing which is attributed to you and appears to be Nicolas Cage in a fairly traditional-looking Superman costume (although with a belt design that actually brings to mind the Snitch from the "Harry Potter" movies), what can you tell us about this drawing and the "S" symbol that accompanies it?

A: Well for one I didn't do any of this particular artwork. My colleagues did this I just happened to find these on an old hard drive as I was going through various files. My good friend Chris Woods did this one. This image was to have been the more traditional looking suit Cage would have worn in the film. From what I remember elements of the Doomsday story line were being incorporated into the film.

You have to know that for various reasons legal and other wise all the information was not disclosed to us as designers we were given a kernel of the conceptual plot, plot, details, etc. From the information that was available to us we understood that Luthor and Brainiac (the super computer that ran Krypton version) were to team up to kill Superman. Luthor was going to manipulate the satellites to blot out the sun in the U.S. so that Doomsday would succeed. The end of the first act Superman would fight and defeat Doomsday but is mortally wounded in the process. Superman then gets thrashed by Doomsday, comes back in his black suit, then he dons his final "Son of Light" suit (Tim Burton's final design). I think you can see how the lights were to have been used on Youtube.

The movie was broken down into three separate acts with a different emphasis for Superman. The first suit was supposed to be a traditional Superman suit that was to incorporate alien technology that the audience had never seen before. The suit would slightly transform to reveal technology underneath that would conduct and distribute solar energy. Superman would be pushed to the limit in his battle with Doomsday. He would be on the verge of losing and then we would witness something that Superman would do that he had never done before. Since Superman is a "solar battery" and gains his power from the sun, he would have to expend all of his energy in one solar blast "sacrificing" himself in order to defeat Doomsday.

The first suit activates the alien technology that would allow him to channel all the solar energy in his body into one solar blast that essentially nukes downtown Metropolis. 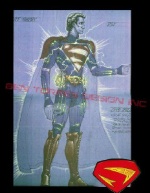 Q: You posted another of your own designs, a colored version of a costume which includes words such as "Suit Theory", "Cape Theory", and "Psy". The costume seems to be either radiating or absorbing sunlight. What's the story behind this design?

A: This suit speaks to the second act of the film. Since Luthor has blotted out the sun in the U.S. The recovery exoskeleton suit was designed to protect Superman's body and allows his body to recover since he didn't "die" in the traditional sense. The suit would also artificially reduplicate his powers. Superman desiring to continue to protect Metropolis then has to fight crime at night as his body recovers. This suit would eventually become the Eradicator armor. However the overall design emphasis was lights indicating a powered up and edgy Superman.

The third act of the film is, if memory serves, the final blackish and red suit that you see online. 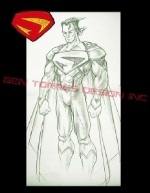 Q: It appears as though removing the red trunks was something that was even toyed with for designs in "Superman Lives". This next image (attributed to designer Brian Eun) shows Superman wearing a costume that also includes padded shoulders, pointed sleeves at the wrist, and teased-back hair. What can you tell us about the thoughts behind this design?

A: Brian, who is a phenomenal designer, was exploring various aspects of Krytponian design. From what I remember we were supposed to create thematic continuity between Kryptonian technologies and how that would be manifested and applied in film. There was a lot of talk about the use of light so this was just an application/exploration within those design parameters.

With regards to the lack of red underwear, eliminating them has been an on and off design priority for many many years even before this project... but after further reflection that's kind of what makes Superman cool. I mean who is really going to tell him to not wear his underwear on the outside of his trousers! [Laughs] But we had many different versions of Superman, some with his famous red trunks some without.

Q: The "Kryptonian Explorer" design concept (also by Brian Eun) shows what appears to be a Kryptonian transport or vehicle of some kind. Was this something that was included in the script for the movie or was it simply a toy design that was to be released as part of the merchandising for the movie?

A: I am not sure. If memory recalls correctly I think the design served a dual purpose. The purpose was to include technology that would be visually interesting on the screen and make for great toys. However the underlying idea was to emphasize the science fiction aspect of Superman. People forget that Superman is a science fiction character, he is from Krypton, he interfaces with technology, etc. so to explore these options seems to be natural. Since Superman had lost his powers in this particular version we wanted to explore the various aspects of Kryptonian technology.

Q: An image by designer Chris Samuels shows a blonde Superman in a blue and white costume. Were you aware of any instructions given to make Superman blonde?

A: Chris is a great designer and great creative. The blond hair was an experiment to provide various design options in exploring the Superman mythos. We were exploring things like does Superman show the physical effect of losing his powers when he dies? Would he have white hair, blonde hair, etc. the idea was to push the envelope creatively. Sometimes questions are asked to explore creative alternatives and possibilities. I do believe some of those designs were turned into toys and modified to the Superman animated line.

Q: Was there anything else about your time spent creating concept designs for "Superman Lives" that you'd like to share with us?

A: Superman: The Movie changed my life as a small child and the opportunity to work on this was an extreme honor. For this particular project I really appreciated the opportunity to push the character's design and push story elements that have not ever been explored. There were elements that seemed strange to me at the time (like Superman having a mask, during his recovery phase), but looking back on it now, it does make sense to explore those options. Having the opportunity to even try and add something unique to the Superman mythos is an extreme honor.

Q: What are your personal thoughts on the costume design for the up-coming "Man of Steel" movie?

A: I like the look and the alien feel to it. I especially like the use of the retro "S"... It's very cool. Secondly, Cavill is a great actor, and the guy brings a certain edge that Superman needs to keep him fresh. Christopher Reeve embodies Superman for me and Cavill is a worthy successor... plus the guy is ripped.

Q: Thank you for taking the time to answer our questions on "Superman Lives". Where can people check out your other work?

A: Your welcome and my apologies for taking this long to get back to you. My website is currently being redesigned but for now people can see my work at www.facebook.com/bentorresdesign and www.coroflot.com/torresbn.

Once again I would publicly like to thank Ben Torres for taking the time out to answer these questions, and for agreeing to do the interview.