If you're a huge fan of "Superman: The Movie" then you'll be familiar with the newspaper prop shown here. The headline on the mock Daily Planet newspaper cries "Caped Wonder Stuns City". It's the Daily Planet's front page story on Superman's debut after rescuing Lois from the crashed helicopter.

What many might not realize is that there's an actual story beneath that headline. That's the attention to detail that goes into making a movie. Thanks to John Kent (his real name), who owns one of the few copies of this prop, we can now present to you a transcript of that article.

What's interesting to note, is that this was written before the script was changed. Initially only the helicopter was to fall, but it was later decided to create a "double jeapordy" scenario where Lois fell, and then the helicopter fell. Also of note is Lois mentioning the Smallville train scene, where as a young child, she saw Clark Kent running alongside the train she was travelling in. This train scene never made the original theatrical cut of the film.

So here it is, the prop article beneath this famous Daily Planet headline... 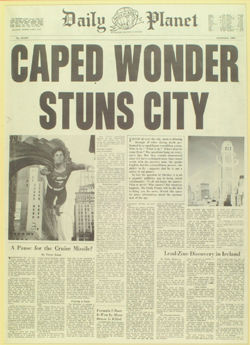 (The following is the main article, that runs almost the whole of the centre column of the paper)

New York's mysterious saviour, as yet unidentified, 'flew' into action last night, saving the passengers and crew of the airport helicopter from certain death.

As the pilot slumped unconscious in his seat and passengers were trapped by seatbelts, the 'copter which had inadvertently ensnarled itself round its launch struts, swung perilously half way over the edge of the building.

Women screamed, babies cried, strong men grew pale. One woman, our ace reporter Lois Lane, was aboard the 'copter. She tells the story of the terrifying moment when her past life flashed before her eyes and she knew death was at hand.

When I managed to unhook my seatbelt and scrambled over the unconscious body of the pilot in the vain hope of climbing out of the helicopter back on the roof. It was not to be. The force of gravity pulled me back, but I struggled up and pushed towards the door. As I finally managed to open the door and pull myself onto the roof the cable holding the helicopter snapped. The helicopter fell away, down, down, down. I hung onto the cable, a searing pain in my fingers, whether fear or an electric shock I cannot be sure. As I hung there I had the unmistakeable sensation of my past life swiftly passing before my eyes. I remember my childhood and the day when I was six and saw a boy run at an impossible speed beside the train in which I was travelling. My parents thought I was making it up, but I wasn't. It was true. Impossible as it may seem the boy then disappeared in a burst of speed, overtaking the train. I remember it vividly and the fact that it flashed across my mind as I hung in the air convinces me that it is true.

Then, with the memory of that boy still in my mind, suddenly I was scooped up by strong, enveloping arms. A man in a red cape, so strong, so powerful. He had me cradled in one arm and with the other he held the helicopter. It was incredible. he put me down so gently, smiled and told me he hoped the experience would not put me off flying. That statistically it was still the safest way to travel.

It is believed that later the same evening the caped man appeared again and guided the President's plane, Air Force One to safety as it battled against strong cross winds. The intervention of the caped man in Air Force One's landing was checked with the White House Press Office. "No comment," they said. Need we say more?

(The following part is in a box below the headline)

From all over the city, news is filtering through of other daring deeds performed by a caped figure resembling a man. Who is he? What is he? Where does he come from? The questions hang on everyone's lips. But they remain unanswered since few have exchanged more than casual words with the mystery man. He speaks English, but his extraordinary powers - the ability to fly - suggests that he is not a native of our planet.

In fact the question of whether it is all a gigantic publicity gag is being asked continuously. We do not know the answer. Man or myth? Who knows? But whatever happens, The Daily Planet will be the first to bring you the news. Watch this space for more information about the mystery man of the age.