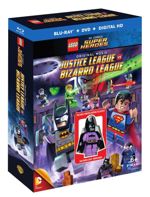 Children playing at a playground believe that they've sighted Superman, only it's Bizarro who's come to rescue them from nothing at all. Superman arrives on the scene, and is very much chagrined at the connection that is made: Bizarro being his brother. Superman coaxes Bizarro away from Earth, and finds another world for Bizarro to inhabit, setting up structures with incised faces to represent people. He leaves Bizarro for Earth and hopes all will be well.

However, sometime later, Bizarro leaves his world and breaks into Lexcorp. Bizarro seeks the device that created him, and with it, he creates Bizarro versions of the Justice League.

On Bizarro's world, Darkseid is mining the planet for the plentiful mineral that is found there. The Justice League arrives, looking to deal with Bizarro, only to find that they must now contend with Darkseid. After some mistrust and confusion, the respective Leagues are able to work together and defeat Darkseid. Bizarro saves Superman's life, by removing an intense amount of Kryptonite that Superman was exposed to, as well. Superman acknowledges Bizarro as a brother, and lets him know that he's welcome on Earth... within reason.

Review - 4: Don't let the synopsis steer you clear of the latest entry into the LEGO DC Universe franchise; there is plenty of story, despite the remarkably short length of the film, topping out at 44 minutes. It's a kid friendly film, something that DC should do more of, but it's laced with humour for adults, the big kids in the room. 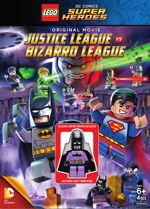 The vocal work here is pretty impressive, but that should be expected as the talent pooled ranges from working on Star Wars: The Clones Wars to the current Teen Titans series. Each character is voiced realistically for LEGO, i.e. Superman is the classic hero tone, Bizarro is a lovable dufus, and Batman is a paranoid jerk... well, maybe not Batman. A large part of the interplay is Batman's distrust of Superman. Batman's attitude towards Superman garnered questions before and after the screening, with the responses being hackneyed platitudes, but more on that below.

The LEGO film gives kids a gateway, and a safe one at that, into the wonderful world that is the DC Universe. Here, within Bizarro's League and the Justice League contending with each other, something is shown that is altogether lacking from the comics of the same characters: heroism. The readership of comic books is much older than it's ever been, and that may account for the dark, jaded, and cynical slant that too many books have undertaking, but, at the end of the day, the characters are still superheroes. Superheroes are supposed to lead by example, and yes, even adults need that example. Perhaps, it's needed now, more than ever, as there is a readership that seems content for Superman, Batman, Wonder Woman, etc., to be heroes in name only, while their names and outfits imply differently. There is something compelling about seeing the good guys win, but also with kindness, compassion, and the altruistic spirit that one would expect from a hero, let alone a superhero.

Justice League vs. Bizarro League is a worthy entry into the LEGO franchise for Batman and the DC Universe, but most of all, it's a gateway into the world of wonder that is the DC Universe, for the true new readers DC should be after: kids.

The only sticking point of the film was the tongue-in-cheek portrayal of Batman as a paranoid nut when it comes to Superman. The kids probably do not see the ramifications of 30 years in which Batman and Superman have been made to play against each other. In truth, Superman nearly dies in the film thanks to Batman's fear of Superman, and even after that close call, Batman is still unwilling to surrender his stash of Kryptonite. When the film was over, it was asked why Batman behaved in such a manner, and the responses were typical: "Superman's a boyscout." "Batman's a little jealous of Superman." What some young people probably note is that Batman acts like a supervillain in regards to Superman. He seeks Superman's weakness, plots against him, and doesn't trust him for reasons that make Batman look like a mental jerk. It's all taken in for laughs, yes; however, I do hope the questioning continues. Eventually, those being questioned will have to answer honestly, and hopefully that will be before a generation (that has no recollection of "The Dark Knight Returns" or any nurtured love for it) places their quid and attention even further away from comic books.