Things you may not have known about the Earth-Prime Superboy 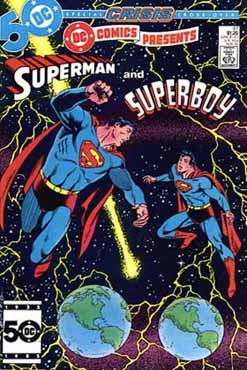 Had the Superboy character - that of the young Superman vis a vis Conner Kent - had a pre-Superman career in the John Byrne revised Superman universe of "Man of Steel", he might have been much like Superboy-Prime, the kid of steel who's allied himself with Alexander Luthor in "Infinite Crisis".

Superboy-Prime didn't make the journey from Krypton to Earth in a rocket. Jor-El of Krypton-Prime teleported the baby to Earth moments before Krypton's destruction.

The Science Council of Krypton-Prime believed Jor-El that Krypton was doomed. However, where Jor-El insisted on action, the Council insisted that committees be formed and that feasibility studies be performed. Bureaucracy - not disbelief - doomed Krypton-Prime.

Baby Kal-El wasn't the only survivor of Krypton-Prime. Shortly before teleporting baby Kal-El, Jor-El tested the teleporter by sending a Kryptonian animal called a grundoon to Earth.

As Krypton-Prime began to die, Jor-El teleported baby Kal-El and planned to send Lara next and finally himself.

Immediately after Jor-El dispatches their infant son, Councilor Durkin of the Science Council bursts into Jor-El's chambers and leaps into the teleporter. To date, it's not known if Councilor Durkin actually made it to Earth. What is known is that his interruption prevented Jor-El and Lara from following their son to Earth before Krypton-Prime died.

Forget Smallville. Forget Kansas. While hiking in the woods in New England, Naomi Clarke Kent and Jerome Thornton Kent find what they assume is simply an abandoned child. There's no rocket and the child is seemingly normal so these Kents have no reason to suspect this is anything but a poor abandoned human baby.

These Kents weren't farmers. Naomi was a lawyer and husband Jerry was in computers. They were the modern super-family of the yuppified 1980's and in fact Jerry's career appeared to lend itself toward his being the more present parent in the young child's life particularly after Naomi returned to practicing law.

Unlike Jonathan and Martha Kent, Jerry and Naomi had no idea they'd adopted a super baby. Living in a world where Superman existed only as a comic book character created by two youngsters from Cleveland in the 1930's, the decision to saddle the little boy found with the name "Clark Kent" struck Jerry as cruel, but Naomi insisted on using the family name.

Though Superboy-Prime pre-dated the "Man of Steel" reboot by about two years, the Earth-Prime Boy of Steel differed significantly from his Earth-One and Earth-Two counterparts in a very significant way - his powers didn't manifest themselves at all until he was in his teens just like the re-imagined Superman origin in John Byrne's "Man of Steel".

In Superboy-Prime's origin story, the solar flares and strange atmospheric conditions of the coming Crisis were posited as the reason for the sudden flare-up in Clark-Prime's super powers all at once. But it doesn't explain why a Kryptonian in any pre-Crisis universe wouldn't have slowly developed some noticeable powers as he grew up. Nor does it explain why, later in the story, Superboy-Prime is completely unaffected by red solar radiation.

The night that Superboy-Prime discovers his super powers and meets the Earth-One Superman, he just so happens to be dressed in a home-made Superboy costume for a costume party. His girlfriend, Laurie Lemmon, is dressed as "Lori the Mermaid".

Superboy-Prime decides to accompany the Earth-One Superman back to Earth One so that he can help figure out what is causing the strange atmospheric conditions afflicting all the multiple Earths. Before leaving Earth-Prime for the last time, he reveals his abilities to his parents and his girlfriend, and promises to return. He doesn't.

In one night, Clark-Prime discovers he's not from Earth, he's Kryptonian and thus really is a Superboy like his namesake, meets the Superman he'd always believed was just a fictional character, and says goodbye to his parents, his girlfriend, and his entire planet forever. It's only days later he's forced to decide to spend eternity in a Limbo dimension with two really old people and the Carrot-Top of Earth-Three. It's no wonder that Superboy-Prime has seemingly gone rogue, or at least appears to have his own agenda.

Then again, there's another possibility. Councilor Durkin of Krypton-Prime teleported off Krypton immediately after Jor-El sent the baby Kal-El. But Durkin's never seen again. What if Councilor Durkin made it to Earth-Prime, but only in spirit? Perhaps Durkin's consciousness infused itself into the mind of the Last Son of Krypton-Prime? That could mean Superboy-Prime may not yet be the traitor he's shaping up to be over in "Infinite Crisis".