Superman and Wonder Woman - A Visual History of Romance

When it comes to Superman and relationships, most people automatically think "Lois and Clark". From the very first issue of "Action Comics" way back in 1938, Lois Lane has been a love interest for Clark Kent/Superman. Lois even had her own comic book titled "Superman's Girl Friend, Lois Lane".

But Lois hasn't always been the only woman Superman or Clark Kent has been romantically involved with. The most obvious inclusions are Lana Lang and Lori Lemaris. While long-time fans will list others including Lyla Lerrol, Sally Selwyn, Lyrica Lloyd, Luma Lynai, Cat Grant, and Maxima (just to name a few).

Then there's Wonder Woman. With the 2012 announcement that Superman and Wonder Woman would become romantically involved from issue #12 of "Justice League" (on sale August 29, 2012), I thought I'd look back at previous pairings of this super couple throughout various comic book incarnations.

Superman and Wonder Woman announce their engaged to be married, and are seen kissing and declaring their love for one another in the story "Wonder Woman: Mrs. Superman" from "Superman's Girl Friend, Lois Lane #136" (February 1974). But it was all a ploy to save Lois from the Revenger.

In a story titled "The Super-Prisoners of Love" from "DC Comics Presents #32 (April 1981), when the god Eros is rejected by Wonder Woman he makes her and Superman fall in love with each.
In "Wonder Woman #300" (February 1983), in a story titled "Beautiful Dreamer, Death Unto thee!", Wonder Woman dreams (amongst other things) about what her life would have been like if she'd married Superman.

In the famous story "For the Man Who Has Everything" written by Allan Moore and Dave Gibbons (published in "Superman Annual #11 in 1985), Wonder Woman gives Superman a kiss for his birthday. With Superman wondering why the two of them don't kiss more often. 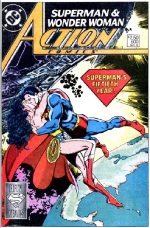 Superman put a kiss on Wonder Woman in "Action Comics #600" (May 1988) in a story titled "Different Worlds", catching Wonder Woman off guard. Superman awkwardly admits to having thought about Diana constantly since first meeting her, even admitting to having had an "intense" dream about her. While Wonder Woman admits to also having feelings for Superman, the two agree to remain friends to give Wonder Woman more time to settle in to "man's world".

With Lois Lane having been dead for many years, Superman and Wonder Woman get together in the four-issue mini-series "Kingdom Come" (May-August 1996), with the pair sharing a kiss as she hands him a pair of glasses before returning to Paradise Island. In the follow-up series titled "The Kingdom", Wonder Woman gives birth to Superman's son.

1998 saw the publication of an Elseworlds graphic novel titled "Distant Fires" in which civilization is destroyed by nuclear war, and Clark Kent is forced to live a life of solitude, having buried his friends in Metropolis. Years later Superman and Wonder Woman discover one another, becoming close, and eventually falling in love. The two are later married and have a child together.

In the 2001-2002 "The Dark Knight Strikes Again" by Frank Miller, Superman and Wonder Woman have a daughter (called Lara).

The 2003 Elseworlds 3-issue mini-series "Superman: Red Son" saw Wonder Woman enamored of Superman, but he only considered her as a comrade, and was mostly oblivious to her love for him.
In 2003's "DC: The New Frontier" written and drawn by Darwyn Cooke, Superman kisses Wonder Woman as she lies, dying in his arms [pictured above].

Frank Miller also had the two characters share a passionate kiss in issue #5 of "All Star Batman & Robin the Boy Wonder" (July 2007). Superman wants to arrest Batman while Wonder Woman wants to kill him. It's implied the two have romantic feelings for one another, but the issue over what to do with Batman leads to a heated argument... which ends in a kiss.

The late Mike Wieringo must have been a fan of Superman and Wonder Woman being romantically involved, drawing this wonderful piece of art (inked by Richard Case) showing the two in a mid-air embrace [pictured above].

The pairing of Superman and Wonder Woman was even the subject of a series of greeting cards for birthdays and valentine's day.

I also found a photo of an unlicensed pin (made in China) that was sold on Ebay showing the two embracing.

Whatever your feelings about Superman and Wonder Woman being romantically involved, the story of this new relationship has garnered much publicity. How long it lasts is anyone's guess. How Lois Lane will feel about it remains to be seen. I hear people are already taking bets on how long until we see this happen... 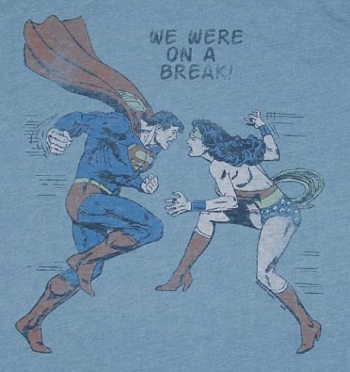