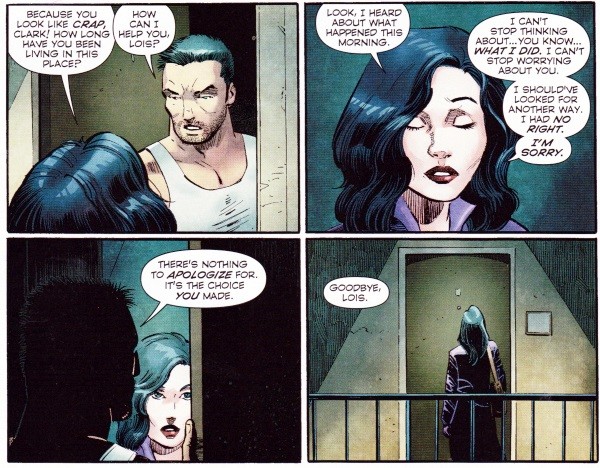 By T.A. Ewart (aka liheibao)

The New 52 was a desperate ploy undertaken by DC Comics to invigorate new interest in the DC Universe. This was a universe predicated on a superlative hero, ahead of his time, who cut a swath that all other heroes follow still to this day. Equally important to the foundation was the intrepid reporter who was ahead of her era, the woman of tomorrow, Lois Lane. Where other love interests fell by the wayside, Lois Lane persevered. She, much like her counterpart, flexed with the flux of time and social thought, but her core was resolute, and through adventures both silly and sublime, she remained a singular character embodying both prescience and present-day populism. She could never be forgotten or ignored, domesticated or dumbed-down, because of what she was and who she was connected to. Few characters can claim the importance of Lois Lane: friend, rival, colleague, compatriot, confidant, companion, lover, wife. Remove Lois, and you not only decimate much of what Superman is about, but you also undermine what the DC Universe is about... or, at least, what it used to be about. It was a universe of grand ideas, and even grander people that implemented them. Recently, with the decision to have Lois Lane out Clark Kent as Superman, one has to wonder what has become of those ideas, why DC has allowed Lois Lane to bear the brunt of what is increasingly becoming a failed gambit on their part.

This would not be the first time that Lois has learned that Clark Kent is Superman. No, this would not be the second or third either. It is the first time that she sees fit to expose his secret, and though her justification is still forthcoming, it smacks of another character, a doppelgänger, but not Lois Lane. Lois' reaction to the discovery has been varied. She's been surprised, elated, livid, and saddened, but the mitigating factor in each occurrence was that she genuinely cared for Clark Kent. The argument could and will be made for journalistic integrity, but if Lois Lane, a symbol of the aforesaid principle decides not to run a story, one would think that should be enough. A deeper dive, which most Superman readers know, is that Clark is Superman's connection to humanity. It is through Clark that Superman is allowed to normalize himself and interact on a human level; to be one of us as much a Kryptonian can be. When that is stripped from him, Superman loses that human component that is necessary for his character. However, it's obvious that DC knows this, and the action is another attempt to move the needle of reader interest, with Lois Lane selected to do the dirty work.

Since the inception of the New 52, we've seen Superman in a new outfit, his parents were murdered, he's left the Daily Planet, and been paired with Wonder Woman, all in an attempt to move the needle. Lois has fared just as poorly, if not worse, being switched from reporter to TV producer, infected with Brainiac for over a year, resulting in her being comatose or demonic for most stories, and unceremoniously given Jonathan Carroll as a love interest, who's current existence is questionable. All done to shake things up, generate interest, and at inestimable cost to characters who have been inextricably linked from the onset of their creation. The damage done to one is immediately reciprocated to the other, but this is the banality that Superman and Lois Lane have been foisted upon. Superman is a depowered symbol of what he once was, and Lois Lane has been made into a plot device to send him along his merry way.

The idea, at least among comic readers, is that somehow, regardless of the offense, there is some mitigating factor, and with that, a chance at redemption. The aforementioned is a Silver Age notion, a notion that has been repeatedly crushed in the demand for stories of permanence and gravitas. The Silver Age notion was one of hope, and that doesn't exist in the New 52, just ask the Blue Lanterns. To think that Lois can redeem herself of such a betrayal both undermines the story idea, for what need is there for redemption, if the act was right, but also displays DC's thought process towards readers i.e. we do not need to commit to crafting solid stories, as the readership will forget it when we reboot. Still, it sets a horrible precedent on an otherwise unblemished character in relation to her history and interaction with her counterpart. A precedent that will surely be tapped when a writer wants Lois to act uncharacteristic of her nature, much as it has been done to justify the same with Superman. The worst of it is seeing Lois Lane, the woman of today and tomorrow, used to bring angst to a man's story, in the trite manner that Superman and Lois Lane's relationship is so very much above.

The need to move the needle is one that I understand. Anyone who's done so much as posted a YouTube video comprehends the whys and wherefores in making decisions towards the interest of the audience. The aforesaid doesn't excuse a poor decision, and this is a magnificently poor determination. Superman and Lois Lane are the Adam and Eve of the DC Universe. They were the most positive relation in comics between a man and woman, which, unfortunately, is still something ahead of its time. No bickering, bile, or bullying, but a commitment of heart, mutual respect and admiration, reason, and love. There is little of that in the comics world today, and this drags them both into the miasmatic film of what is called development for today. That development will see Superman looking nothing like himself, riding on a motorbike of all things, and about as hopeful as Crom, but Lois? If DC has shown anything with the New 52, it's that they have no idea what to do with Superman, and even less with Lois Lane.