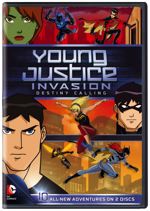 Join Young Justice and watch them battle villains and fight crime in a 2-disc 10 episode collection!

For the Young Justice squad being a teenager means proving yourself over and over - to peers, parents, teachers, mentors and, ultimately, to yourself. But what if you're not just a normal teenager? What if you're a teenage super hero? How much harder will it be to prove yourself in a world of super powers, super villains and super secrets? Are you ready to come of age in such a world? Are you ready for life or death rites of passage? Are you ready to join the ranks of the great heroes and prove you're worthy of the Justice League? That's exactly what the members of Young Justice - Robin, Aqualad, Kid Flash, Superboy, Miss Martian and Artemis - will find out ... whether they have what it takes to be a proven hero.

The latest season of the critically acclaimed series jumps ahead in time 5 years to re-introduce the original squad as well as all new members Nightwing, Wonder Girl, Blue Beetle, Batgirl, and Beast Boy as they fight off a secret alien invasion affecting the entire planet. 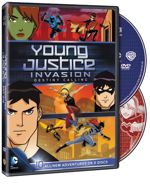 This 2-disc set includes the first 10 episodes of the second season of the animated series: Happy New Year!, Earthlings, Alienated, Salvage, Beneath, Bloodlines, Depths, Satisfaction, Darkest, and Before The Dawn.

I won't review the episodes in this DVD collection, as they have been well reviewed already on this website.

This new "Young Justice" release features two discs, a blue Disc 1 featuring an image of Blue Beetle, while Disc 2 is red and features an image of Wonder Girl. The binary code background on both discs can make it difficult to read the small writing letting you know which is Disc 1 and which is Disc 2. There are five episodes per disc.

Inserting Disc 1 launches automatically into a couple of preview trailers for other DVD releases. The first is for the upcoming "LEGO Batman: The Movie - DC Superheroes Unite" animated movie.

Special Features on Disc 1 are limited to three episodes from "Batman: The Brave and The Bold": "Rise of the Blue Beetle!", "Fall of the Blue Beetle!", and "Revenge of the Reach!". There's also and additional trailer for other DC Nation offerings and the DC Heroes trailer drawing attention to the "We Can Be Heroes" fundraising effort for the Horn of Africa. 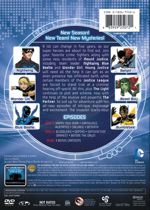 Disc 2 launches directly to the Main Menu. There are no extras or bonus material items on Disc 2.

With episode 12 of Season 2 having only just aired on Cartoon Network at the time of this review, a complete season DVD collection is a long way off (assuming one is coming at all), so this DVD offering is probably something fans of the "Young Justice" animated series will want to pick up now.

You can grab "Young Justice: Invasion - Destiny Calling: Season 2, Part 1" on DVD from our Online Store.

Below are four video clips posted by Warner Home Video promoting this release.