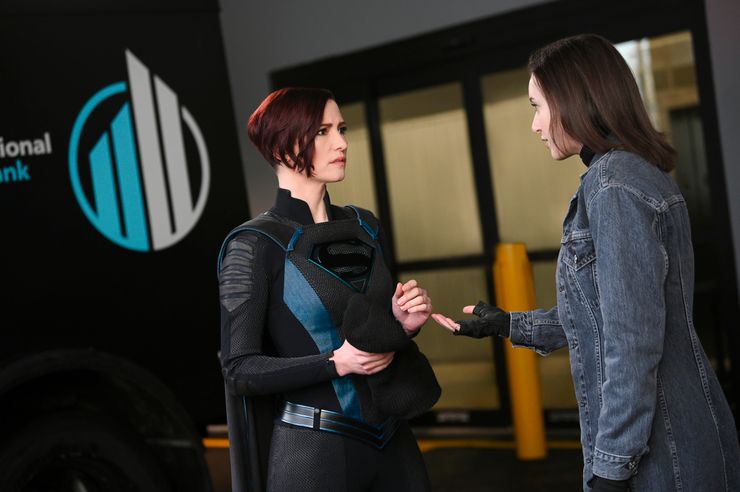 Rating - 4 (out of 5): This episode impressed me on many levels. The writing was very strong, and it took several of the issues and the themes that this season has sometimes done a ham-fisted job at exploring and dealt with them in a mature and engaging way. It also gave Alex and Kelly a lot to do and showed a deeper side of their relationship. There were also some laugh out loud moments, especially when it came to Harewood and Rath hamming it up in the virtual world.

At the risk of oversimplifying two very complex subjects; relationships and grief are both incredibly weird. Because the show is mainly about Kara, we rarely get to deal with Alex as a person and not a supporting character for the lead. The writers have developed an amazing relationship between Kara and Alex as sisters, but we don’t see a lot of the tension that most families have. That’s not a bad thing. Unnecessary and forced drama is rarely good, so seeing a healthy and loving familial relationship is great, but, every once in a while, it’s nice to see that there are cracks in those walls.

In the backstory of the show, Jeremiah Danvers is an odd duck. The stunt casting of Dean Cain was nice and the idea that he died saving J’onn made him a heroic figure. When they brought him back with a cybernetic upgrade it made for an interesting conflict. While it was rare, the subject of how Kara coming into the family effected Alex would be explored and the opening scene with Alex having a well deserved break down showed that while Alex loves Kara and thinks of her as a sister, this wasn’t an automatic feeling. Jeremiah and Eliza put a lot of responsibility on a teenage girl and that could be seen as being unfair. Not only do you have a new sister, but she has super-powers and is related to Superman and you need to look out for her. Combine that with how things went with Jeremiah in the second season and you have the recipe for what happened to Alex.

Grief is complicated. The Kubler-Ross/Kessler Five Stages of Grief make it seem like there are these five stages of grief that you go through one after the other and then come on the other side healthier. That’s not how life or emotions work. The five stages are not a road map. They are there to give some structure to something amorphous, but it isn’t a straight line. You can be in denial and then angry and then in denial again and you can reach acceptance, but something happens, and you are right back at depression. I appreciated that the writers not only showed that Alex’s feelings about her father were complex, but that her family and friends let her have some space to work through it and understood her behavior was understandable.

Using the Obsidian lenses as a coping mechanism was very on point. Replace VR with going to a bar every night and drinking or playing video games or binging seasons of a television series and the idea is the same. Escape. You are trying to lose yourself to deal with your pain because sometimes you have to walk away from it, or it will consume you. The fact that this dovetailed nicely into the season long plot was clever and allowed this episode to not only advance the story but also have some fun with Alex as Supergirl.

And those scenes were fun. David Harewood was chewing the scenery for most of his scenes and it was just delightful. I also liked how he fell back into hard ass J’onn for the DEO scenes. Jesse Rath dialed up his old Brainy performance to eleven and, again, the result was a goofy set of scenes that showed the range of the actors.

Alex and Kelly’s conversation towards the end of the episode also did my heart good. It was very real and reminded me of some of the conversations I’ve had with my wife when things are bad. Then it went right back into the plot and we got to see William doing some investigative reporting and it’s always good to see Helen Slater on the show. The funeral was genuinely emotional and made for a good ending to the episode.

This was the strongest episode of the season from an emotional standpoint. I’m glad the show turned the corner.