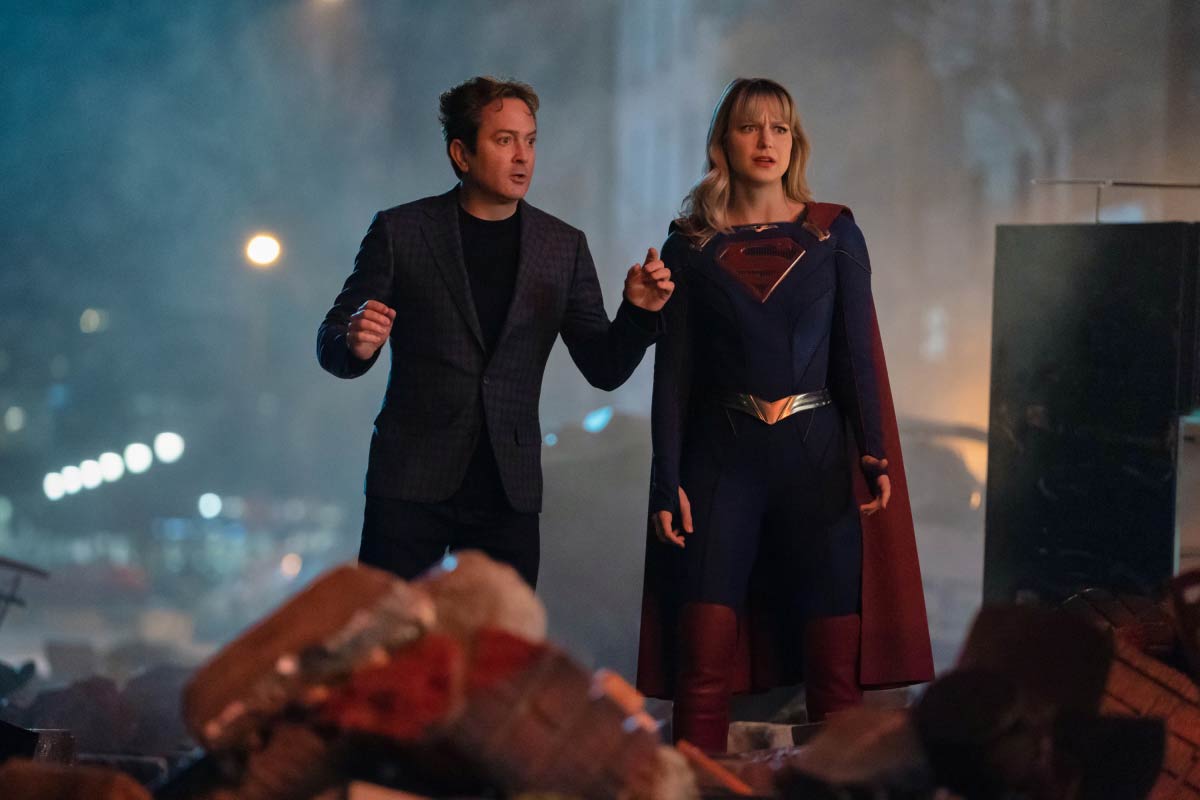 Rating - 4 (out of 5): The main reason this episode gets a four instead of a five was the wig Melissa Benoist wore in the flashbacks. I realize it's a silly thing to get hung up on, but it looked really obvious to me. In places it was distracting.

Other than that, this was a great episode and fine way to celebrate one hundred episodes. It's nice to be writing about the centennial episode because, after season one, there seemed to be some concern over the series surviving. There have been some bumps in the road, but this show has been something special and is, more often than not, a lot of fun to watch.

The story in this week's episode not only provided a neat way to celebrate one hundred episodes, it also served to solve a serious problem I've had with the fallout from Lena learning that Kara is Supergirl. I felt that Kara was blaming herself a little too much and that Lena wasn't taking responsibility for the sneaky and sometimes deadly things she's done. By having Kara go through the various scenarios with Mxy, she came to terms with what she did and why she did it. I appreciated that. It's not like Kara was trying to duck her culpability in lying to Lena, but the scene where Mon-El tells her that she didn't lie to hurt Lena, but protect her led me to shout, "Thank you!" at the television. The ending, where Kara tells Lena that she accepts responsibility for what she did but now the ball is in Lena's court, was just what I wanted as a resolution.

Mxy was a lot of fun in this episode. The writing for him was strong and the performance rose to the occasion. It's funny to see a contrite Mxyzptlk and he seemed to be legitimately trying to atone for his previous appearance. I liked that they poked fun at the season 2 episode he first appeared in but didn't go overboard with the snark. The different gags the writers gave him landed every time and I liked the chemistry between Melissa and Lennon.

The different scenarios played out nicely and ultimately served to show why Kara telling Lena when she did was the best possible outcome. The device of Kara and Mxy watching the scenarios on television was clever and the fact that they name checked Betamax as a format was shocking. Seeing the characters from previous seasons return was yet another good move for an anniversary episode. Sam Witwer, in particular, seemed to be having a ball hamming it up for the return of Ben Lockwood and it was a legit surprise to see Chad Lowe's character return.

All in all, this was a very enjoyable episode with a very questionable wig. I am so happy that Supergirl made it to its 100th episode and it makes me even happier that the show is going to a sixth season. It hasn't always been a smooth ride, but this show has given us an inspirational version of Supergirl that unlike most of her comic book incarnations in the 21st Century that seem to exist mainly to be angry (outside of the wonderful Sterling Gates/Jamal Igle run) this Kara has been a symbol of hope and love, even when she has fought against her doubts and setbacks. The supporting cast continues to be great and I am just so happy that this show exists.