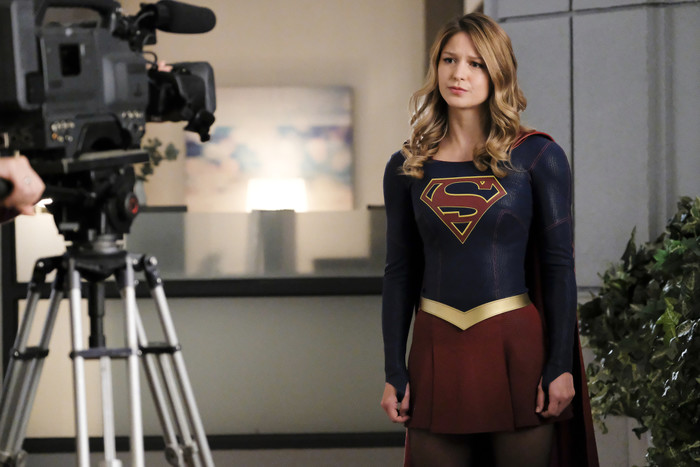 Rating - 4 (out of 5): We left last episode with the President being revealed as a Durlan. We open with Supergirl and President Marsden discussing the President's resignation with a swarm of protesters outside the White House. A riot ensues and Supergirl, flagpole in hand, puts a stop to it. This is of course an iconic image. How many covers, posters, etc... have we seen of Superman in this pose or with the flag flying in the background? I like it and it looks great here! So far when it comes to Supergirl (and for that matter Superman) humanity still seems to respect them despite all the anti-alien sentiment. That may soon change but the rioters seemed to listen to Supergirl for the time being.

I find the character Otis to be annoying. He's obnoxious and arrogant, which I'm sure we expect in a villain, but this guy's too much for my taste. And for that matter his sister Mercy is worse... or maybe that's more a comment on Rhona Mitra's portrayal. Yes, she makes Mercy unlikable but with the scene-chewing the actress comes off more unlikable! I'm starting to roll my eyes whenever she enters a scene. Her attack on L-Corp was predictable as was her takedown by Lena using Lex's dismantled suit. Don't get me wrong the L-Corp scenes were fun, especially Kara trying to slip away to become Supergirl. While we've had some moments of this before this scene really reminded me of the many times (whether in TV or film or you name the comic) when Clark was in the same predicament. But like Clark, Kara still managed to help (by a super sneeze or some other way) halt the bad guys in her civilian identity. And let's give a hand to Miss Teschmacher for her quick ingenuity as well.

Brainy had a nice moment with Nia at the Pizza Restaurant after his identity was exposed. I loved her verbal takedown of the restaurant owner and her brief but flirtatious conversation with Brainy who seems to suspect that he's seen her before. The fact that she's playing a character that's based on a Legion of Superheroes character probably has something to do with it. We'll see where this goes. Nia also had a great moment with James describing what happened at the restaurant and telling him as a trans gendered woman she can empathize with feeling like an outsider like the aliens must feel. I'm glad her talk with James encouraged him to take a bigger stand on the anti-alien movement.

I have to say I'm really enjoying Jesse Rath as Brainy. He can be very formal and funny at the same time. It's taking him a while to adjust to the twenty first century but with the help of Alex and the rest of our heroes he should do just fine.

Agent Jensen's seduction and turnabout by Mercy happened too fast. Whatever his deep feelings may be about aliens he went from supporting Director Danvers to siding with Mercy and Otis in a matter of minutes. Convenient he was there to help the two of them escape. I suppose there was a brief homage to Superman II when we see a hologram of Mercy and Otis still in their cell like Lex and Otis in that film. But how often are we going to see the old looped video disguising a criminals get away? The DEO should have known at that point that they had escaped.

The scene with J'onn at Agent Liberty's rally was a bit frightening when you consider that these types of gatherings of hate groups do exist in our world. The whole anti-alien scenario is of course an allegory for what's happening in our current society and whatever fence you're on I still applaud this series for trying to come to terms with what's happening here. Hopefully it will open the eyes of some characters and maybe a few viewers.

Well, kryptonite is never far and Mercy setting it off into the air mimics Otis' rant earlier about the lead that was sent into the air to stop the Daxamites. I think we know Kara will come through it okay but it was a good way to end the episode.

All around this was an enjoyable episode. It was fun but it also showed the darkness of the anti-alien movement. You don't know who your true friends are, whether they're alien, human or humans with an agenda. I've enjoyed these past two episodes. Flawed they may be but they are setting up the story for at least the first half of season four and hopefully there are more secrets to be revealed.