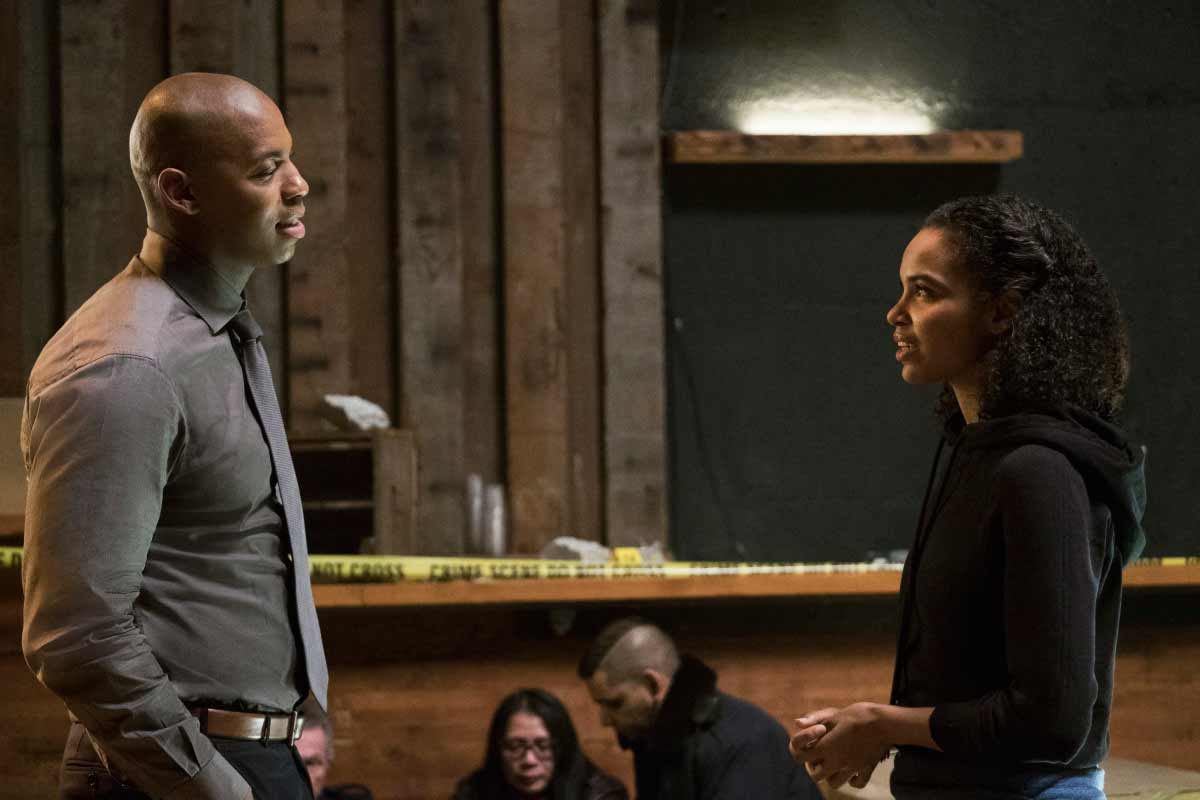 Rating - 3 (out of 5): We start with more distrust between Supergirl and Lena. The team is at Lena's lab observing Sam in her safe room when Reign threatens. Lena hits a switch and the field protecting Reign turns to static so Sam/Reign cannot see out and the team cannot see in. When Supergirl tries to use her x-ray vision to try see through the static, she learns that Lena has built it so it shields Kryptonians. This does not sit well with Supergirl.

Kara goes to see James to tell of Lena's latest "betrayal" when Tanya a former acolyte of Thomas Coville's cult rushes in with the book that the cult has been using. She warns that the cult members are planning something big. Tanya is kidnapped by the cult after they infiltrate CatCo. They do this a little too easily but the plot must move forward quickly so make of that what you want. This sets James in motion and Guardian emerges. Secret closet in his private elevator? Okay. Guardian finds Tanya and while fighting some acolytes his mask is shot off and his face is revealed. The cops run in but instead of going after the cult members they want to arrest the unmasked Guardian. Guardian using a smoke bomb escapes.

This brings up some issues. The show has not dealt with James as a black hero. It was time to get more personal with James and how he's dealt with being a black man in America. James' conversation with Lena was heartbreaking. We got some insight into James' life which was a nice moment. James has been criticized for his character just being in the background these past seasons, but not only has he been given a more prominent role and an interesting relationship with Lena, he has stepped up as Guardian. This episode he teased with the idea of revealing to National City (the world?) that he's Guardian - a black hero. Ultimately he decided not to but this episode did a pretty good job dealing with this subject and got a wonderful scene with Mehcad Brooks.

Supergirl and Mon-El investigate a cult hideout finding the burned remnants of a former acolyte including a necklace. Using residue from the body they learn they are using a rock (found in Addis Ababa!) that has a connection with Krypton. The cult is trying to create their own Worldkiller.

Meanwhile back at Alex's, Ruby is brooding over the situation with her mother and wondering if she may become like her. Alex admits she doesn't know but that they will do all they can to help her mom. This leads to an outing with J'onn and M'yrnn at the arcade. After M'yrnn has a flashback episode in the middle of the noisy arcade Ruby comes to sit with him bringing M'yrnn back to himself. After discussing Mars and M'yrnn's faith, getting him through the worst, a foosball rolls by leading Ruby and M'yrnn to play the game which helps them each out of their slump.

The cult threatens to reveal James as Guardian unless they hand over Tanya. This leads the team to follow Tanya who is taken away in a van but not before a bespectacled Mon-El jumps in pretending to be a guy in the wrong place at the wrong time. Once there Olivia, a young acolyte that Supergirl had tried to help, is performing the ritual that will make her a Worldkiller by using the Kryptonian rock. After Mon-El reveals his identity and knocks out one of the members he takes a sun stone which alerts Supergirl to their whereabouts. Olivia is already becoming the Worldkiller when Supergirl and Guardian arrive. While fighting Olivia Supergirl attempts to take the rock from her hand but it affects her making her heat vision go out of control. After recovering Supergirl is able to talk down Olivia but it may be too late. Olivia cannot remove the rock from her hand. After assistance from Mon-El and a painful use of Supergirl's heat vision they retrieve the rock. Later Winn discovers another piece of the rock floating in space around a meteor. Supergirl and Mon-El take J'onn 's car/ship into space to retrieve the rock giving the two some time to discuss their relationship. A man walks in on the crime scene left behind by the cult, where he is stopped by a policeman. The man turns and we see Thomas Coville is alive.

This episode dealt nicely with themes of trust, race, and coming to terms with loss. While there was some superhero action it was the character scenes that made the episode. Mehcad Brooks, Carl Lumbly, and Chyler Leigh shined well here. Of course this episode, more than last episode, was really a transition into the next story arc. While it was enjoyable I just wish many of the storylines that began at the beginning of this season would be resolved. They're getting there but there's only a few episodes left and I would like to see some resolution. Still, a solid episode.