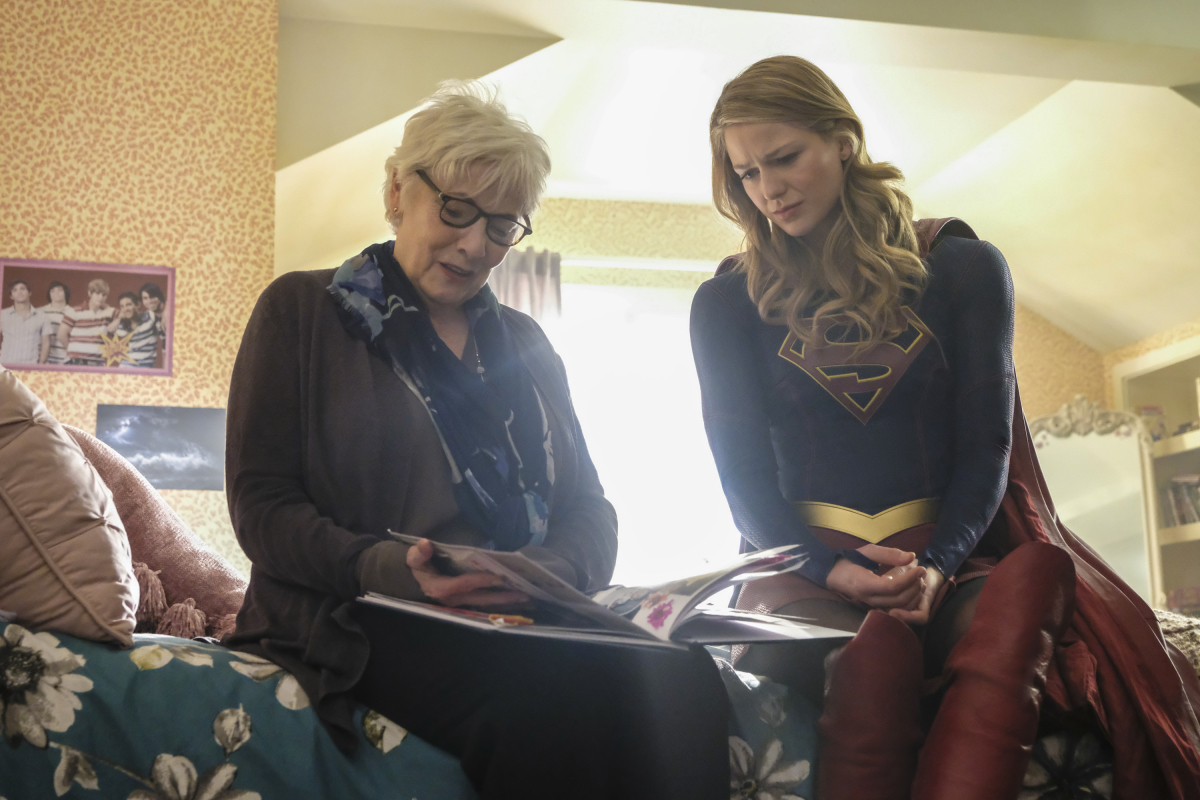 Rating - 4 (out of 5): The Worldkiller storyline has been a long thread through out this season. Samantha and Ruby were introduced early on giving us a glimpse into their cozy family dynamic. While we knew Sam was Reign she did not and watching her slowly discovering her abilities and head toward her "destiny" was a long journey but entertaining to watch, especially due to Odette Annable's performance. Now she's reached that destiny and more after ingesting the essence of Pestilence and Purity. The question is is Sam still in there and can she still be saved?

While the Legion is ready to leave Mon-El still seems to be conflicted. While he seems to be faithful to Imra he still pines for Kara. Meanwhile Brainy gives Winn some dirt from the future and tells him he's a 1.42 intellect. Of course Brainy has hidden listening devices in the jar of dirt and was only flattering Winn. Brainy always has an agenda. The morning after a wonderful night James and Lena are surprised by an angry and determined Reign looking for Ruby. Lena uses "kryptonite spray" (huh?) on Reign who then flies off. This leads to James convincing Lena to tell Supergirl that she can manufacture kryptonite because it may aide in taking down Reign.

The fact that Lena can somehow make kryptonite is curious indeed. On the one hand while it shows Lena isn't hiding pieces of the green stuff she still has access to chemicals to make it so she was hiding the truth from Supergirl and James. It is understandable that when Kara finds out she is very angry over the deceit. It's obvious Lena understands this and wants to help. But we later find out that Lena can no longer trust Supergirl even going so far to compare Supergirl to her mother. The fact that she can't trust Supergirl because she sent Guardian/James to look for kryptonite in her lab but she is fine with James for actually doing it is a bit confusing.

When the team is gathered at the DEO Lena tells Alex that she's hiding Ruby at Lex's mansion which has an invisible force field surrounding it to keep out unwanted visitors. Meanwhile Kara and J'onn show up at Sam's mothers to warn her that Reign is on her way. Her mother wants to confront her daughter to apologize for throwing her out years before and hoping to get through to her. Kara and J'onn say that's a bad idea. The three end up hiding at the house awaiting Reign's arrival. They don't wait long. A huge fight ensues in which Reign uses the powers of the other Worldkillers essentially letting Kara and J'onn know she now has the power of all three. Our two heroes hold their own but Reign gives as good as she gets temporarily putting down the heroes. Reign prepared to fly off but not before confronting and killing her mother.

The rest of the episode concerns Alex trying to protect Ruby at the mansion and a scene on the Legion ship where Brainy tells Mon-El that while the threat of Pestilence exists it will not affect their future but Supergirl and the rest have a better chance of defeating Reign if a member of the Legion helps. After a talk with Imra in which she tells Mon-El he needs to sort out his feelings for Supergirl he returns to Earth. J'onn realizes that M'yrnn may be able to help with the capture of Reign after his experiences with the White Martians. They learn that the Martians would not kill M'yrnn because he was the last to have knowledge of the scrolls. They had to keep him alive or their purpose would be for nothing.

After tracing Ruby's call back to the mansion Reign and our team have the final throw down. Using kryptonite and other weapons seem to only slow Reign but Supergirl makes Reign realize she can't kill Ruby because she would break her code as a Worldkiller to protect innocence. This stops Reign in her tracks and the team is able to subdue her. Sam is secured once again at Lena's lab with hope she can be saved.

While I don't feel this is an official ending to the Worldkillers arc it does give us hope as well as starting the show on its next big storyline that might be setting up stories for next season. While I can certainly nitpick about parts of this episode (Lena's hypocritical attitude, Alex conveniently leaving her phone where Ruby can get it to call her mom, etc) this did make for an intriguing episode and was fine with being a wrap up to the last few episodes. Not as strong an episode as it could have been but still entertaining. This season has been a strong one overall and I have high hopes for the next few episodes.