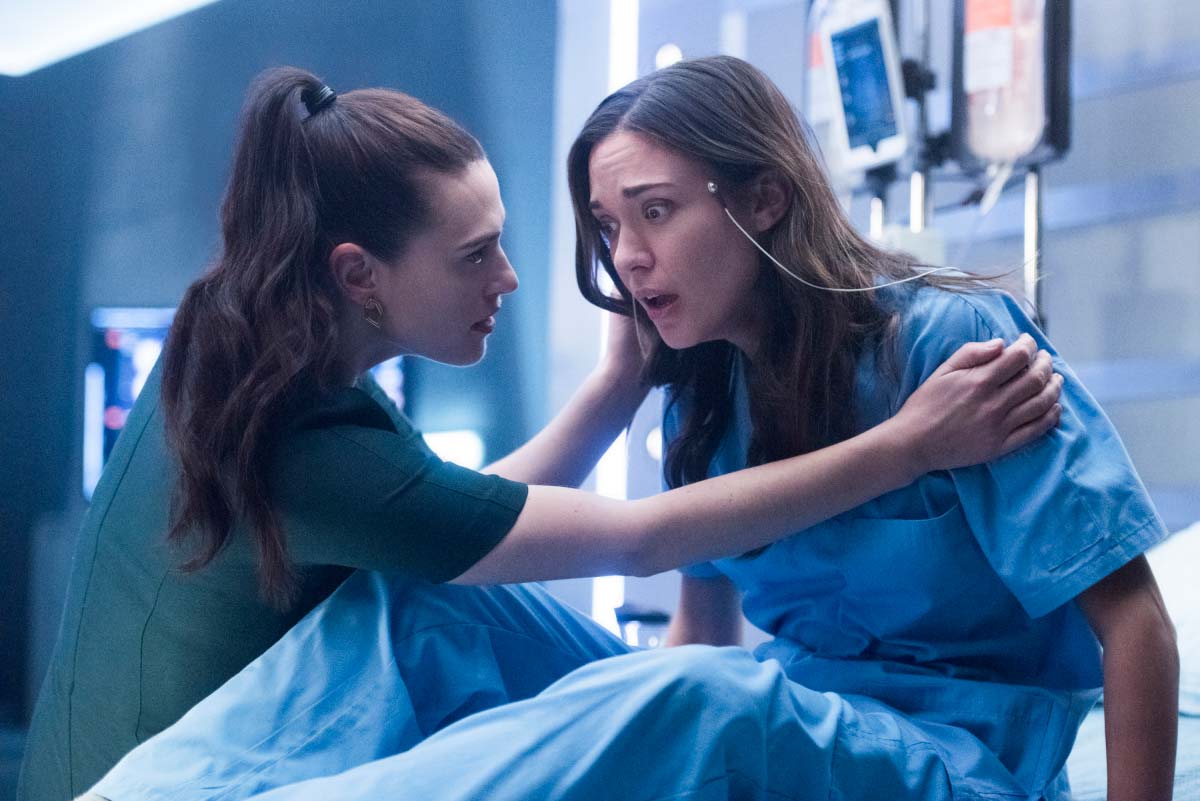 This week wasn't quite the destructive Kara versus Imra battle of wills that I expected, but we did see these two moral titans butting heads on the correct path to take - Kara standing strong on trying to save the person inside of Pestilence (Dr Grace Parker) and Imra insisting that murdering Pestilence is the only way to stop the blight.

While Kara might have compassion on her side, Imra had cold, hard experience - she's seen the future. She knows which chess moves bring about the blight, because she's seen it with her own eyes. And that's very hard to argue with - in those circumstances, one innocent lost to save many could easily seem like the right choice.

Add to that Brainiac (sporting Jesse Bath's genuine look here, which is likely surely no accident - it's a positive move away from his awful make-up) providing statistical probabilities - a 98.459% chance the blight will never happen, if they kill Pestilence, down to a 52.744% chance, if they try to save Grace - and it's even more difficult to stand on Kara's side of the argument.

The hunt for Pestilence - strangely, pronounced "Pest-ule-ence" by Brainiac and Kara, but "Pest-ill-ence" by Mon-El and Imra (I agree with the latter pronunciation) - took time to prove fruitful, but we got there in the end. I'm mostly happy with what Angela Zhou brought to the table here, but I think it's still a little early to tell.

What I loved wholly was Reign's The Empire Strikes Back-style moments (like Luke seeing Darth Vader in the Dagobah cave), where she came face-to-face with Reign - which she described as being "like facing your shadow - everything dark you've ever feared about yourself." It highlighted the fragility of the women trapped inside these Worldkillers and stressed Kara's goal - the need to get them out, alive.

Meanwhile, the death stakes on our team of heroes didn't feel real to me. Winn's emotional, "I might not make it" moment felt thin - almost pointless. It was clear that none of our regulars would die from this sickness, so other than getting to see Mehcad Brooks roll some tears, it didn't add much.

Hank's motivational speech to Kara about beating the odds and breaking through the impossible, as well the episode's unavoidable ending, both reminded me more than a little of Avengers: Infinity War's plot (which I won't go into here). It's a pure timing coincidence, no doubt, but it's kind of a cool one, as it doubly hammers home these shared themes of facing your foe, no mater how steep the odds, and of persevering, even if you lose anyway.

The ending gathered our witches three (Reign, Purity and Pestilence), finally, reminding me that the show has moved tremendously far away from the comic book Worldkillers, but also showing that these three will work well in tandem. It might feel like the season is nearly over (thanks, jarring hiatus), but we still have seven episodes left. That's a lot to play with, and with the next episode being titled 'Trinity', which promises an 'epic battle', it sounds like we'll be off to a good start.