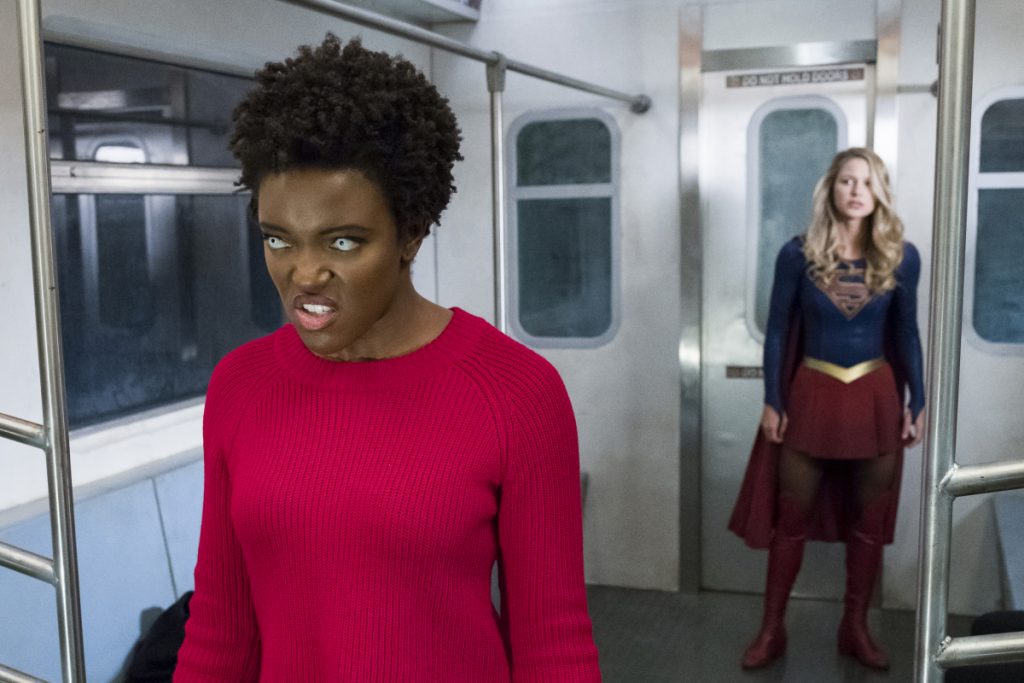 With a slight uptick in quality from last week, Supergirl bows out for another hiatus, giving Legends of Tomorrow and the other DC shows on The CW room to breathe in its absence. The show's post-holiday run only consisted of four episodes, and none of them matched the superior quality of Season 3's memorable beginnings. It's an indication that the rest of the season might continue to run on a bit of a duff note, but there's room to swing that around yet.

I wasn't sure about Krys Marshall as Purity until this week. Here, she showed that it's not as Julia that her acting ability shines, but when she plays Purity instead. Pale contacts donned, her performance came alive. As she offered up charmingly archaic phrases like "my sister and I" (the old-English, female equivalent of 'brethren'), her expressions writhed fantastically and her words hit home hard. It made me glad to have her in the role. And it made me wonder which other strong actress they've chosen to stand alongside Annable and Marshall as an equal.

The incarceration and interrogation of any unfamiliar villain is fun to watch, but it was a slow burn, watching Purity verbally spar with our heroes. Alex firmly took the position (via a strong monologue) that Purity had only been feigning the persona of Julia (and Purity claimed the same), while Kara - as open-hearted as ever - chose to believe that she saw a kind soul trapped beneath this Worldkiller.

This led to sharp-tongued bouts between Alex and Purity, with Purity spotting Alex's pain around Maggie and probing deep into the wound ("now you're just a broken little doll"). But just like Livewire's last minute reformation two weeks ago, Alex's hardened perspective didn't last. In the final act she apologized to Julia (albeit, to save Kara from death) for not seeing her tucked away inside.

The entire episode felt like 45 minutes of getting to know Purity, which was also designed to establish one very important notion: that there are ways to defeat villains without using violence. As Kara says: "Maybe we're not supposed to beat them. We save them." It's a strange concept when you first hear it - to save beings that were engineered solely to ruin worlds. But it's true to Kara's nature and I'm certain she'll resort to harsher means if her more merciful plan fails.

Whether Samantha - who Lena seems to think she can fix - or Julia will remain at the end of the season is anyone's guess. On the one hand, we could see them permanently reverted to their non-Worldkiller personas and written out of the show - alive and well. On the other hand, killing Samantha (and Reign) and freeing Ruby up to potentially be adopted by Alex seems all too perfect an alignment to not be one of the writers' ultimate goals.

The second half of the episode veered into clumsy choreography and transparent decisions to keep J'onn out of action. As soon as the action abates, the supposedly-all-important pillar suddenly no longer becomes a burden for him and he places it back on its post, as if he had been able to do so all along.

When the show comes back, it needs a little more of what made its early Season 3 episodes so great. That means more Kara content and less of the weaker characters. Another character I'd definitely love to get to know better is Imra, who Mon-El was completely honest with this week (after taking J'onn's advice), about his potential lingering feelings for Kara.

There seems to be a lot more to Imra that we haven't seen yet, beyond the secret reason for Brainiac-5 and her coming to Earth. Instead of a whole episode about Pentilence upon the show's return, I'd much rather the show gave us an episode about Saturn Girl - especially if it's Kara and Imra trapped and forced to work together. Amy Jackson has something great about her that's so captivating to watch.

Nine weeks is a long time to ruminate over the cliffhangers and over what this season's final act might bring. Some feel that Season 2's closing episodes took a nosedive, amidst the Damoxite war, so it would be nice to have something stronger this time around.