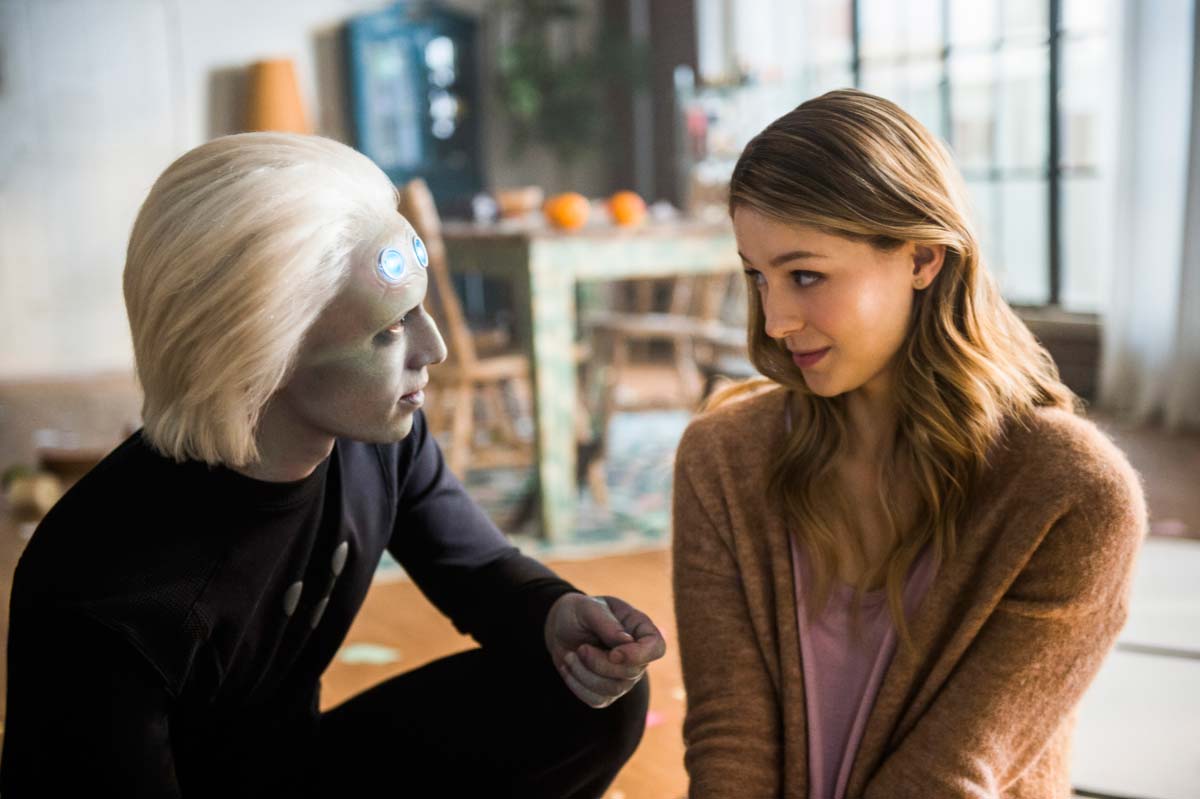 Rating - 3 (out of 5): "Our friend Ayla made planetfall and found it decimated." - Imra and Mon-El

The break left us with a broken Supergirl and a relentless Reign, as well as the lingering promise of the Legion of Super-Heroes. The show returned this week with an attempt to continue Reign's ravaging of National City (though only of criminals and the law), while sliding our Legion into gear. Jesse Rath joined the cast as Querl Dox (Brainiac-5) and Imra and Mon-El suited up, aligning with the DEO in a team effort to take down Reign in Kara's absence.

Saturn Girl's costume was near-perfect - as slick and dark as Reign's outfit, it's a modern take on the classic costume that's very welcome. Unfortunately, the same can't be said for Jesse Rath's makeup, which looks far more like a 12-year-old's slapdash interpretation of this staple character than the cosmetic work of a big time TV network with an ample budget.

The internet has been weighed down with unhappiness over this particular visual choice, and for good reason - modern audiences have come to expect high quality visuals and costumes from shows. When shows don't live up to this standard, I think fans have a right to complain. Especially given that the other The CW DC shows and this show itself have pulled off much better makeup jobs in the past.

On the whole, the show shies away from cosmetic enhancement - Reign could easily have had some applied, to bring her closer to her comic visage, but they opted against it (bar some fetching eye shadow). Seeing Rath, it hammers home just how right they were to leave Reign's face alone. His lax look here is even more ironic, given how wonderful he looked in makeup in SyFy's Defiance as Alak. In that, he's a shining example of makeup enhancing someone to the point where it actually suits them more than their natural look. If SyFy could pull it off, then The CW could have too.

I really missed the show's sly but earth-shattering references over the break and we got a few important ones this week. We had mention of a Sundown protocol - a contingency in place, should Superman ever turn against Earth (something not far from Injustice and Justice League's temporarily evil Superman). Streaky the cat was introduced - AKA Supercat in the comics - and we actually got to meet this famous feline, at least in Kara's head.

A much bigger reference came in Mon-El's monologue about future events (which could be a reference to The Great Disaster event in the comics). He explains that the planet Winath goes dark a thousand years in the future, and that fellow Legionnaire Ayla Ranzz (AKA Lightning Lass) arrives on this world to find it decimated by creatures called The Blight. Ayla is a famous member of the Legion who has electrical and anti-gravity powers.

Later on in the episode, we also got confirmation that the other Worldkillers will be inducted into the show (via Thomas Coville, who the writers seem adamant to keep around), to support Reign. If we're to meet some of the other Worldkillers, then we'll probably meet Ayla too. This means the teams on both sides of the moral line are being enlarged, with characters being added thick and fast. All of this implies that both sides will go head to head, in a battle similar to the one we saw this week, once their teams are fleshed out.

It's an unusual move for the show, which succeeded in opting for the slow and steady approach at the start of this season. It will bring things closer to the kind of heroic showdowns seen in Legends of Tomorrow or the four-show crossover events. It also somewhat reduces the gravitas of Reign. She's long been built up as the villain for this season, but this week saw her near-ruin and proved that she isn't strong enough to stand alone. She'll definitely lead the Worldkillers going forward, but this feels like a somewhat less-powerful Reign than the rampaging villainess shown to us in the pre-hiatus finale.

Between Brainiac-5's cosmetics crisis and the misplaced use of Bon Jovi (I find it off-putting when the show uses popular music to punctuate serious scenes, like the Britney Spears moment earlier on this season), this wasn't the return I was hoping for. The show thrived for most of Season 3's early run and I really hope that the back-end of this season won't reduce its slow and steady confidence into a muddled mess.

Just like Kara's answer to escaping her coma, I think the key here is to re-embrace Kara as the focus and not to overfill the show with an abundance of new characters. But we're getting them either way. Given how great Saturn Girl is, I have faith that at least a few of them will fit snugly and will be welcome additions. While others - like Brainiac-5 - are, for now at least, slotting in about as awkwardly as J'onn in Kara's dressing gown.