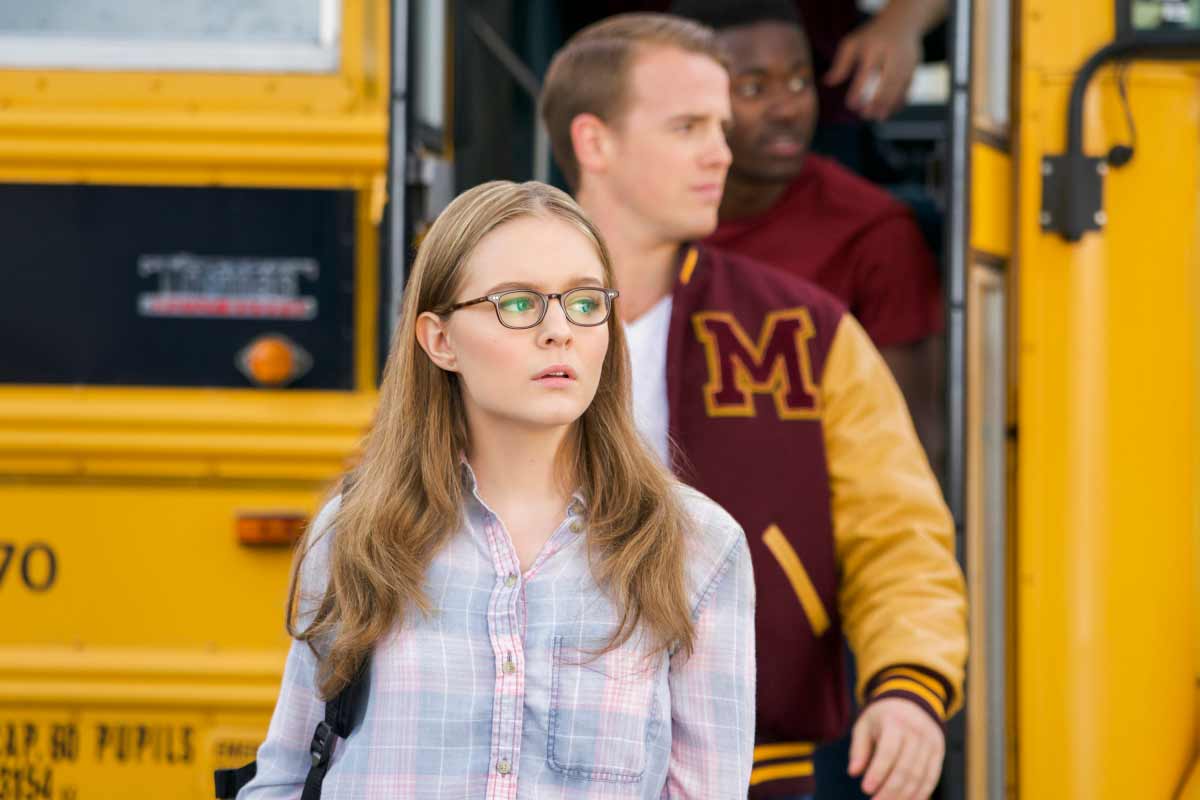 Rating - 4 (out of 5): "Someone's listening right now. Someone who can hear every single word you say. Every time you breathe. Can you feel it? She's coming." - Alex Danvers

Flashback episodes can be risky, for any show. When handled poorly, it's easy for them to come across as self-indulgent, time-wasting filler content. But handled right, they bring wonderful insight into the history and motivations of the characters we love. 'Midvale' always looked like it was going to be something a little different and out-of-the-norm is exactly what we got. I'm happy to say that it paid off immensely.

Following Alex's split from Maggie, Kara takes her sister home to Midvale - the charming, suburban town of their youth. Borrowing J'onn's classy car (secret spaceship) and trying her best to avoid running over stealthy possums, Kara's makes it her mission to support and be there for her sister. But Alex - still early on in her grief - immediately sees the irony in that and bites back at Kara's efforts.

"You don't get to do that," she tells Kara. "You don't get to shut down for 6 months, after Mon-El goes, and now sit here and tell me to talk." And she's right - the abyss that Kara dove into was far darker and deeper than anything we've seen from Alex's sorrow, so far. "Are you better?" Alex chides, implying that Kara is far from healed.

I'm really glad they acknowledged that, as the last few episodes haven't seen Kara exhibit any of that lingering darkness, but it's very clearly still there. Eliza highlighted this well, pointing out that she's more worried about Kara than about Alex, because Kara closes herself off. "You don't seem happy," Eliza tells her, seeing through her daughter's brave face.

Then the episode veered into flashback. Izabela Vidovic (Wonder) took on the role of a young Kara (sporting dyed blonde hair and blue contacts, to give her eyes that otherworldly glare) and Olivia Nikkanen (Boardwalk Empire, The Americans) took on the role of young Alex. While Nikkanen is new to the show, Vidovic actually played Kara in 'Far From the Tree' too. Both actresses were great, but it was Vidovic who shined for me.

She felt so suited to a young Kara that I even mistook her as Melissa in one small moment (as Kara entered through her bedroom window, I thought for a brief second that it had cut back to the present, before I realized it was still Vidovic). In some ways, she's even closer to comic book Kara than Melissa, facially, in my opinion. It's the kind of spot-on casting that makes you wish we could fast forward a decade, to see how Vidovic would feel in the role of an adult Supergirl.

At first, Kara and Alex are typical, bickering siblings, with Alex hating Kara for the impact that she's had on their family, and Kara going out of her way to annoy Alex. After their mutual friend, Kenny Li (played by Ivan Mok, whose performance here reminded me very much of Hayden Szeto's turn as Erwin in The Edge of Seventeen), is murdered, the girls brand together to solve the mystery of his death.

While the choice for the killer was rather transparent, the journey to arrive at that conclusion was excellent. I really got a feel for who these girls were in their early years. Kara felt like Kara and Alex felt like Alex. That's not only strong casting and skilled performances - it's great writing too.

Similarly as transparent was Erica Durance's Noel Neill turning out to be J'onn J'onzz. This was welcome, in a way, as it made J'onn come across as a life-long protector and guiding light of Kara's (think of Jacob in LOST). But I'm wary of retconning of this kind, as it feels like dangerous ground to toy with, if the writers even put one foot wrong on the details.

What a wonderful way to pay tribute to the actress Noel Neill, who first portrayed Lois Lane in the 1948 Superman serial, before returning to the role for the majority of the 1950s Adventures of Superman TV series (among other appearances in the world of Superman).

This week dropped perhaps the biggest reference that this show's ever given us. Early on in the episode, young Kara mentioned that Superman recently took down Lex Luthor, which is standard name-dropping, but later on we got a daringly direct reference to Smallville. Kara brings up Chloe, along with the 'wall of weird', and eventually Chloe helps to decrypt the drive for the girls.

Chloe was brought into DC Comics canon in 2010, but she didn't interact with Superman in those comic book appearances, which makes this a clear and very direct Smallville nod. That means the writers are effectively implying that Smallville is canon in the world of Supergirl. I'm not quite sure if the continuity completely lines up, to allow for that to be accurate, but if it does then good on the writers. It's a very bold move.

Kenny's demise (I'm avoiding re-making that South Park reference here) was the weighty shift needed to bring the Danvers sisters together. But the episode was full of light and levity too. I especially loved: "I just wanna live with Clark and be super," which was mighty cute. And on the subject of cuteness, Melissa's face seemed brimming full of freckles this week - something I've never noticed before - and they really suit her.

This was another episode where Melissa didn't have a great deal to do, but at least this time Kara did (as Vidovic). While episodes like 'Far From the Tree' made Kara feel like nothing more than a sidekick, this episode was truly and thoroughly about Supergirl. That's what the more recent episodes of Season 3 have been lacking and I'm so glad they placed Kara front and centre here. Where she deserves to be.