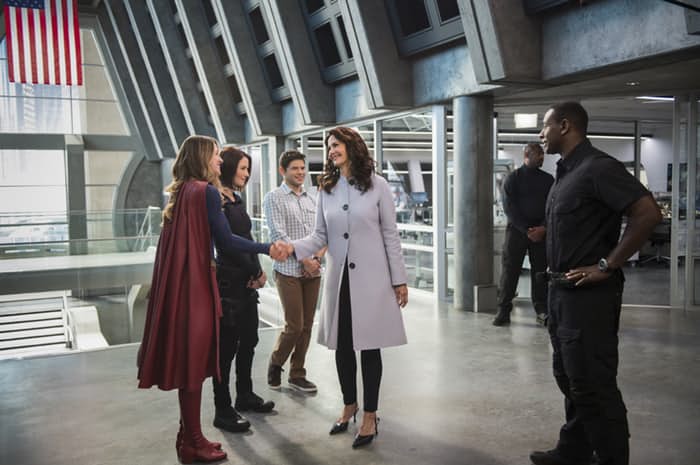 Rating - 2 (out of 5): The best line of the show, that hope can never be false, is drowned in a deluge of politics, new characters, plot twists, and 100 MPH pacing. One of the good things of Supergirl's move to The CW, was the palpable swift in movement when it came to story. The opening episodes were handled with care, and not rushed to cram the maximum amount of characters, Easter eggs, etc., within the allotted amount of time. This episode is reminiscent of those Season One episodes that were voluminous, yet nearly vacuous at the same time. The needless pandering to current events is handled as well as the aforesaid is being dealt with in reality, i.e., poorly. Immigration isn't a grayscale issue, and even as the episode itself shows, to the contradiction of its own theme, it's an issue for indisputable reasons of security and safety. The irony of the POTUS being an alien, underscores the need to look at the issue closely, since aside from Superman, Supergirl, and any alien they may vouch for, aliens tend to be of the creepy, evil sort.

Maggie Sawyer's introduction is confounding, as we learn more about her sex life, than we're shown any of her abilities as a crime fighter or detective. If her penetrating stares at Alex are any foreshadowing, Sawyer will be a recurring character, added to a cast that is tipping the scales with new jacks like Lena Luthor, Snapper Carr, and Mon-El... and Miss Martian, who was introduced with the subtlety of a sledgehammer. Supergirl has no proper antagonist, no proper direction, and while only three episodes in, this should have been the show to cement the path for the season. All one can really do after this episode is look forward to the next one, and hope that no extra characters are shaken from the DC tree, and that Supergirl uses the world it's built to deliver on the promise of its freshman year, though, sadly, this installment really shows signs of the dreaded sophomore jinx coming into play.