Season 2 - Episode 1: "The Adventures of Supergirl" 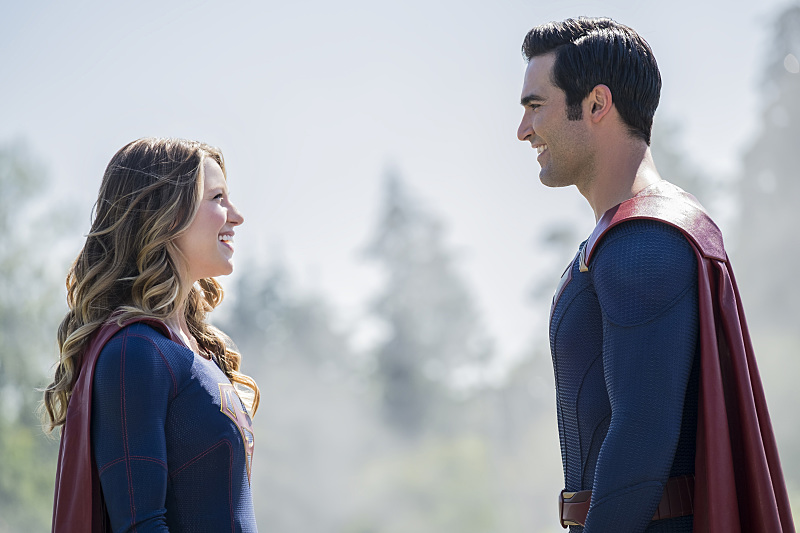 Rating - 4 (out of 5): The sophomore season of Supergirl begins with tying off threads from the last season, albeit without much satisfaction. The surprise in the spaceship, which was thoroughly spoiled over the summer, turned out be an unconscious lad (Mon-El!), though little was learned about him after hinging the close of season on his arrival. Jimmy "James" Olsen and Kara's romance fizzled completely, after a full season of cat and mouse... and Cat Grant's unsolicited advice for the lovelorn. Both decisions are understandable, as Mon-El was planned before the appearance of another character was given the green light. Kara and James, however, which started off with some appeal, were sapped of what spark they possessed by a season of indecisiveness. The fact their relationship would have been a mixed one, and that isn't a coy reference to Terran/Kryptonian relations, appeared to weigh more heavily than the creators expected, and there was no easy way to win. Still, these criticisms aside, Supergirl is back, with a little more swagger, all of the sweetness, and best of all, Superman.

Lena Luthor makes her introduction, providing a new antagonist for Supergirl, but not before we're reintroduced to the National City players, complete with the first, of hopefully many, recurring appearances by Cat Grant. Calista Flockhart's portrayal of Cat is a mixture of stock, farce, and impromptu, that all falls away when she turns maternal for Kara's benefit. In truth, Cat is the greatest maternal influence on Kara, the one offers advice, good or not, when she's pressed with the regular world. Winn, Alex, and Hank are all back to form, though with shortened roles as... OK, enough Tomfoolery, let me get to what I knew would happen and waited patiently for. A space craft is in trouble; it's going to crash. The world watches and hopes that he will be in time. The world hangs on with bated breath, and hopes that she will be in time. For the first time ever, we have Supergirl and Superman on screen, in live action together and it was done bloody well good.

The biggest argument from naysayers of Superman being on the show, was that he would steal Supergirl's thunder. "It's Supergirl's show!" they lamented. "Superman can't be there!" Yet, he was there, and so was she, and the show is still entitled, "Supergirl". They saved the craft together, adventured together, and while Superman didn't do the damage that so many presaged, he did provide humor, charm, and an alternative to the dour god that has been Superman in other media. Less Christopher Reeve, and more Kirk Alyn, Tyler Hoechlin has left his hirsute days on Teen Wolf, for the clean Man of Tomorrow, and leaves much of the criticisms about his selection in the after draft as well. Now, if he could just leave that horrible outfit behind as well.