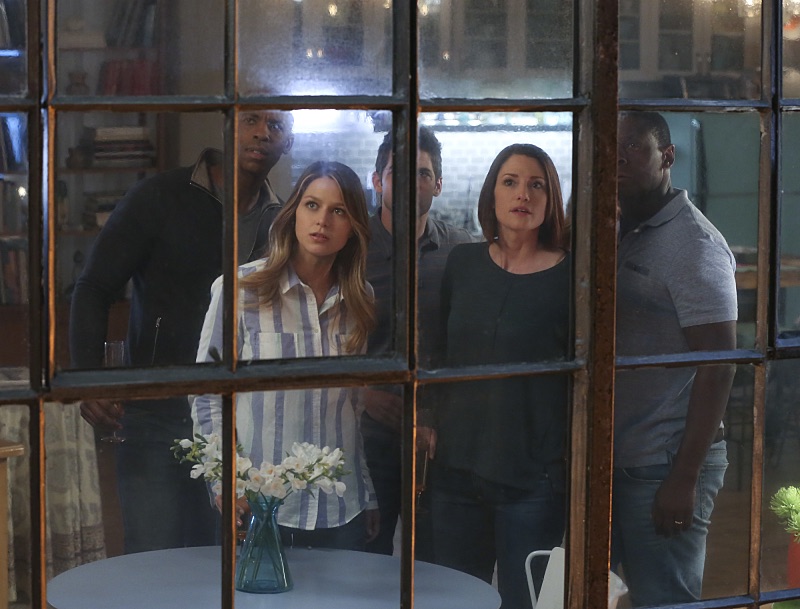 Rating - 4 (out of 5): It's been a remarkable year for Supergirl; a show that could have been cancelled when its ratings started to drop or when its storylines became a patchwork quilt of good, bad, ugly, and other. Even this episode opened with coin toss, where either a viewer will rock with a fight between Alex and Kara, or check-out as this critic nearly did. Episode 2 showed a plausible fight between Kara and Alex, but after all of the training and growth she's shown, to be at Alex's mercy was unsatisfying, even if it allowed Helen Slater to channel her own Supergirl. Supergirl, however, always compels a viewer to hold on, stay put, and watch on, in the wise choice of lead, Melissa Benoist. Scant minutes after nearly hitting the remote, you're rewarded with what you came to see: Supergirl being super, and in a manner that few characters will dare to do these days. It's interesting that Superman, a symbol of hope, and the idea of hope, have been simultaneously deconstructed over the decades. Hope needs to meet a certain standard, or else be deemed cheesy, campy, schmaltzy, or hokey, which are all the definitions for emotions that we'd rather not deal with, the ones that make us embarrassed, weepy, or, God forbid, hopeful. Currently it's easier to kill a man, than show concern for him, but Supergirl defies that self-conscious standard, and her speech to the people of National City, which rouses them from their forced reverie, is proof positive of the show's commitment to an inspirational figure, despite what trends may insist upon.

Kara's awkward goodbyes to Winn, Cat, Jimmy, are very heartfelt, but her discourse with J'onn J'onzz shows how much Supergirl has grown from the beginning. She's confident, assured, and willing to leave it all on the field to be certain that the world is safe. This culminates in her greatest feat of strength, and even though nicked (by the ridiculous notion that she needs to breathe in space) it doesn't resonate any less. Supergirl ends on a deserved high note, with a future as bright as it chooses to make, so viewers can only hope that they will make it a better one. Season One was littered with needless forced errors, an addiction over-packing storylines, and a reluctance to allow villains to grow to fruition. For future, all characters need space to develop, and all need space with Supergirl... except Alex Danvers. Alex, if the writers are sagacious enough to take their own advice, needs to develop a life outside of being a Mary Sue who's attached to Kara at the hip. That dynamic was introduced early on, but seeing Alex rescue Kara, while Superman is limited to his boots, was really hard to swallow. The Martian Manhunter, the Flash, have appeared, and the show never stopped being Kara's. That strawman has to be relinquished. The idea that Superman can't appear on the show because of the DCEU films is equal made of chaff, as there will be two Flashes in little more than a year's time, surely there should be no further impediment on something that would be beneficial to both characters. Until then, hope springs eternal.