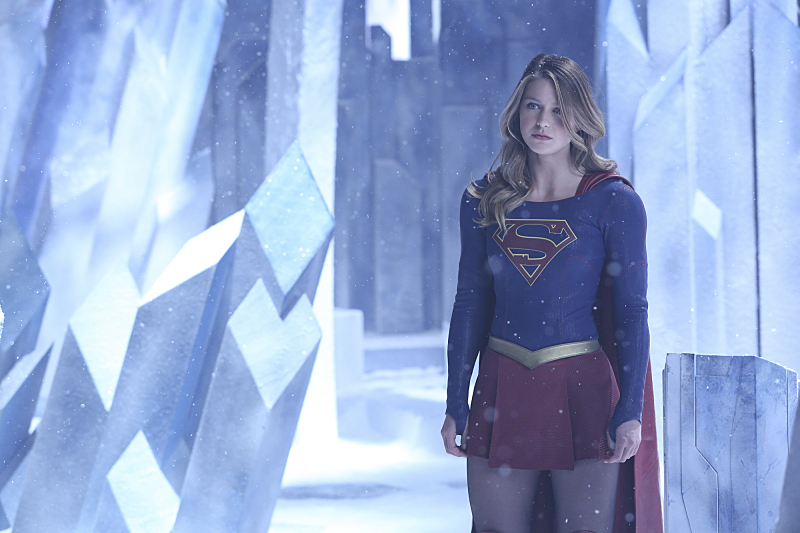 Rating - 3 (out of 5): "Myriad" started well enough for a penultimate episode with a very strong lead-in. Kara's fight with Maxima (a total throw away character) was well-choreographed, and the urgency of the situation was injected with immediacy. However, for this episode of Supergirl, I decided to view it with the mind of a detractor, if only for some sport. The aforesaid opening aside, it was a lopsided mess, filled with cliché and contrivances. Maxima lays waste to DEO agents, with the exception of Lucy Lane, of course. Maxwell Lord sends earrings to Cat Grant, who just happens to wear them in time for the Myriad takeover. Supergirl, who has also been raised on Earth the majority of her life, is immune to the effects of Non's plans, but Superman, most conveniently, is possessed. It's been years since the Fortress of Solitude debuted in Superman: The Movie, and yet its design is clung to out of desperation and resistance to creativity. Maxwell Lord had the makings of a good villain, but like Astra, he's been made into a redeemable character, therefore flaccid and uninteresting. Alex Danvers is the biggest Mary Sue since Onii-sama. There's nothing she can't do, she never listens to anyone, and if she wasn't so very necessary to absolutely nothing, she would have remained behind and safe, instead of being used to draw Supergirl into needless combat.

The first review I wrote for Supergirl highlighted the weaknesses of the show, and many of the aforementioned remain. However, Supergirl's biggest strength has always been its choice of lead, and in Melissa Benoist, the show finds a savior time and again. When she pleads with Kelex for aid, or looks on in horror at the dead body of a woman she was unable to save, even when she appeals to Maxwell Lord to do not what is right, but what is better, you believe her. You double-over when Lord acquiesces, but you believe in Kara Zor-El. Benoist maintains the core of the character, which is no mean feat, as Supergirl, as a character, had no such thing until Sterling and Gates' run on her volume previous to the New 52 comic books. That core is never betrayed, adulterated, or bartered for cheap and quick payoffs, rather, it's been developed over 19 episodes, and on full display in this installment. While Benoist has carried the show on her shoulders for an entire season, she cannot do it alone. A worthy adversary, an engaged supporting case, and a firm direction for the show in terms of story are very much needed; Supergirl has yet to decide what it wants to do, though it has confirmed what it wants to be. Hopefully the finale is strong and viewers will be the better for it.